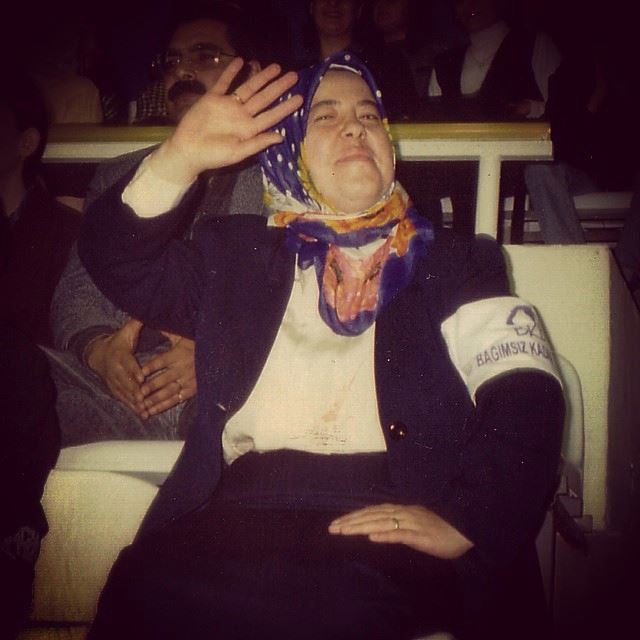 On 16 July 1998, Muslim feminist Konca Kuriş was abducted by three gunmen from her house in Mersin, after her husband was overpowered. Worried that Konca Kuriş would be yet another forcibly disappeared person, Istanbul Independent Women’s Initiative issued a press statement at Taksim Square on August 2. They stated that “they are in solidarity with all women who are under oppression and subjected to violence regardless of their opinion, political views, religious beliefs, or their perspectives on women’s problems,” and demanded that Konca Kuriş be found.

Konca Kuriş was not found for 18 months. In the first year after her abduction, Mersin Independent Women’s Association, of which Kuriş was a member, called government authorities to take action to find her. Bad news came months later from Konya’s Meram district. Konca Kuriş was interrogated and tortured by Hizbullah for 35 days and was killed. Her body, which could hardly be identified, was found in the basement of a cemetery house in Konya and interrogation tapes were found in a villa in Beykoz. Kuriş was targeted by Hizbullah because she was against the dogmatic interpretation of religion, was a feminist, and was outspoken about her feminist stance.

Below is an excerpt from the press release issued in the first year after her abduction by Mersin Independent Women’s Association:

“Unfortunately, we still haven’t heard from Konca Kuriş who has, with a different perspective, been involved in the activities of our association which embraces all women on the grounds of women’s problems and who has been particularly active in establishing a new women’s shelter. It has been a year since our member Konca Kuriş was abducted. We believe that she was abducted since she was a person who thinks, discusses her thoughts, explores her beliefs verse by verse, delving into each and every hadith from a woman’s perspective. Until today, we have tried to inform the public and express our demands by issuing press statements in accordance with the information we obtained from our visits to the governor’s office and police headquarter. We have sent our demands via fax to Rahşan Ecevit and the former Prime Minister Mesut Yılmaz. (…) We want Konca Kuriş back as soon as possible and alive as the day she was abducted. The government authorities’ efforts to find her is the manifestation of the importance they give to the development of women’s rights and freedom of expression in Turkey. Regardless of her tone and perspective, Konca Kuriş is a part of our struggle for women’s rights. More than that, she is a woman. We, the Independent Women’s Association, say no to any kind of violence against women and reprimand the violence she has been subjected to. We expect the government authorities to find her as soon as possible and transparently inform us and the public on the subject.”

All escapes start in the house / Interview with Sinem Taş