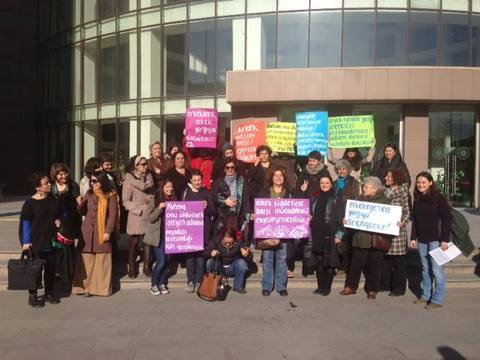 The male judiciary may make women’s revolt against male violence a subject of litigation. A case in point was the trial that Fatma Yürek (Şen) and Filiz Karakuş faced. Çetin Şen, who attempted to murder Fatma Yürek (Şen), was released after a few months of imprisonment just as almost all the other male aggressors. At the hearing on 22 January 2013, Fatma Yürek (Şen), disturbed by Çetin Şen’s offensive gaze, protested still having the surname “Şen” and said, “I do not want to carry an identity identified with you anymore”. As a result, Fatma Yürek faced a criminal complaint against her.

Fatma had come to the hearing on a wheelchair. Concerned about Fatma’s safety, Filiz Karakuş, a member of the Istanbul Feminist Collective, while helping Fatma go out of the building, pointed out that women who are subjected to systematic violence are killed despite the restraining orders and said, “Men are arrested only in cases when they kill a woman”. This led to the trial of Filiz, along with Fatma, as a defendant.

Many feminist lawyers and activists attended the hearings. Filiz and Fatma were acquitted.

Members of the Istanbul Feminist Collective made a press statement in front of the Bakırköy Courthouse on December 24, 2013.

Fatma Yürek applied to the police station to stop the violence she suffered during her 12-year-long marriage and received a restraining order from the court. However, one of the police officers at Esentepe Police Station forced Fatma to renounce this restraining order.

While the police dissuaded Fatma from her decision to demand a restraining order, Çetin Şen was determined to kill Fatma. To make this murder look like a suicide, Çetin Şen first forced Fatma to hang herself with two scarves wrapped around the gas pipes, then threatened her with a knife and forced her to jump off the balcony. During the trial, despite the evidence, Çetin Şen denied what he had done, saying that he was not aware of the scarf around the gas pipe or the knife in the hall. Because he knew that if he could make the murder look like a suicide, he would not be facing a murder charge and would get less punishment and maybe he would even get away with it without any punishment with the lies of “I love my wife so much”. In the end, Fatma had to jump off the balcony and stayed in a hospital for a long time. Right now, she is not fully recovered, and she cannot go out.

Çetin Şen was released after a few months of imprisonment. During his time in prison, he threatened Fatma with the letters he sent. Çetin Şen was very comfortable in the hearing which he attended as an unjail defendant in January 2013 and at which Fatma testified. He was harassing Fatma with his looks. However, the discomfort he caused did not have any definition in the law. But Fatma’s protests were very well defined in the law. Fatma, who cried throughout the hearing and felt even worse with Çetin Şen’s gaze, protested that she still had the surname “Şen” and said, “I do not want to carry an identity identified with you anymore.” Male justice considered Fatma’s reaction as an insult to the court and the chief judge asked Fatma to leave the courtroom saying, “Get out”, “Get her out of here”.

Feminists of the Istanbul Feminist Collective, who were following the case, were also in the courtroom at that time. Filiz Karakuş who helped Fatma, who came to the courtroom with a wheelchair, left the courtroom pointing out that women who are subjected to systematic violence are killed despite the restraining orders and worrying about Fatma’s safety, said, “Men are arrested only when they kill women”. Filiz’s act was also considered an insult to the court.

The first hearing of the case was held on 17 September 2013 in Bakırköy Criminal Court of Peace. At the hearing the issues of “male violence against women” and femicide were raised. It was revealed once again in the courtroom that restraining orders were not enough to prevent male violence, that men who perpetrate violence walked away freely, and that women had to die for those men to be arrested.

In the second trial, Fatma Yürek will testify. Fatma did not bow to Çetin Şen’s threats. She did not accept offers of reconciliation. She preferred independence, taking the risk of dying. She resisted.

Today, Fatma got rid of her husband’s threats. Because Çetin Şen was shot and killed.

However, Fatma still carries the traces of terror that her husband instilled in her: she is unemployed, her leg is injured, and she is in a never-ending pain! She cannot walk comfortably. She cannot go out on the street without a companion. On top of that, she is facing a trial…

The law cannot respond to murder of women despite the restraining order, to the failure of the police to protect women, to the prosecutor’s failure to investigate, and to the release of men who use systematic violence. But we learned during this case that the law does have a response when a woman angrily throws her ID since she does not want to carry the surname of the man who subjected her to violence or when women point out that violent men walk away free and are only arrested in cases when they kill a woman.

The struggle of women healthcare workers during the COVID-19 pandemic*

The Struggle for Peace by LGBTI+ and Women’s Organizations in Turkey...