Enforced disappearance through which the state targets the political opponents and aims at intimidating those who are left behind became systematized in Turkey in the 1990s. Truth Justice Memory Center (Hafıza Merkezi) collected the lists produced by the institutions working in the field and found out that since 12 September 1980, 1352 people were forcibly disappeared. Turkey’s politics of “enforced disappearance under custody” was particularly deployed against the Kurdish population in the regions of state of emergency in the 1990s. Those who were forcibly disappeared in the cities such as İzmir, Ankara, Adana, Mersin, and Istanbul were socialists. This common state practice was exposed after the Saturday People/Mothers demonstrations. 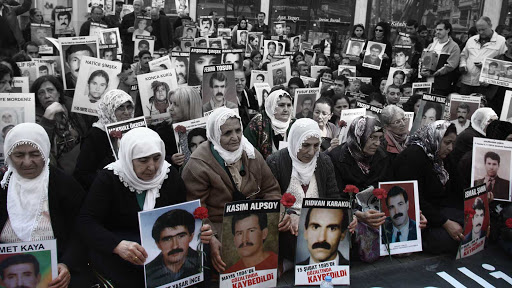 The proposition to initiate sit-in protests against enforced disappearances in Galatasaray Square, known to the public as “Saturday Mothers”, came from a group of human rights defenders, mostly women and feminists.

The tortured body of Hasan Ocak who had been missing since 21 March 1995 was found 55 days later, on 17 May 1995, in the potter’s field. His family and friends made their best efforts, starting from the first day that they could not hear from Hasan, and they managed to make it public that Hasan was forcibly disappeared. When Hasan’s body was found, his family held a press conference. Right defender Nadire Mater attended this meeting and conveyed it to the “Don’t Touch My Friend” group. In the press conference, “We have to do something” was the general feeling shared by everyone and the idea of the necessity to take a long-term action against enforced disappearances emerged. Inspired by Argentine’s Mothers of the Plaza de Mayo, a proposal by right defenders Nadire Mater and Erkan Kayılı to take permanent action was discussed. Some ideas such as sitting in and playing music and taking a silent tour in the field were ruled out. The idea of organizing a silent sit-in for half an hour without slogans, banners or the name of the organization was accepted. The intention was to take a continuous action in a plain, clearly demarcated format with clear demands in which individuals could attend and feel a part of. The organizers made a call for a meeting at IHD in association with Human Rights Association (IHD) Istanbul Branch Commission against Enforced Disappearances. A handful of human rights defenders, most of whom were women, and four families whose relatives were forcibly disappeared attended the meeting and the demonstration proposal was accepted in this meeting. On 27 May 1995, 20-30 people, including the relatives of the forcibly disappeared, sat in against the enforced disappearances in silence in front of the Galatasaray High School and finished the demonstration to meet next week. All women organizing the “Don’t Touch My Friend” campaign were at the demonstration. Without reading a press release, it was announced to the press that the sit-ins would continue, demanding that “enforced disappearances come to an end, the fate of the disappeared should be unveiled, and the responsible parties should be found and prosecuted.” 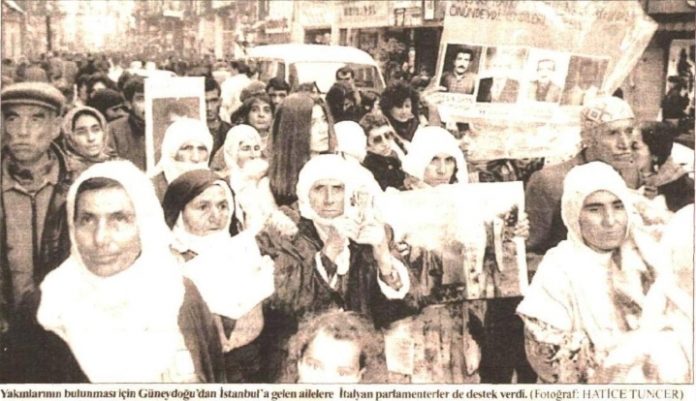 In the 44th week of the demonstration, dozens of relatives of those who were forcibly disappeared came to Istanbul from Diyarbakır, Batman, Cizre, Lice, and Kulp to participate in the demonstration and told the truth about the enforced disappearances in the region. During the press release that day, it was announced that according to the records kept since 1991, the number of the forcibly disappeared in the region has reached 218. In the following years, it turned out that this number was not even one fifth of the number of enforced disappearances in that period.

In June 1996, after the first year of the sit-ins, the demonstration came to be known as “Saturday Mothers” in Turkey and in the world despite the fact that the press releases which followed the half an hour sit-in were signed as “Saturday People”. However, the Galatasaray sit-ins were not the demonstration of mothers of the forcibly disappeared people as in the case of Argentine’s Mothers of Plaza de Mayo. In fact, among the relatives of the forcibly disappeared, who were part of the action, mothers were not even the majority. 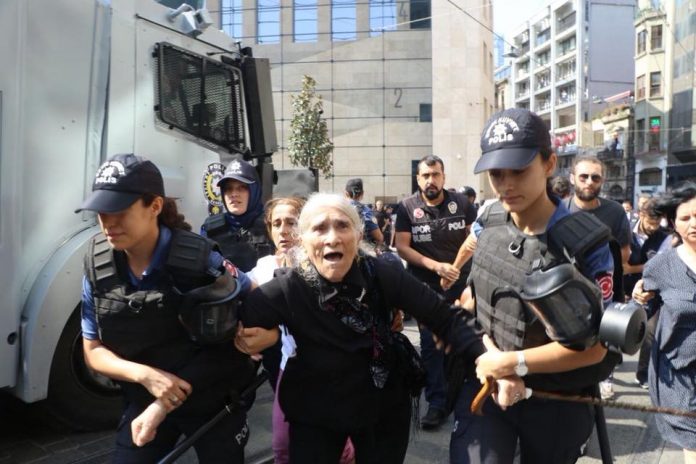 On 8 June 1996, the police attacked the Saturday People demonstration which was held during the Habitat II Summit on Human Settlements. On the same day the Confederation of Public Employee’ Trade Unions (KESK) made a call to Galatasaray for their demands at 13.00. The police attack started at 11.30 spreading to Istiklal Street. More than 600 people were detained. The following week police, once again, stopped the Saturday People’s demonstration. For six weeks, the state stopped the demonstrations by detaining the demonstrators and using violence. Following the demonstrations at Galatasaray every week,  Saturday People sometimes spent a few days or Saturday afternoons in custody. The relatives of the forcibly disappeared people were dragged on the street. The photos of the Saturday Mothers being dragged on the street and taken into custody were widely covered in the media, and this situation caused reactions. All the columnists were writing about the Saturday Mothers and the enforced disappearances. Sezen Aksu’s song for the forcibly disappeared was widely circulated at the time when the police attacks increased. In the sixth week, the state had to take a step back. It was announced by the highest-ranking official, the Minister of Interior Mehmet Ağar, that the Saturday Mothers demonstration would be permitted.

The demonstration grew stronger every week by extending the testimonies about the enforced disappearances. Testimonies from regions largely populated by the Kurdish people were exposing what happened during the state of emergency. The state had decided to prevent this demonstration which revealed the dark side of the state. Police attacked the demonstration on 9 May 1998 and detained the demonstrators. This attack was not repeated in the following weeks. On 30 May 1998, the Argentinian Grandmothers joined the Saturday People/Mothers at the Galatasaray Square. 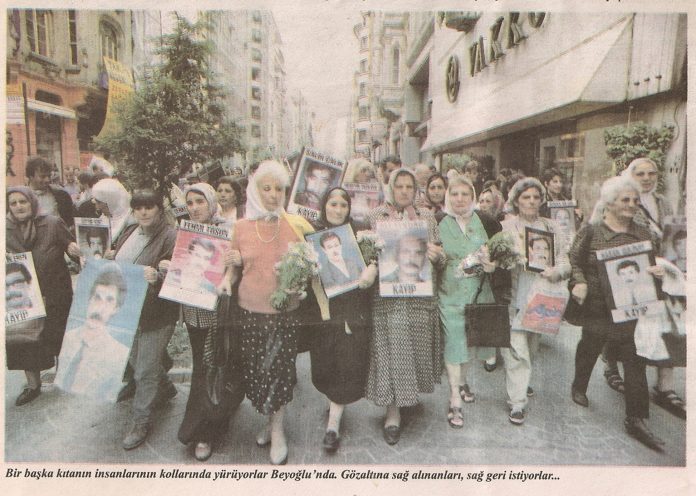 Attacks by the law enforcement started on 15 August 1998, at the 170th week of the sit-ins, and continued for seven months. Every Saturday, the demonstrators were detained, for 31 weeks in a row. The Saturday People/Mothers consisting of the relatives of the forcibly disappeared people and the human rights defenders collectively decided what to do for 31 weeks and on 13 March 1999, they decided to indefinitely suspend the Galatasaray sit-ins.

The demonstrations were suspended but the campaign against the enforced disappearances did not weaken. On the contrary, it resonated with a much broader section of the society. Especially the IHD Istanbul Branch Commission against Enforced Disappearances, the International Committee Against Disappearances (ICAD) which was founded in 1996, and the Association for Assistance and Solidarity with Families of the Forcibly Disappeared (YAKAY-DER) established in late 2001 made this struggle all the more organized.

After a ten-year break, at the time when the Ergenekon indictment was filed, the Saturday sit-ins resumed as the 201st week demonstration on 31 January 2009. The demonstrations still continue in Istanbul. The “Ergenekon” case was important in that it was an official confession of the crimes committed by state officials. The confessors stated that they had served in Kurdish provinces for years and, if desired, the massacres of the region at the time could be enlightened. In that period, the demonstrations overflew Istanbul. The Saturday People/Mothers started organizing in Diyarbakır, Cizre, Batman, and Yüksekova. 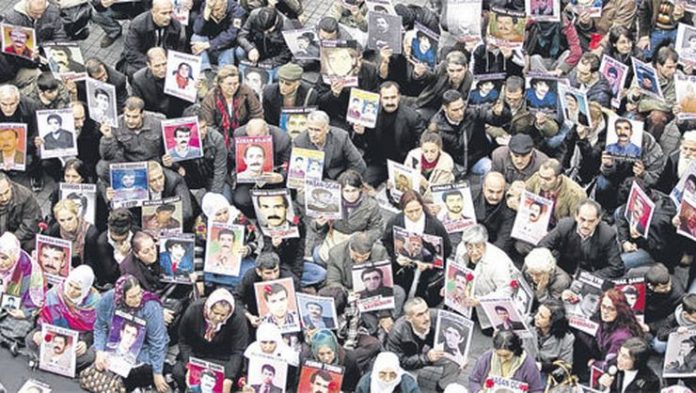 The Saturday sit-ins continuing since 31 January 2009 is organized by the Saturday Mothers and the IHD Istanbul Branch Commission against Enforced Disappearances. Relatives of the forcibly disappeared people asked about the fate of their relatives on the one hand, they filed an application for the soldiers mentioned in the Ergenekon case to be held accountable and prosecuted, on the other. It was demanded that the Ergenekon investigation be extended to the other side of the Euphrates river. The indictment which was prepared with the statements of those detained under the scope of the investigation and the testimonies of anonymous witnesses as well as other evidence mapped out the crimes committed by former military members. Some mass graves were excavated, and other high-ranking military members were indicted. However, when the intra-state conflicts were settled down, all these cases were shelved, and the lawsuits were closed without any penalty to senior officers.

Stating that “Enforced Disappearance is a crime against humanity!”, and demanding that “The forcibly disappeared should be found and the perpetrators should be punished!” and “The UN Convention for the Protection of All Persons from Enforced Disappearance should be signed immediately and without any reservation!”, the Galatasaray sit-ins organized by the Saturday Mothers and the IHD Istanbul Branch Commission against Enforced Disappearances were prevented and banned on the 700th week by a Ministry of Interior decree. However, the demonstration continues in front of the IHD Istanbul Branch. At the end of each press release, they express the determination “We will not give up on Galatasaray.”

I tried to write this “From Our History” piece over my 170+31 week-long experience as a witness. Undoubtedly, other people who have experienced the same period can express it differently. The reason why the Saturday People/Mothers demonstration has been so long-lasting and has received so much public attention is due to the determination of the subjects who lost their relatives and have been the driving force of this demonstration. If it were not for parents, siblings, spouses, partners, friends, and relatives of the forcibly disappeared people who extend their struggle to their children and grandchildren and who have been owning the struggle from one generation to the next, this demonstration would have not had the determination to continue after all the interruptions.

Among the relatives of the forcibly disappeared women were at the forefront. Also, it would not be an exaggeration to say that the presence of women[1] who came to Galatasaray every week despite not having lost a relative and who took part in the organization for the first four years significantly contributed to the continuity of these demonstrations. Nor would it be an overstatement to say that these women had an impact on the socialization of the struggle against enforced disappearances by bringing in their experiences from human rights and feminist struggles as well their ways of doing politics.

Femihat Answers: The streets are ours, what about profanity?