We know that the main intention here is not only to make LGBTI+ people the focus of violence, but also to naturalize the discrimination faced by women by eliminating the word gender and, hence, maintaining domination over women. 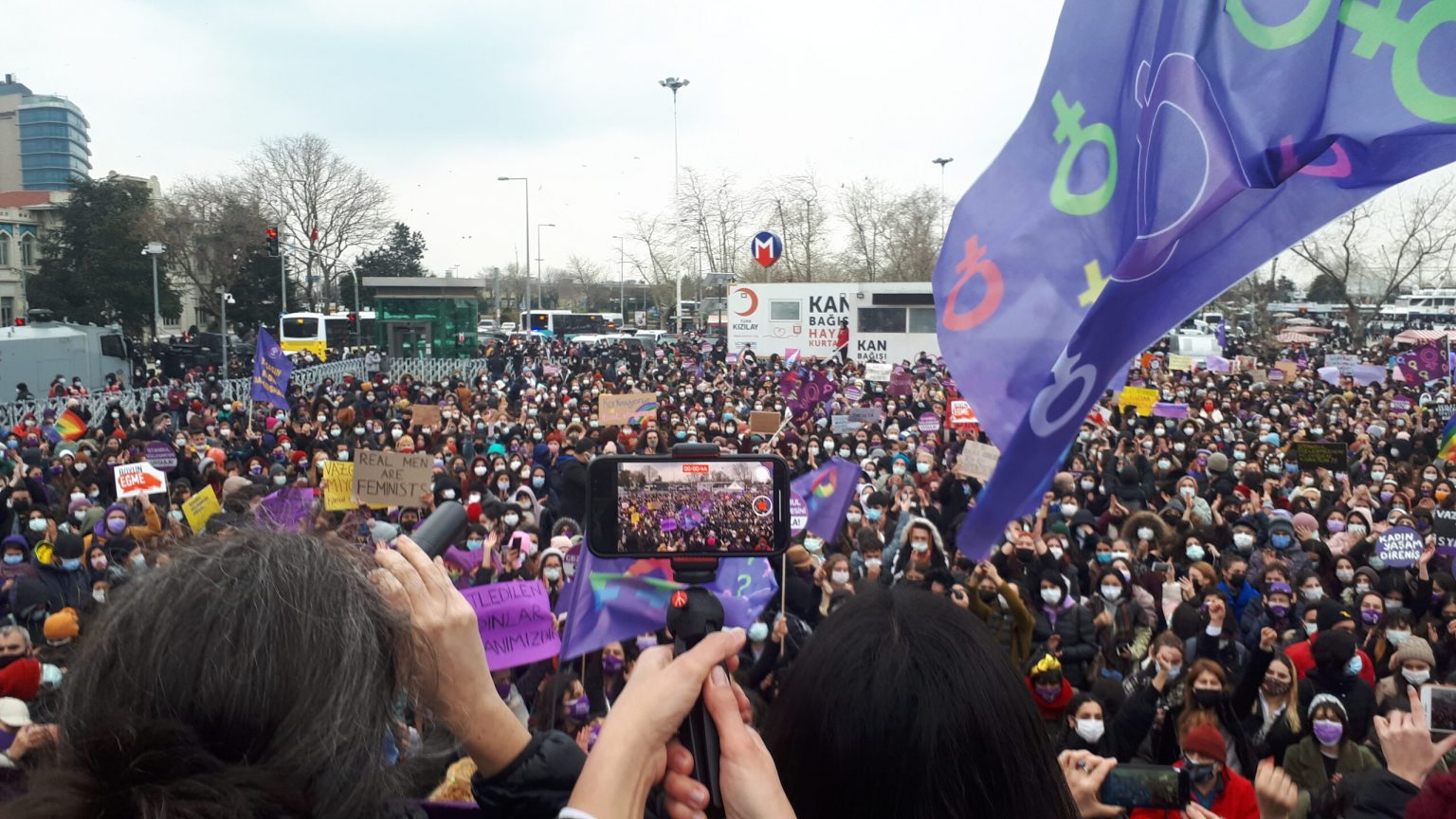 The opposition to the Istanbul Convention, which had been particularly started underhandedly by the media organs that I do not even bother to name here, became a topic of public debate during the last summer for the first time. This opposition, which was voiced by religious conservatives and various Muslim orders and which would have merely remained as marginal voices if we had lived under rule of law, found its way first into the government and then into the public opinion. In no time, the debates spread all over Turkey and the scope of the discussions expanded beyond the convention itself. Ordinary citizens disseminated and defended the articles of an international convention knowing that the Istanbul Convention was used as a pretext by those who brought it to the agenda in order to spread hatred against women.

At the foundations of the information pollution spread by the anti-convention people lie the hatred towards LGBTI+ people and irrational fabrications such that the convention leads to an increase in women killings and destroys the family, statements which emanate from the inability to directly and openly state that women should be subjected to men. We know that the main intention here is not only to make LGBTI+ people the focus of violence, but also to naturalize the discrimination faced by women by eliminating the word gender and, hence, maintaining domination over women.

What we just experienced on Friday night provides us with a picture of the context we live in. As the news of withdrawing from the convention was whispered by various resources before it was published on the Official Gazette, some internet trolls had already been waiting for the announcement and celebrating with their tongues hanging out. As we waited, constantly refreshing the Official Gazette webpage, the decision was announced. This is a decision taken and signed by one person who has endorsed the statements of extremist groups without even giving a say to the parliament let alone considering what women and organizations working in the field have to say on the matter. Even the method itself shows us once again that we do not live in a democratic country and this state does not see women as subjects and appropriates women rights and offers them to men as gifts.

The official statement issued by the Directorate of Communications states that the convention had been “manipulated” and deviated from its aim but that the state was determined to struggle with violence against women. These words were uttered in a context where there was a convention which had not been implemented even seven years after it was signed and where even the Law No. 6284, that is, the law codified by the state itself, is implemented arbitrarily by the state officials. By the way, we also witnessed a state expressing that it was manipulated by its citizens. What is actually manipulated here is the scope and aims of the convention; and the manipulators are those who wanted the renouncement of the convention. If we come back to the statements and discourses of those who argue that women killings and violence against women have increased during the period when the Istanbul Convention was in effect, we see that state’s non-implementation of the regulations stipulated by the convention to which it is a party is being used in a manipulative manner to twist the truth about the Istanbul Convention and to argue that it is faulty and inadequate. How come LGBTI+ people, who were not able to “manipulate” the state in order to include “sexual orientation and gender identity” clause in the Article 10 of the Constitution despite years-long struggle, managed to manipulate the convention will remain a mystery.

As it has been previously expressed in AKP’s [Justice and Development Party] report card which we have compiled, all the things that AKP claimed to have done for women and that can be labeled as positive are either processes that have begun before AKP came to power or developments such as the Istanbul Convention that have been carried out with the intention of addressing the international community. We are also able to trace through this report card the gradual escalation of the policies aiming at the strengthening of the family. In recent years, we see our rights being usurped and our access to existing rights being curtailed in practice each and every day. From birth control to social assistance, from our struggle against violence to daycare centers, many of our rights are gradually lost to policies which aim at imprisoning women in traditional roles through subordinating them to the family/men and rendering women’s labor into cheap labor for the market. In order to be able to enjoy our current rights, we have to fight. While bad practices and stonewalling of our access to our rights are promoted by way of ignoring them, impunity prevails in the courtrooms. Whereas the pandemic, which accrues to the increasing poverty, renders the lack of comprehensive social assistance and support more visible and forces us into despair, the Presidency of Religious Affairs’ budget and role in our lives keeps on growing each and every day.

As a result of the shrinking and even disappearing freedoms of expression, organization, and demonstration due to authoritarianism, oppression, detentions, and arrests, the social movements are being silenced. The main reason why women can still be on the streets in the midst of all this is because the government lacks the power to polarize women and delegitimize our rightful demands. When even KADEM, a government project created with the intention of fighting against feminism, supported the Istanbul Convention, the “homosexuality” card is used to silence KADEM. It is utterly obvious that the new strategy is to destroy our rights by claiming that the government will provide the best care for women.

Pink Life LGBTI+ Solidarity Association: “The decision to withdraw from the Istanbul Convention is the declaration of what is obvious.”

Why does the number of women who are interested in computer...