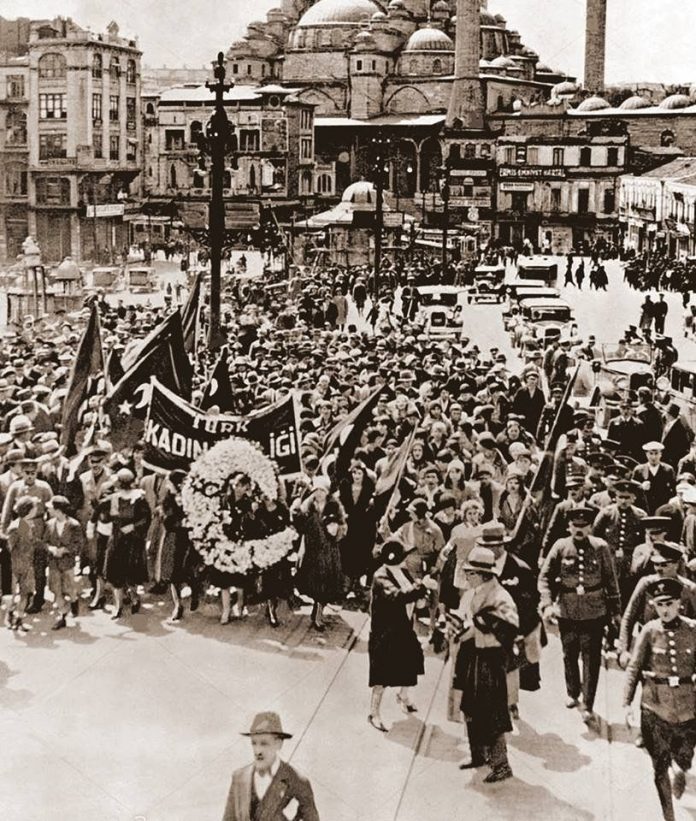 The association which was initially founded on June 16, 1923 as the Women’s People Party and later changed to Turkish Women Union (as women’s petition was rejected on the grounds that women do not have suffrage) on February 7, 1924, held its first rally in Istanbul on April 11, 1930.

“We, Turkish women, must assume the place we deserve in social and political life. First, we must raise awareness of and educate Turkish women. We must tell them to want more and how to get it. Our goal is economic, social, and political equality of women and men in Turkey.”

After women’s attempts to nominate women MPs in order to gain the right to vote in 1925 and 1927 were rejected on the grounds that it was not constitutionally possible and following the years-long struggle, finally gained the right to vote and right to be elected in municipal elections in 1930. In the same year, the Turkish Women’s Union organized their first rally on April 11, in Istanbul to celebrate this development. Nezihe Muhiddin, who had been purged from the Women’s Union after 1927 was denied giving a speech at the rally although she spent years in this struggle. In response, Nezihe Muhiddin stated that this right was a “blessing” of the government and was not a success of the Turkish Women’s Union’s members and administrations at the time, who described the association as a “charitable organization”.

Cumhuriyet newspaper covered the rally at the frontpage under the title of “There is a rally today” and wrote, “This is the first public appearance of the Turkish women who gained the right to elect.” In the itinerary given in the news, it was said that the women would meet at Sultanahmet at 9.00 and make statements in front of the building of the municipality, the Turkish Hearth, the Governorship, and the Turkish Women’s Union. They were later going to go to Taksim Square (!) via Eminönü, Karaköy, Şişhane, and Galatasaray and leave flowers at the Republic Monument at the Taksim Square.

However, the process of gaining political rights for women was tough. The Turkish Women’s Union’s activities demanding political rights did not receive support, they were criticized by many people, including Yunus Nadi, the owner of the Cumhuriyet that reported the rally, and their activities were found “too much”. Only a few months before women gained the right to vote and be elected, on April 3, a caricature belittling women’s rights claims was published on Cumhuriyet, setting an example of such an attitude. In a similar vein, the following are the statements from another news article of the newspaper dated 21 June 1927: “Having women MPs might not be too bad, after all. Discussions around fashion will often take place in the Parliament. Undoubtedly, male MPs will listen with curiosity and with a smile on their faces the heated debate between the deputy women of Izmir and Istanbul about whether it would be more appropriate for ladies to wear tuxedos or décolletes at balls.”

Likewise, in June 1927, Akbaba, a humor magazine at the time, published the following article: “How wonderful! Some of our ladies have blossomed, effervesced so much so that no one can catch up with them…! This enthusiasm for masculinization, which started with haircuts, went one step further by coming to the balls in a tuxedo, and finally, we heard that it reached the point of deputyship. The front pages of the newspapers are nowadays full of Nezihe Muhiddin’s infinitely repeated ten-year-old depictions, political rights, social rights, and civil rights of women. I consider it a little dangerous that our women, who were sitting in a cage like a finch until a few years ago, suddenly turned into hawks and wanted to take off to the national assembly on their account, but especially on our account. It would be much better, much more helpful, and much more lady-like thing to do if, instead of teaching young girls political rights, the Turkish Women’s Union gave conferences on housework and childcare and, instead of forcefully putting pins on men’s collars to collect donation for their prospective right to vote propaganda during the holidays, allowed the charitable organizations such as Hilal-i Ahmer, Himaye-I Etfal, and Tayyare Society to benefit from the benevolence of the people. Long story short: we have no intention whatsoever to allow our women with manicured hands in the National Assembly– the council of warriors.”

The political mobilization of the Turkish Women’s Union in 1925-1927 and their demand for political rights resulted in the discharge of Nezihe Muhiddin from the Union. When she was elected president at the congress on 25 March 1927, she said that the Women’s Union was not a “charitable organization” and that it was established to gain women’s social-political rights. Her speech drew lots of reaction. Following the congress, some rumors started circulating that the congress was organized irregularly. However, after investigating the congress, the governorship decided that there was no such situation. Later, Nezihe Muhiddin, started working in August 1926 for opening a women’s camp which will serve women and girls for education and recreation purposes in Heybeliada so that women could benefit from the entertainment and recreational life which was thought to be peculiar to men and from which women were excluded. Besides, she announced that an excursion to Değirmendere would be held on August 30 to raise donations for the Union. Both of these activities were prevented. First, during the camp opening on August 25, law enforcement stopped the opening, claiming that the camp was unauthorized. A few days after the camp was closed, the excursion to Değirmendere was cancelled upon the governor’s order. Regarding the closure order of the camp, the police chief said that the camp was not officially authorized by the governor. In a news article on Cumhuriyet on August 29, the reason for closing the camp was given as follows: “A camp is a camp for girls or for women. The girls’ camp must be authorized by the ministry of education. The women’s camp must receive authorization from the police. Having women and girls together is not appropriate.”

The April 11, 1930 rally was taking place after all these discussion and turbulent processes. Therefore, the rally itself brought about some discussions. First, the fact that there were more men than women at the start of the rally was criticized. Women’s participation in the rally increased at noon. The head of Women’s Union, Latife Bekir, gave the following speech: “Turkish women have entered the civil service and the professional life and have become successful. Their merit in these fields has inspired trust in our government. Today, women were given the right to elect and be elected in the municipality. Women, who have cried with her man in every period of this country, who have worked and defended her country from the fields to the trenches in snow together with her man, who have kneaded every inch of this country’s soil with the blood of her child, until now, have not been allowed to take part in the affairs of the country. What is expected of her is sacrifice in the fields, at home, in the trenches and she shows this sacrifice. However, the right to participate in the administrative affairs of the country has been kept at bay from her. The government of our Republic has given this right today.”

The next day, newspapers that found low the number of women who participated in the rally were criticizing the Women’s Union. On April 13, in a column in the Cumhuriyet was evaluating the low participation of women in the rally as an indication of their “insufficient” response to the right that is given to them. Nezihe Muhiddin with her words “Women’s Union no longer exists today” was holding responsible for this situation those who turned the union into a charitable organization. Women from Ankara who found the meeting unsuccessful also declared that they decided to hold a new rally in Ankara for the passing of the municipal law. The members and the head of the Women’s Union, Latife Hanım, stated that the rally was successful and that it is not true that the participation of women was low. Nevertheless, this rally and all those things that happened before and in the aftermath of the rally witnessed very important discussions on Women’s Union, women’s political will and organization, the intervention by the administrative authorities in the union, the ways in which women do and participate in politics, women’s place and the question of whether this is a “right” or a “favor”.

After women won the right to elect and be elected as village elders in 1933 and the right to enter the parliament in 1934, the Women’s Union would organize the second big women’s rally on December 7, 1934.

27 May 2012: First response from feminists to prime minister’s statements...