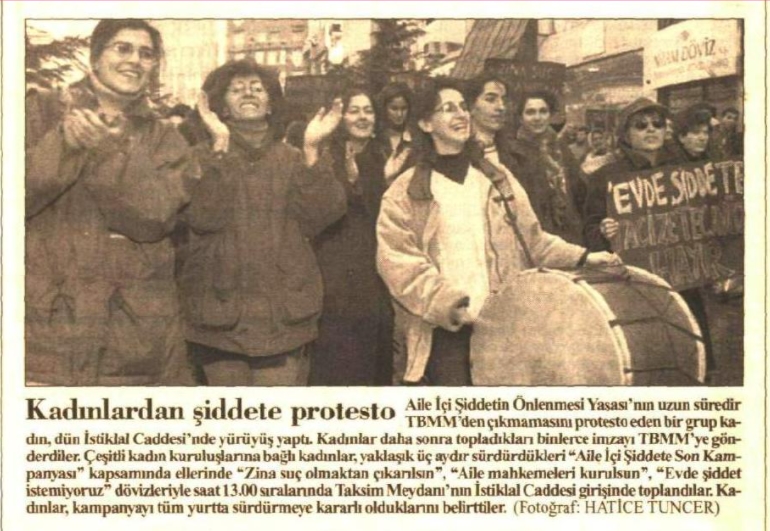 The law on the Protection of the Family No. 4230 was adopted by the Turkish Grand National Assembly on 14 January 1998. It entered into force on 17 January 1998. The law, finally, recognized violence against women as a result of the resolute struggle women waged in different cities. It was also the very first legal document that regulates what needs to be done in order to protect women in cases of violence and emphasizes the state’s obligation to prevent violence.

Mor Çatı Women’s Shelter Foundation (Purple Roof), Women’s Solidarity Foundation, and Women for Women’s Human Rights – New Ways put pressure on the Turkish Grand National Assembly to raise the topic of the law which was shelved for a long time and was not enacted. The End Domestic Violence Campaign group which was launched for the enactment of the law made a press statement on 25 October 1997 in İstanbul Bakırköy Freedom Square as its first protest. Throughout the campaign, women collected over fifty thousand signatures by setting up stands and handing out leaflets; they sent the signatures they collected to the Presidency of the Turkish Grand National Assembly, playing drums and marching from Taksim to Galatasaray Square in Istanbul. Women collected signatures for the adoption of the law not only in Istanbul but also in other cities such as Ankara, Izmir, Mersin, Samsun, Bursa, and Diyarbakır. Communicating via phone and fax, women expanded the campaign by organizing in different provinces.

During their protests, women did not merely voice their demand for the adoption of the law, they also stated their criticisms toward the law. They emphasized that the name should not be “Law on the Protection of the Family” but “Law on Prevention of Domestic Violence”. They also demanded financial and legal support as well as independent shelters for women who were subjected to violence.

The law (with the 2007 amendments) granted women the right to have the Family Court issue a restraining order against the violent individuals with whom they live under the same roof. According to the law, restraining orders could be issued by women’s direct application or through the prosecutor’s office. The duration of the restraining orders has been determined as a maximum six month period, to be renewed in case of violation. In addition to the restraining order, the law introduced other precautions that can be issued by a judge, these are: prohibition of using violence or threatening behaving towards the family members in a way to instill fear or violence; restraining the violent perpetrator from the shared house which is to be allocated to other family members and restraining the person from approaching the house or workplaces where these individuals live together or separately; prohibition of damaging the property of family members; not bothering family members using various means of communication; surrendering weapons or similar tools to law enforcement agencies, if any.

Ambiguous expressions used in determining the purpose and scope of the law caused problems in its implementation. The law’s scope was limited to cases where “one of the spouses or children or other family members living under the same roof, or a family member who is legally entitled to live separately by the court’s separation decision or who is actually separated despite being married” was exposed to violence. However, in the implementation, law enforcement officers, prosecutors and judges would frequently discuss whether a restraining order could be issued for a divorced or unmarried woman or a woman who is married not officially but under religious accords. Depending on the judge’s approach, some of these women could be denied the right to demand a restraining order. The law enforcement tried to discourage women from reporting incidents of violence and from demanding restraining orders by providing incomplete, incorrect and intimidating information to women and pressuring them. While the law stipulates that the restraining orders be swiftly issued, women were requested to provide witness or an assault report. Since the law was not disseminated sufficiently and the police or judicial institutions that women applied to did not provide women with sufficient information about the law, women could not effectively enjoy the right granted to them by the law. According to the survey conducted by Mor Çatı Women’s Shelter Foundation at the time, “only three out of 39 women who stayed in the Mor Çatı shelter were aware of the law before coming to the Mor Çatı.” However, 38 out of 39 women “had applied to the police or judicial institutions due to the violence”. [1]

Therefore, the law was frequently criticized by women’s organizations due to its codification and implementation which does not recognize women as individuals and prioritizes the family; its ambiguous provisions regarding its implementation; and its limited approach to preventing violence. Previously in the “from our history section” on Çatlak Zemin, we shared one of the campaigns, “The Law No. 4230 shall throw out male violence”, that was carried out in this context.

Taking into consideration the criticisms, following the Opuz decision issued by the European Court of Human Rights in 2009, women from feminist and women’s organizations started to work for a law that explicitly defines the state’s obligation to prevent violence, protect from violence, and punish acts of violence. Adopted on 8 March 2012, the Law to Protect Family and Prevent Violence against Women No.6284 emerged as the product of these efforts.

Law No. 6284, which we still try to protect and advocate for its implementation nowadays, expands the definition of violence; covers different types of violence; extends the protection to unmarried women; and proposes an institutional and holistic approach to combating violence. For a comparison of the two laws, see the link below.