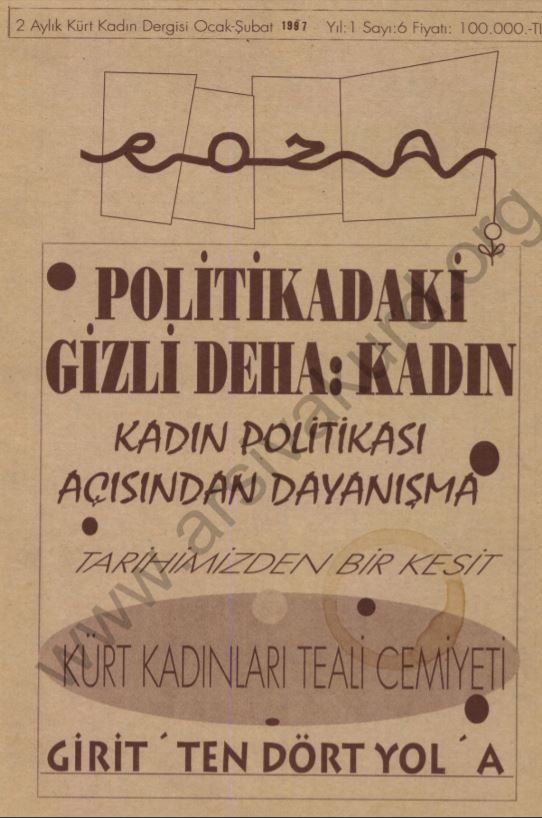 Feminist magazine Roza, which revolts against the specific and violent oppressions faced by Kurdish women, was launched in March 1996. Roza had adopted a stance that is independent both of Kurdish political parties and of Turkish women’s groups. It addressed the oppression faced by Kurdish women through the relationship between sexism and racism, without reducing one to the other. The magazine was published bi-monthly, for a total of 17 issues over four years.

The initial attempt to independently organize by women who published Roza was in June 1990 under the name of Independent Kurdish Women’s Group (Bağımsız Kürt Kadın Grubu – BKKG hereafter). The early foundations of Kurdish feminism formed in this group. After three years full of heated debates, BKKG dissolved itself in 1993. Roza inherited BKKG’s legacy: both the basic principles of the magazine and most of the women who created the magazine came from BKKG.

Stories of two Kurdish women were effective in Roza’s publishing. In May 1993, Cemile, a young Kurdish woman, tied her three children to herself, filled her pockets with rocks and drowned herself in the Euphrates River in Elazığ. The tragedy of Cemile who had been subjected to domestic violence for years was not raised as an issue by the Kurdish movement. In June of the same year a Kurdish woman named Şükran Aydın was detained and sexually assaulted by the security forces in Derik, Mardin. Unlike other women who had been subjected to sexual assault, Şükran Aydın did not remain silent and spoke about the rape in custody for the first time. Her legal struggle which reached all the way up to ECtHR lasted ten years. At the time, Kurdish women could not find any media outlets to share their views and make them heard.

Fatma Kayhan expresses her experiences during this period as follows: “Cemile and Şükran showed us, once again, how important feminism is for Kurdish women. It was obvious that we needed a Kurdish women magazine and organization through which to express ourselves. Following a few failed attempts, three years later, in 1996 we could start our own magazine, Roza. However, the foundations of an independent Kurdish women’s organization had appeared long before. In the late 1980s we had a small group where we were discussing what to do. Our primary principle was to organize by ourselves and for ourselves; we were going to be independent of Turkish women’s groups and Kurdish political parties. The oppression of Kurdish women can be explained only by tackling sexism and racism together. If we look only into the sexist division of labor determined by patriarchy, we cannot understand Kurdish women. Nor can we understand the situation of Kurdish women if we only focus on the racist hierarchy. Clearly, unlike the Turkish people, who are the oppressor nation, Kurdish women are also discriminated against because of their ethnic identity. However, Turkish women overwhelmingly ignored this fact and tried to conceal this. In opposition to this, we stood for a feminism based on differences instead of forcing all women to come together on a common denominator. On the other hand, Kurdish national movement wanted us to postpone or put aside our womanhood. We, however, opposed these two perspectives that tear us apart, see us as lacking, and ignore us and argued that our identities as Kurdish and women constitute a whole. This specific form of oppression entailed another agenda and form of struggle. To summarize, Roza aimed to be the voice of Kurdish women with a feminist perspective; although its success is debatable today. We tried to question Turkish racism and raise this issue in a political context that assumes that racism exists only in the USA or South Africa. The list of topics on our agenda which ranged from domestic violence to state violence was too long but we were very few (…) Generally speaking, the weight of political atmosphere in Turkey and in Kurdistan, legal oppressions, the feeling of loneliness emanating from being only a few people, financial costs of working independently, obstacles to dissemination exhausted the women in Roza and made it increasingly impossible to publish the magazine.”

The 17th issue of Roza was published in June 2000 and the publishers had to end its publication as of this date.

Rape on public transportation and the responsibilities of municipalities– 2: Examples...

On Feminism for the 99%: A Manifesto*

Background to the Istanbul Convention dispute in Poland / An interview...