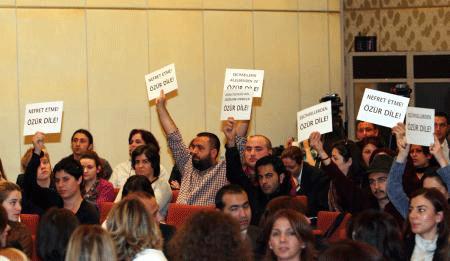 Selma Aliye Kavaf, Minister of State for Women and Family, was protested because of her words that homosexuality is an illness and that homosexuals should be treated.

Kaos GL members also attended the conference titled “Equal Opportunities and Gender Equality: Experiences of Italy and Turkey” organized by the Italian Embassy on the occasion of the visit of the Italian Minister of Equal Opportunities, Maria Rosaria Carfagna, and held at the Rixos Grand Ankara Hotel on April 15, 2010.

When the Minister of State for Women and Family Selma Aliye Kavaf’s speech began, Kaos GL members sitting in the hall raised the “Apologize to Homosexuals!”placards in their hands quietly. Rixos Hotel security guards intervened with Kaos GL members who continued their silent protests.

Anjelik Kelavgil of May 17 Association: “The only way out of...