The original novelty and the exciting aspect of feminist strikes lies in their success to synthesize the struggle against patriarchy with the struggle against capitalism in a mutually enriching way as well as to put into practice a criticism which is more multi-layered than all the previous criticisms directed against the patriarchal capitalism in which we live today. 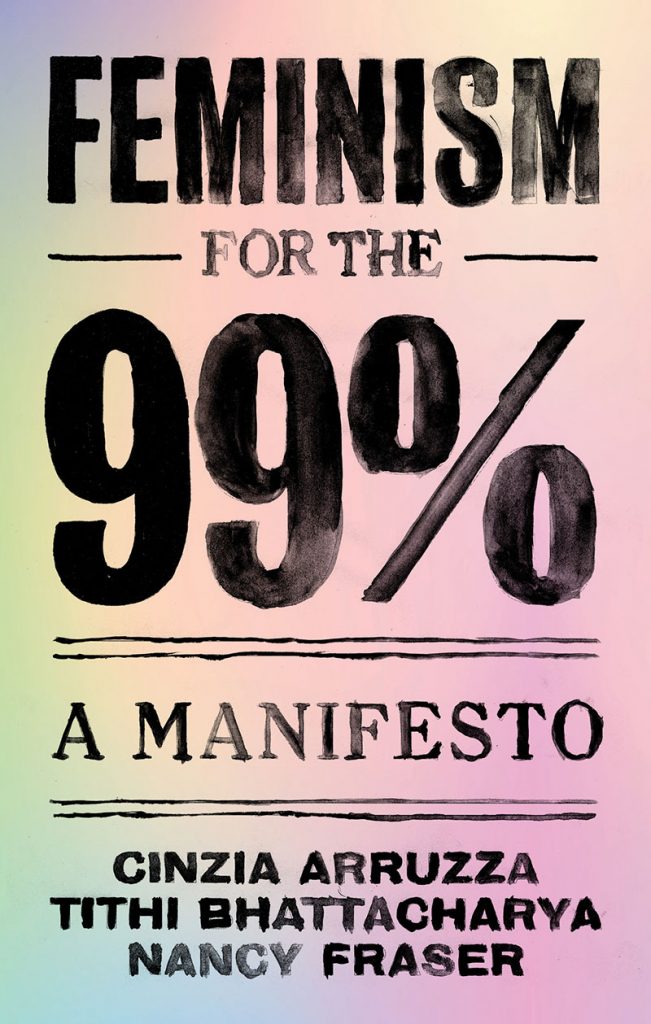 On Feminism for the 99%: A Manifesto dates back to an appeal which was signed by eight women and published in the US in February 2017. The appeal written by these eight women, amongst whom were also the writers of the Manifesto, simultaneously called women in the US for an International Women’s Strike on 8 March 2017.[1] Subsequently, the Manifesto, which was penned by three of the eight women who signed the appeal, was first published in the New Left Review in November 2018, and later, it was republished by the Verso Publishing House as a book with an Appendix in March 2019. It is possible to trace the changes in the tone of the text as the appeal transformed into a manifesto and then finally into a book with an Appendix: whereas the authors of the appeal underlined their aim of contributing to the bourgeoning new feminist wave, the authors of the Appendix to the book defined their aim as ” […] a rescue operation and a course correction-to reorient feminist struggles in a time of political confusion.”[2] This endeavor to reorient feminist struggles in turn reorients the text from a feminist one to a feminisante left/socialist one. In what follows, I will first articulate why I find so striking and exciting the feminist strikes, which have rightly galvanized these authors. Then, I will tackle some of the issues pertaining to the aforesaid Manifesto.

The distinctive feature of the strikes which began in 2017 is that perhaps they are the first mass feminist movement of such magnitude that is open to the concrete realities of the women in all their layers and richness. Women who relate to other women through varieties of networks, by way of forming bridges between theirs and other women’s experiences and exposing the interconnectedness of the singular issues they face, make headway for a critique of patriarchal capitalism in its totality and unify their singular issues. For instance, by linking the abortion bans to male violence against women and femicide, and by forming connections between the multifaceted forms of male violence and unpaid care labor, the constraining clamp of paid/unpaid labor, low-paid jobs, and precarity, they create space for each other in and through these strikes. In the meantime, whilst the participation of the migrant women in the movement with their specific issues makes the movement actively embrace anti-racism, the struggles of the Latin American indigenous women result in ecological concerns becoming feminist issues and the inclusion of the violence against LBTQ women in the agenda strengthens the stance against homophobia and transphobia. As the collaboration of capitalism and patriarchy in different areas of life is exposed, an ever-expanding range of examples as to how racism, the capital, the public, and the institutions mediate patriarchy are presented.

It is noteworthy that the inclusiveness of the strikes, which set out from concrete issues, is built within a motion which moves from the concrete to the abstract and from the specific to the general issues. This provides us with important knowledge as to how a collective feminist subject can be constructed. The strikes also show us that instead of setting out with a close-ended program or perspective forming connections between the reality of the women who come together and that of our own can lead us to more transformative and radical goals. This dynamism not only opens up further dimensions in the analysis of patriarchal capitalism, but also enhances our potential to dismantle the current social relations in which we live.

By all means, these strikes differ from one country to another; whereas in some countries a more radical feminist tone dominates the movement, in others, the arrows of criticism are turned towards the capital rather than the men. For instance, while in Spain, the positions and duties of men were tackled in terms of men’s domination and privileges, the unifying approach which I shortly mentioned above resulted in linking various forms of violence in Argentine to capitalism and the capital in the last analysis. Whereas women in Spain speak of male violence, in the texts produced by the women in Argentine “capitalist violence” can become the umbrella term to refer to all forms of violence against women. However, despite the different forms it takes, in many locations the strikes constitute the processes through which women refuse to put in emotional and material labor for men and expose different layers of their labor in paid/unpaid jobs or formal/informal employment at home, at schools, at workplaces or on the streets.

As far as I am concerned, the Manifesto with its abstract radicalism which draws on anti-imperialism, anti-racism, anti-capitalism and condemns some of the earlier examples of feminist action based on these principles runs the risk of suffocating the multiplicity and the diversity that these strikes bear. Furthermore, instead of forming bonds and connections between the concrete realities of women, it endeavors to square these realities with its own analysis of capitalism. Özlem Barın underlined an important detail in the aforementioned text of hers: “The question remains as to why in the US, unlike other countries where the calls were made through the platforms, the call for feminism for 99% was once again made via the personal signatures of a little more than 10 women despite the fact that such platforms also exist in the US…” I think what plays a significant role in this decision is the instinct on the part of these women, who openly embrace the goal of reorienting feminism, to take their anti-capitalist, anti-imperialist, etc. perspectives as the point of departure.

It is possible to provide examples to the abstract radicalism which I briefly talked about from the Manifesto.  Whereas in the appeal of 2017, the strike against the abortion ban in Poland was openly endorsed and supported, the Manifesto puts forth an approach which dismisses the demands for rights that would empower women and the gains which were achieved one step at a time as “half-measures”: it is specifically underlined that the legalization of abortion would become meaningful only in conjunction with “free, universal health care”. Shortly after the direction that the struggle against male violence should take is defined as follows: “Then, too, laws criminalizing gender violence are a cruel hoax if they turn a blind eye to the structural sexism and racism of criminal justice systems, leaving intact police brutality, mass incarceration, deportation threats, military interventions, and harassment and abuse in the workplace. Finally, legal emancipation remains an empty shell if it does not include public services, social housing, and funding to ensure that women can leave domestic and workplace violence.”[3] Yet again: “Laws criminalizing marital rape or workplace assault won’t help women with nowhere else to go, nor those with no way to get there.”[4] Indeed, the authors, in the name of rightly criticizing the general framework of liberal feminism which has a strong tradition in the US, choose to follow the path of refusing all forms of anti-discriminatory measures as well as any partial improvements. In the meantime, liberal feminism becomes the “real enemy”.

It seems like in this manifesto the goals of forming connections and bridges between women who come together to address different needs has been discarded in order to pursue a different kind of unifying understanding. This understanding moves away from linking male violence to other forms of violence, and partly leads to casting a veil over the specificity of male violence. Indeed, the authors are using gender-based violence to blur the distinction between different forms of violence to which women might be exposed and male violence; the explanation as to the exaggerated/inflated continuity between the violence of the market, capitalist corporations, the state and specific male violence is offered in terms of the structural foundations of violence which are grounded in capitalist society: “We know that gender violence under capitalism is not a disruption of the regular order of things, but a systemic condition.”[5] Intimate partner violence which we experience in every country, in every class, and ethnic and racial group “reflects the contradictory dynamics of family and personal life in capitalist society. And these in turn are based in the system’s signature division between people-making and profit-making […].”[6] In other words, gender-based violence is one amongst many other forms of capitalist violence. The male violence which has been going on since the pre-capitalist period and which has only acquired new appearances under capitalism, according to the logic of the Manifesto is explained in terms of the dynamics of capitalism. However, it is one thing to say that certain dynamics of capitalism increase the violence or for that matter capitalism profits from novel forms of surveillance over women’s bodies and completely another to argue that capitalism is the source of this violence.

This unifying perspective, in the final analysis, explains everything in terms of capitalism, be it the linking of male violence to capitalism using the adeptness of the expression “gender-based violence” or explaining why the responsibility for social reproduction is put on women’s shoulders in terms of “gender asymmetry”.[8] Yet, I think that the original novelty and the exciting aspect of feminist strikes lies in their success to synthesize the struggle against patriarchy with the struggle against capitalism in a mutually enriching way as well as to put into practice a criticism which is more multi-layered than all the previous criticisms directed against the patriarchal capitalism in which we live today. Frankly, I hope that the future direction of the international feminist strikes will not be defined by the authors of the Manifesto, but by the call to rebellion against the collaboration between capitalism and patriarchy which resonated with women during the strikes in Spain.

[1] This appeal as well as the articles of Özlem Barın and Filiz Karakuş, which I referred to while writing this text, were also published on Çatlak Zemin: “Beyond Lean-In: For a Feminism of the 99% and a Militant International Strike on March 8”; “Realizing an Impossible Strike: Women are once more going to strike on March 8” and “This is a not a general strike, it is a feminist strike: If women halt, the world halts”.

Introduction to the discussion on “Justice of disclosure, justice of women”