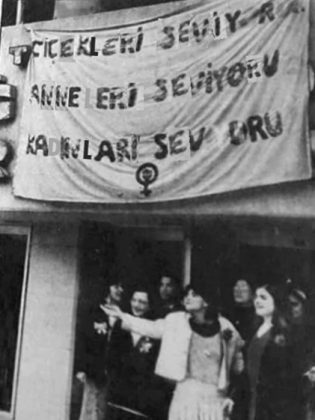 After women in Istanbul started the Campaign against Battering, feminists in Ankara decided to organize a street protest against battering. They planned to sell flowers, and pins with “Don’t beat mothers” written on them at the Gençlik Park on Mother’s Day. Pins and flowers were prepared. They also prepared a banner saying “We love flowers, we love mothers, we love women” by hand-stitching letters from pieces of fabric. They reached out to journalists one by one in order to publicize the protest. They sent press releases to newspapers. However, on May 10, due to the rainy weather, the protest did not go as planned. Then, women went to Altındağ Municipality Cultural Center. Participation was low. Feminist women unfurled the banner and attached the pins on those who passed by. Thanks to the press work of the previous day, the protest captured widespread media coverage. Nonetheless, feminists who organized the protest were not happy with the protest since it did not go as they planned, and they were not able to reach out to women.

“The symbolic significance of this protest is the emphasis on the political nature of any form of glorification of women. Why not on the traditional 8th of March but on Mother’s Day? The slogan of this protest reveals its own political nature: ‘So, you love your mother but batter your wife?’ Re-reading of the commercial market founded upon motherhood is, at the same time, a turning point at least in Ankara where women took to the streets with a feminist identity for the first time. In the midst of depoliticization in Turkey, reactions against women’s taking to the streets became evident. People who encountered a group of protesting feminist women thought that it was a sort of Mother’s Day celebration. Many people simply ignored the protest or found it funny.” [1]

Feminists in Ankara organized protests on the Mother’s Day of the coming years. Protests were held in Seymenler Park in 1988, in Kuğulu Park in 1989, and in Yüzüncüyıl Park in 1990.