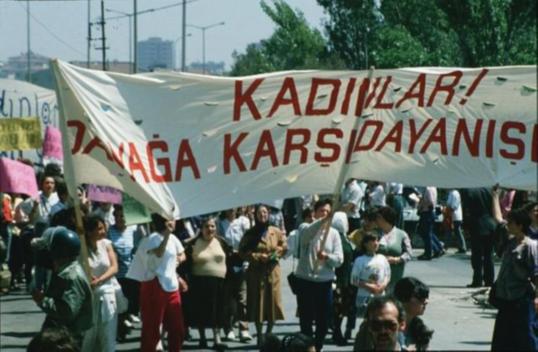 In Istanbul, “March against Battering” was held as the first permitted and mass women’s protest after the 12 September 1980 military coup d’état. The protest started at Kadıköy Pier and continued until the meeting at the Yoğurtçu Park. The march was organized by women from the Feminist and the Kaktüs journals, women who, at the time, were preparing for establishing the Women’s Association against Discrimination, and independent feminist organizations. The May 17 protest which was held against domestic violence and legitimization of battering is the first march organized and participated exclusively by women.

The reason for the march was that Mustafa Durmuş, a judge in Çankırı, overruled the case of a woman who wanted to divorce because of battering, saying “ A woman should be tamed with a whip on her back and a kid in her womb.” Women first sent telegrams protesting against this decision which exemplified the legitimization of male violence in the society, and later they filed collective petitions in the courthouses. Struggle against this decision as well as against the system that legitimizes battering grew and an idea of organizing a meeting emerged. The March against Battering which was planned for the Mother’s Day was held on March 17, one week after the Mother’s Day, due to the governorate’s hindrance. Approximately 2500 women joined the march shouting slogans “We don’t want the heaven where battering sprang”[1], “There is no legitimate battering”, and “Battering is rooted in the family”, and they called women for solidarity against battering.

The march was a turning point for the feminist movement. Following the march, a campaign was started to provide counselling to women who were subjected to violence and to open a women’s shelter. In October, a festival was organized. The book Shout, So That Everyone Hears predominantly featuring testimonies was published with the money collected during the festival.

During the summer of 1988, women created solidarity networks and they attempted to more regularly meet the legal counselling, accommodation, and financial support demands of women who were subjected to violence. In October 1988, the booklet For Shelter Now which also included the “women’s shelter” project was prepared. 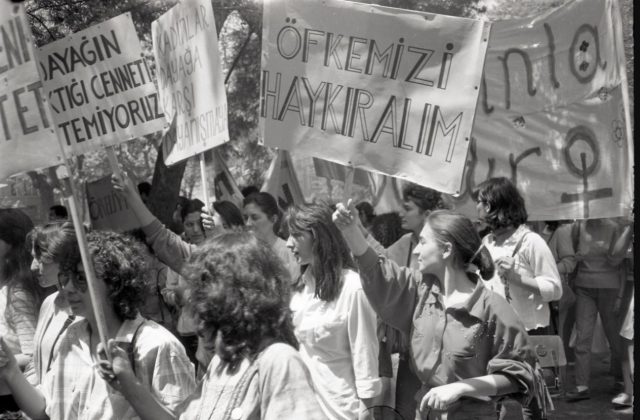 In January 1989, a telephone network was created for offering legal and practical support to women who were subjected to violence. However, in a short while, it became evident that solidarity networks would not suffice, and a shelter was of utmost necessity. Through solidarity in the country and abroad, Mor Çatı Women’s Shelter Foundation was established in order to spread the struggle against male violence in the family and to maintain solidarity with women who were subjected to violence.

In February 1987, Mustafa Durmuş, a judge in Çankırı, rejected the divorce request of a woman who was subjected to violence. While giving the justification, he made an introduction “Women’s having three children and is pregnant to the fourth… although his husband is bad-tempered, she is still having sexual intercourse with the husband”, and he continued “quarrels every now and then are the spice of the marriage… There is an Anatolian saying that captures my attention, they say ‘a wife should be tamed with a whip on her back and a kid in her womb.” We, who would later be the constituents of the “Campaign against Battering” (Women from Feminist and Kaktüs journals, Women’s Association against Discrimination and independent women), read on the newspapers that a group of lawyer women in Eskişehir protested the judgement. Later we found the judgement itself in the interesting judgements section of the Ankara Bar Association’s journal and decided to file a case against the judge. Petitions to file a lawsuit for non-pecuniary damage of 1 Turkish Lira in our hands, we went to İstanbul Sultanahmet Courthouse. But our case was rejected on the grounds that “we were not party to the case”. After this incident, to organize in the form of a campaign; the concepts such as “politicizing the private” or “not legal but legitimate” which we had just started to discuss and use in relation to violence as well as questioning this legitimacy as well as “family inviolability” became very important points of transformation and discussion for all of us. At the end of long, heated meetings, we decided to organize a march to protest battering. Serious effects of the 12 September 1980 coup d’état and the fact that no march had been organized until that day…  Also, the fact that it was going to be a march organized by women to raise our own demands…  Although these were worrisome, excitement and struggle outweighed, and we decided to march even if the turnout would be low. Ayşe Düzkan, Şirin Tekeli, Özden Dilber, Zehra Başer were speakers at the march and we were also able to make sure that a trans friend of ours, whose name I unfortunately cannot recall right now, would make an “informal” speech! The song “Women Exist” that I composed with the excitement of those days and the rush of march meetings was, I suppose, surprising to everyone, including myself…  İdil’s (Nalbantoğlu) song, “We harbor the rebellion of unjust centuries”, is a reminder of those days… When we gathered in Kadıköy Yoğurtçu Park on 17 May 1987, participation was much higher than we had ever hoped for. May 17 was the first march organized and attended exclusively by women against domestic violence and legitimization of battering.”

[1] This is a slogan countering an often used idiom in Turkish: “Heaven is where battering sprang.” (Editor’s note)

27 May 1995: Saturday People/Mothers are at the Galatasaray Square!