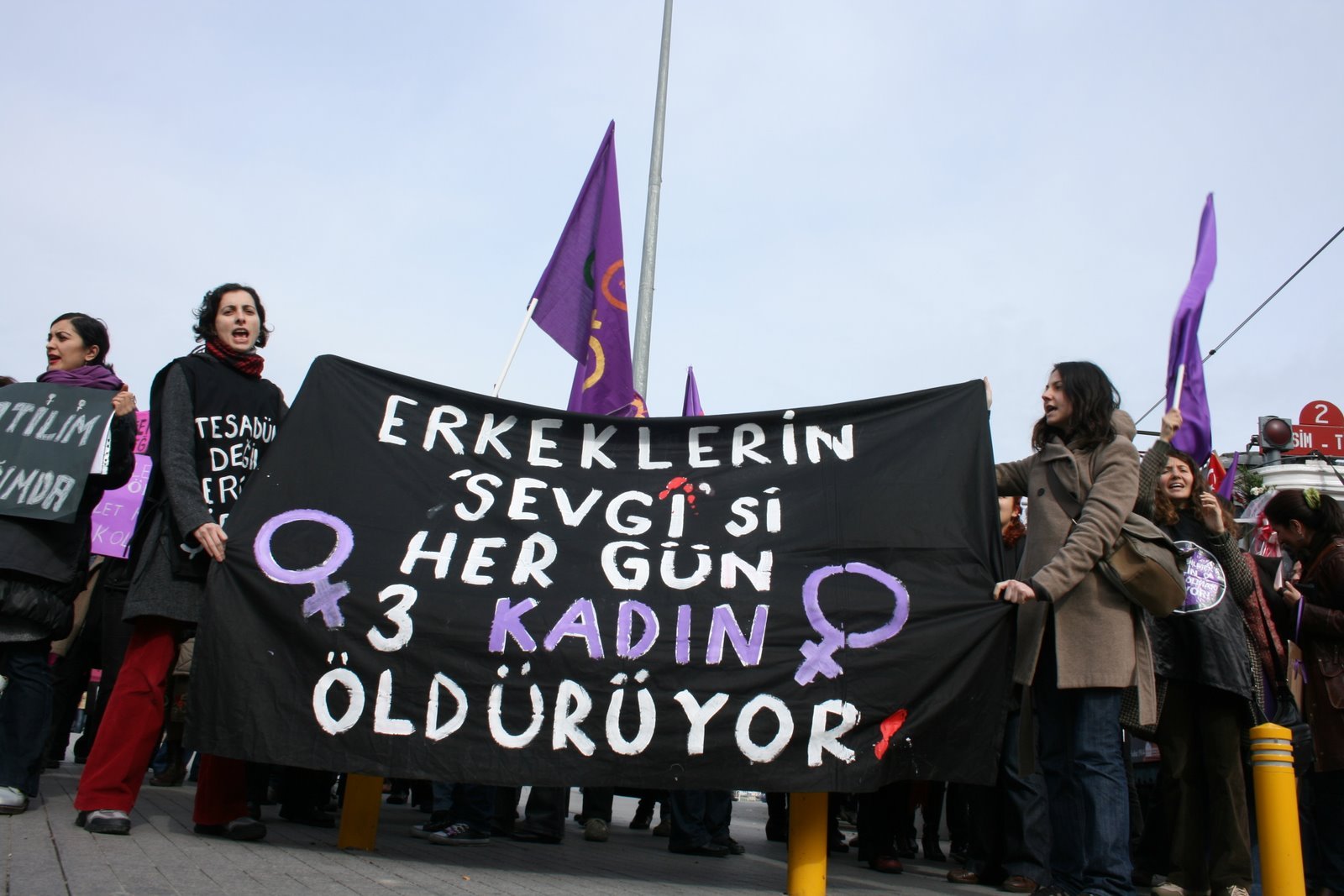 In November 2009, Minister of Justice Ergin announced the statistics pertaining to violence against women and the number of women killed from 2002 to June 2009: he stated that 953 women were killed in the first seven months of 2009 only. And hence the numbers demonstrated that the ratio of femicides has increased by 1400% between 2002 and 2009.

Istanbul Feminist Collective had decided to organize a protest and raise the issue of femicide on Valentine’s Day, 14th of February 2010.

The protest on February 14, 2010 was the first protest that women groups organized on Valentine’s Day. Before and after the protest, in their meetings, feminists began to voice the idea of organizing a campaign against femicide.

“Today is the 14th of February, Valentine’s Day. Today, all around the world, men will tell their lovers how much they love them with red roses and many other gifts in their hands.

Today is the 14th of February, Valentine’s Day. Today, all around the world, men will exaggeratedly court women and tell them ‘Honey, I am glad that you are in my life, I cannot do without you’. They will say to women ‘I love you so much so that I can do anything for this love’.

Today is the 14th of February, Valentine’s Day. Take a look at the third page of the newspapers. You will see. Today, at least three of the women who may or may not be given flowers, will be killed because of men’s ‘love’.

Men are the killers of women.

Do you know that every day at least three women are killed by men who love them?

In Turkey, every year, over 1000 women are killed by their lovers or husbands. Justifications such as a message sent to the phone, chatting with another man, asking for a divorce, being divorced, ending a love relationship, skirt length, being flirtatious, the saltiness of a meal or not opening the door immediately are enough for men to kill women. The same justifications are recognized by misogynist laws, and these laws offer a penalty reduction for unjust provocation.

The men who batter, abuse, rape, and kill women are not, as it is commonly believed, some strangers, but are men who we live together with and say that they love us.

We, feminists, state that ‘femicide is political’. This is because men lock women into houses, threaten them, batter them, isolate them in order  to control and dominate them, and when they fail to get what they want with these oppressive acts, they kill women.

The judiciary, which takes decisions in favor of men when a man kills a woman, does not implement laws and decisions that will prevent the femicide of women by offering penalty reduction for unjust provocation.

But we, feminists, see the state’s endless tolerance and the support of law for the men who kill women, and we say this once again: women are not alone. We, feminists, will continue our ongoing struggle against the trivialization of women’s lives and the application of penalty reduction for unjust provocation in cases when men kill women.

We know that women may be exposed to attacks and assaults by men anytime anywhere. We will not make peace with your violence. We will not remain silent at the face of male violence; we will raise our voices together. We will strengthen our women’s solidarity which clears the path for our emancipation from male violence.

Shout so that everyone hears, and male violence ends!”