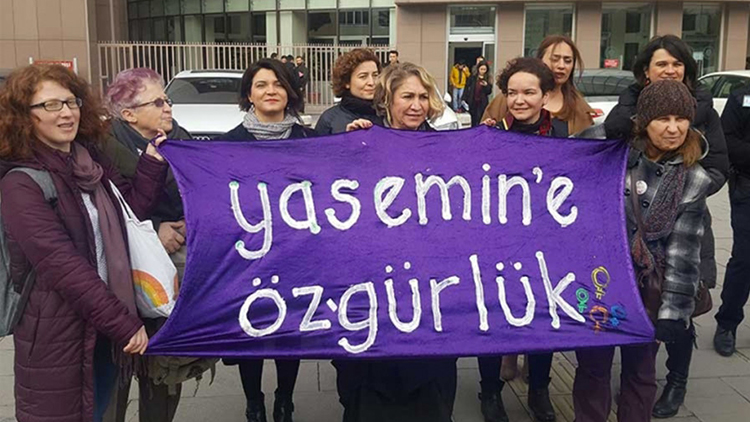 On 10 July 2014, in an attempt to protect herself and her child, Yasemin killed her ex-husband Özkan Kaymaklı, who systematically subjected her to abuse. While her ex-husband was trying to strangle Yasemin with a belt and clutched her child’s throat with his elbow, Yasemin desperately swung the knife on the table. Yasemin had filed numerous complaints to the police, asked for help from her family, and stayed in a women’s shelter saying that her husband was threatening her with death. Nonetheless, she had to kill her ex-husband to survive.

The first hearing of Yasemin’s case when Yasemin was facing 18 to 24 years of imprisonment was held on 16 December 2014. Throughout the case, feminists organized protests for Yasemin, and feminist lawyers and women followed the case.

Yasemin was released on 7 July 2017 after the panel of judges reached the decision that “no punishment is necessary for the crime was committed under fear and agitation”. Following the decision, feminist lawyers applied to the Court of Appeal for Yasemin’s acquittal. On the other hand, Özkan Kaymaklı’s family appealed to the court for Yasemin to be penalized.

During the appeal hearing at the 1st Criminal Chamber of the Istanbul Regional Court of Justice on April 9 (Monday) at 13.30, a motion was made for Yasemin’s acquittal.

Below is the chronology of the 14 hearings of Yasemin’s case in which she was tried for imprisonment from 18 to 24 years and released in the last hearing:

Yasemin Çakal’s first hearing was held on 10 December 2014. Yasemin Çakal’s sister said that her elder sister had been subjected to violence throughout her marriage, been threatened with death, wanted to get divorce but was afraid of getting killed by her ex-husband. Yasemin’s sister Eda said that her sister had a miscarriage because of the physical violence she was exposed to and faced a risk of another miscarriage for another child.

Istanbul Feminist Collective (IFC) made a call for Yasemin’s second hearing on January 27. IFC said that “It is not a crime; it is a self-defense against male violence” and demanded that Yasemin be released.

Members of Istanbul Feminist Collective attended Yasemin’s second hearing. Yasemin took the floor for defense and told the violence she was subjected to throughout her marriage.

Announcing its interim decision in the second hearing, the panel of judges decided that the defendant would remain in custody and adjourned the hearing to March 19.

On 17 March 2015, Istanbul Feminist Collective made a call to women for Yasemin’s hearing which will be held on March 19. IFC’s monthly report “Women Are Owning Their Lives” stated that feminists “strive for making women’s struggle visible. The act of self-defense should go unpunished in the legal regulations.”

In the third hearing, Yasemin’s colleague Özlem Haymana was called to testify as a witness. Özlem Haymana stated that Yasemin was subjected to violence all the time and said “Yasemin would tell that Özkan would come home drunk and get violent towards her. One day, when Özkan beat Yasemin and locked her home, Yasemin asked me to call the police.”

In the hearing Yasemin’s lawyer Duygu Eroğlu expressed that the court disregarded the violence Yasemin was exposed to. Stating that Yasemin did not undergo a medical examination, Lawyer Meriç Eyüboğlu requested a report from the Forensics Institute.

Meltem Yılmaz, the lawyer of Özkan Kaymaklı, claimed that Yasemin was violent to her husband and defended male violence saying that her client was a man after all, and that he reacted to the violence against himself by his wife.

The panel of judges ruled for the continuation of Yasemin’s detention and adjourned the hearing to 13 May 2015 requesting that missing documents be completed.

Yasemin’s family and Istanbul Feminist Collective members attended the hearing held on May 13. Some of the women who came to the court upon the IFC’s call were not allowed in the court without any justification.

The panel of judges overruled the defense statements and ruled for the continuation of detention for Yasemin. The court was adjourned to June 24.

Yasemin’s relatives and IFC members attended the hearing when the court issued permission for forensic reports of “identification of violence” and “psychiatric examination”. “Our motion for forensic report to document the physical violence, torture and the ensuing trauma that Yasemin was exposed to throughout her marriage and during her pregnancy was sustained,” said Perihan Meşeli after the hearing.

The court was adjourned to September 16.

The forensics report was not submitted. The plaintiff’s lawyer argued that Özkan Kaymaklı and Yasemin had drunk alcohol three days before the incident and requested for expert opinion. Feminist lawyers, in response, stated that Yasemin was subjected to violence all the time and she resorted to self-defense and requested for her release.

The court adjourned the hearing to 1 December 2015 in order to evaluate the expert opinion requested by the plaintiff’s lawyer as well as “violence identification” and “psychiatric examination” reports.

Istanbul Feminist Collective handed out flyers in Taksim on November 28 for the hearing which will be held on December 1.

The forensics report was not delivered at the seventh hearing. The court adjourned the hearing to 7 February 2016.

Yasemin’s mother said, “Yasemin was constantly exposed to violence. She was beaten even while she was pregnant. She has a stab wound, a rib fracture, and lots of bruises all over her body. We forced her to marry. I want to make myself heard by other mothers: Protect your children, do not listen to what others say, do not do what I did.”

The Emergency Measures Coalition Against Femicide held a protest in Kadıköy on January 16. Approximately 200 feminists attended the protest and they changed the names of the street into those of women who “defend their lives”, namely, into Yasemin Çakal, Çilem Doğan, Nermin Uzunyurt, Emine Yıldırım, Gülfidan Kuşoğlu, Bedriye Altın, and Çiğdem Uyusun. Besides, a social media campaign was organized with the hashtags #KadınlarHayatlarınıSavunuyor (Women Defend Their Lives) and #HayatımızıSavunuyoruz (We Defend Our Lives).

The forensic report was not delivered in the eighth hearing either. The judge asked Yasemin if she had psychological treatment before the incident. Yasemin replied “I was subjected to violence. I was not even allowed to go out.” The other party claimed that Yasemin locked the door after the incident and that she attempted to kill Özkan Kaymaklı and her child. Yasemin responded “I gave the key to the night watchman and told him to call an ambulance. I was shocked. I never attempted to hurt my child.”

Stating that the incident took place as a result of self-defense, feminist lawyers reiterated their motion for release pending trial.

The court adjourned the hearing to 1 June 2016 for the evaluation of the report from the Forensics Institute.

In March, the book titled Kirpiğiniz Yere Düşmesin [Wish You Come to No Harm] was published. Published by Güldünya Publications, the book featured Istanbul Feminist Collective’s monthly reports, articles about the reports and interviews with women covered in the book as well as told the stories of “women who owned their lives”.

Below is the message Yasemin sent to women on the 8th of March:

“Today, I would like to be with you and cry out against male violence as loudly as I can. I couldn’t… I know that on another 8th of March, we will take the streets together. I embrace you all. We are not murderers. Now, I know that. We didn’t have any other option. I didn’t have any other option, neither did Nevin… Nor Çilem… Nor the others… In the beginning, believing that I was a murderer I was feeling guilty. But now, I know this is not the case. What else could I do? I had to kill in order not to be killed. He was always violent, he always treated me badly. Back then, I was alone and afraid, I was scared of everything. I am not afraid anymore because I have women around me. I greet all the women. Long live women’s solidarity, long live our feminist struggle.”

The report from the Forensics Institute was not delivered in this hearing. Feminist lawyers stated that Yasemin was having problems because she’s got a breast tumor and she was not receiving the required medical attention despite all the petitions. The court adjourned the hearing to September 8 for the completion of awaited documents.

Istanbul Feminist Collective’s application to be listed in Yasemin’s prison visitors list was rejected on the ground that 60-day application period had passed.

The forensics report which was requested on June 24 was not delivered in the tenth hearing. Feminist lawyers presented the case of Çilem who killed her ex-husband as an act of self-defense as a precedence and demanded that Yasemin be released.

The panel of judges adjourned the hearing to December 7 for the completion of awaited documents. 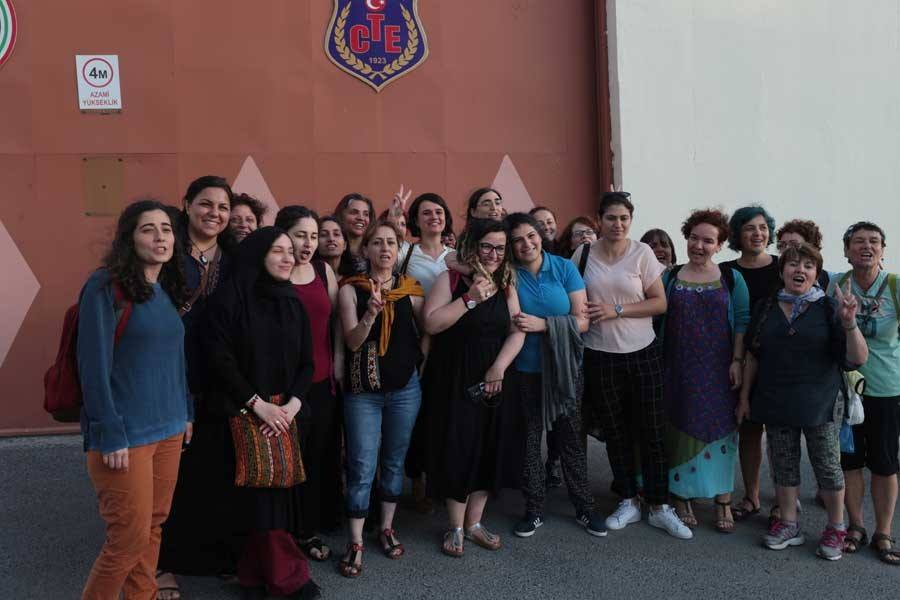 The long-awaited forensics report requested in June was finally submitted in November. Since Yasemin was not feeling well and could not defend, feminist lawyers requested for an extension for defense before the prosecutor’s opinion. The forensics report was one-page long and inadequate. The report did not present any direct link between the violence that Yasemin was exposed to during her marriage and the murder of her ex-husband. Yasemin’s lawyer demanded a report from the Istanbul University Institute of Forensic Sciences however the request was overruled. Feminists mobilized to request an alternative report.

The motion for “requesting report from medical faculties specialized in trauma and sexual violence” was accepted after two years of reiteration. This motion was important because the link between Yasemin’s act of murder and physical and psychological trauma she went through in her marriage would be scientifically examined. That is, there would be another evidence to prove that Yasemin committed that act because she couldn’t endure it anymore.

Yasemin’s written statement was read in the closed hearing. As a result of the resolute requests of feminist lawyers, in the previous hearing the motion for “obtaining report from medical faculties specialized in trauma and sexual violence” had been accepted. A full report by a public hospital could not be submitted on time for this hearing. However, it is anticipated that the report will be delivered by the hearing to be held on May 24.

The violence Yasemin was subjected to by her ex-husband was proved in a 33-page forensics report. Notwithstanding the report, the prosecutor’s opinion sought penalty of “murder of spouse under unjust provocation”. Feminist lawyers asserted that the report by the Institute of Forensic Sciences established that Yasemin had been subjected to sexual abuse and physical violence and demanded her release saying that she was going through “battered woman syndrome”. The court was adjourned to 4 July 2017.

In the final hearing, the court recognized that “she committed the act as a result of transgression caused by agitation, fear, and panic that can be excused in cases of self-defense” and ruled that no punishment is necessary. As a result, Yasemin was released. Feminist lawyers resorted to the Court of Appeal stating that although she was not given any penalty, Yasemin Çakal should have been acquitted. The family of the deceased husband also resorted to the Court of Appeal demanding that Yasemin be given a penalty.

In the appeal hearing held in Istanbul Regional Court of Justice 1st Penal Chamber, the court overturned the previous ruling and sentenced Yasemin who killed her husband who subjected her to systematic violence to 15 years of imprisonment.

The appeal process in the Court of Cassation continues.