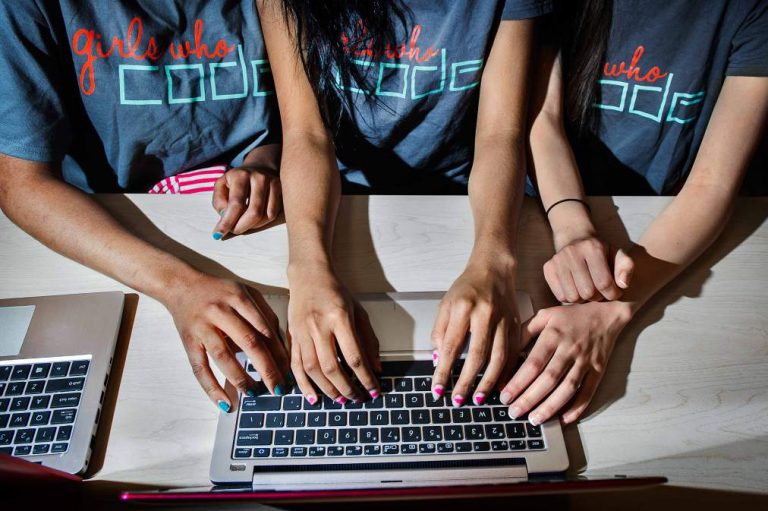 According to a research published in 1999[1] there is an extremely logical explanation as to why women cannot be engineers: simply because they cannot. Their brains are utterly different from those of men; women are created for the details. They are good at verbal communication. And men’s brains are, so to speak, geared with three-dimensional thinking, analytical skills and consistency. So, if you cannot fix your car or if you cannot write a code, don’t be sad. This is not about you; it is about being a woman.

Women cannot write codes. They cannot because they menstruate, and their hormones mess up their intelligence. Women only use the right hemisphere of their brains. They can be teachers, they can be lawyers, they can climb the ladder of success in the public relations department. However, sitting in front of a computer screen for hours without saying a single word would destroy their psychology. Women’s long nails constitute an obstacle before typing fast. On top of it all, women have breasts which block their vision. Most of us do not pay heed to these kinds of statements which are laden with masculinity in every word. However, sexism does not always come in the form of a hostile attitude. We also face hidden sexism in words which are ostensibly uttered to compliment or motivate us. I once told a friend who is a software engineer that I want to develop mobile technologies and asked his opinion on this matter. He said that he trusts me, and that he is pretty sure I would make my way pretty quickly. When I asked him about how he came to this conclusion, he replied by saying “Simply because your brain works like those of men”. In other words, if a woman, despite all her womanness, can still write codes, there is only one explanation for it: she has a man’s brain. Leaving aside all these sexist ideas –and also on account of these ideas– the number of women who write codes gradually decreases. And if we cannot turn this state of affairs around, our struggle for the elimination of sexism can get tougher.

The number of female students in universities is steadily increasing across social, positive or linguistic sciences. Before 1970, the ratio of women in medical schools was less than 5%. Today, it is over 45%. We witness a similar situation in law or physics departments. However, the number of women studying computer science is gradually decreasing. In the 1970s, the number of women in computer-related departments was three times higher than those in medicine – even though the prospect of finding a job in computer related sectors was lower. In the 1980s, this ratio rose to 35%. In the 2010s, it was only 18%. That is, it amounts to almost a third of the women who study medicine.[2] According to the 2020 data of Council of Higher Education, the 50.25% of the students who enter the top ten medical universities (which accept highest scores) in Turkey are women (women: 399, men: 395). The proportion of women entering the top ten computer engineering departments is 18% (women: 83, men: 377).[3] This means that the current state of affairs has nothing to do with women’s academic success. Women, as it is the case with any other engineering department, are becoming more and more reluctant in enrolling in computer science departments.  So, why does the number in the departments of computer, software or systems engineering departments constantly decrease? Many theories circulate around to explain this phenomenon. One of these theories refers to the constant increase in wages and income in this sector. According to the research, whereas men prefer high-paying jobs such as engineering, women are forced to opt for lower income jobs in sectors such as journalism, care sector and education. (Although this is a topic for a completely different piece, the results of a comprehensive study for those who are interested is provided here.[4]) It is accurate to say that men are more inclined towards high-paying jobs, and when the effects of patriarchy are added, these sectors become almost impossible for women. Another theory, as you might have already guessed, speculates that this phenomenon is related to the roles attributed to women and men and the types of toys we played as children. It is believed that playing with robots or remote-controlled cars facilitates men’s orientation towards mechanical jobs. However, this theory does not explain the increase in the number of women software engineers in the 1980s. The opinion that women are less successful than men in matters that involve mechanical or analytical skills (driving a car or flying a plane, fixing electrical or electronic devices, using computers, etc.) is very pervasive. A research done by GitHub reveals that this opinion is related to sexism.[5] The results of a research conducted by a group of students in GitHub, the world’s biggest open-source software development platform with 12 million members, revealed that women write codes better. Within the scope of the research, 3 million codes were examined, and it was revealed that 78.6% of the codes sent by women approved, while 74.6% of the codes sent by men were approved. But the research has demonstrated even more important facts. Women’s codes get more approval and appreciation, unless they clearly state their gender in their profile. The codes written by women whose gender is stated publicly in their profiles are less approved.

Let’s get back to why women do not prefer engineering departments. Flexible working hours or mandatory continuous professional development are counted among some of the reasons. Since childcare, household requirements and cleaning are imposed on women, working conditions can be challenging for them. Besides, because of these “sacred duties”, girls are guided towards professions that are deemed “comfortable”: such as nursing, teaching, and public relations. Additionally, for women who prefer computer science, a surprise awaits them in their workplaces: brogrammers. Brogrammer, combination of “bro” and “programmer”, is a term used to define the masculine stereotype in computer sciences. Although it is somehow used in a pejorative fashion, it is usually embraced by most of the engineers. Brogramming is not a trend against women programmers. However, that is exactly the effect it produces. In addition to the male-dominated structure, the way girls are guided in choosing a profession, working conditions, and brogramming which can be counted amongst the reasons for the decrease in the number of women working in engineering departments, the employment rate of women as engineers is also very low. A study shows that 40% of women who graduated from engineering departments either quit the sector or prefer working in other fields for reasons such as sexism, low wages, working conditions, and obligation to travel frequently.[6] As the decrease in women’s role in technology production became a crisis with the increase in demand in this field, in recent years, technology companies have begun to make and adopt new policies to effect gender equality. However, the research conducted is absolutely inadequate. And we continue to pay the price of technology production under men’s control with increasing sexism. If the number of women keeps on decreasing or no meaningful increase takes place, we can face more serious problems in the future. The biggest threat that is awaiting us is the sexism of the artificial intelligences that are developed. Nonetheless, almost no one speaks of the threat of a sexist AI. We can for sure add racism, homophobia, transphobia, and speciesism next of sexism.

Startups like the Girls Who Code or Women Who Code are working to introduce more girls and women to coding all around the world. In the absence of visible role models’ girls have less contact with the coding world. We can change this situation by increasing our areas of contact. Raising awareness on this issue can speed up the fight against sexism in this area, inspire many women, and change girls’ lives.

What does crying tell us?