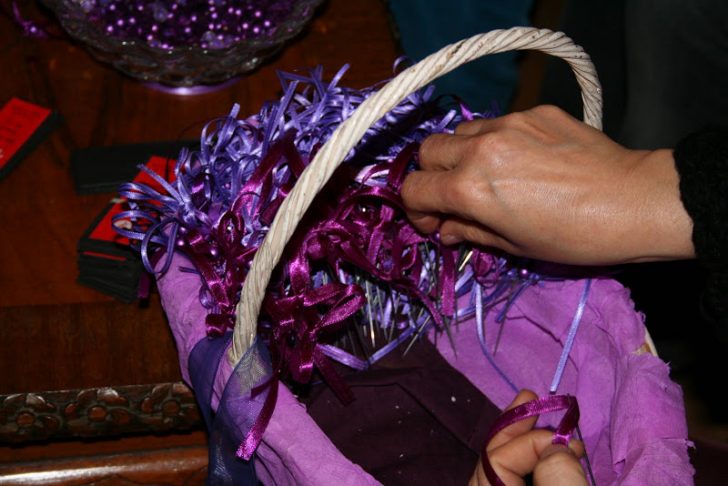 As they handed out the needles, women used the text from “Our bodies, No to Sexual Abuse” campaign, organized in 1989. As a matter of fact, the Purple Needle came into being as the symbol of this campaign. Placards saying, “Not misdemeanor, sexual harassment”, “Long live women’s solidarity”, and “Don’t be ashamed, shout and prick the needle” were carried during the demonstration.

The feminists took to the streets on 31 December 2008 because on the previous New Year’s Eve hundreds of women were sexually harassed by men on cameras. Feminists wanted to draw attention to sexual harassment incidents that take place on New Year’s Eve. Although the perpetrators, who committed a crime which is clearly defined in the Article 102 of the criminal code and is penalized with at the least four years of punishment, before the eyes of everyone and the cameras, were taken into custody, they were later released with an administrative fine of 57TL for misdemeanor on the grounds that that sexual assault is treated as a crime only if there is a complaint and that there were no such complaints filed by the women.

Feminists who want to call out and put under spotlight the “New Year’s Eve Sexual Harassments” in Taksim, which have become a tradition now, as well as the everyday cases of sexual abuse, handed out purple needles every Friday in Mis Sokak for a period of eight weeks (4 January – 8 March 2008) between 8-10 PM.

With “Once Again Purple Needle!”, feminists opposed the ways in which the incidents of sexual harassment and abuse in Taksim was tackled by many segments of the society as misdemeanor acts of a bunch of drunkard louts and boors. Feminists also raised their voices against the servicing of this event as a shame of Turkey. As they handed out needles in Taksim, they stated that these forms of harassment and assault are not coincidental and argued that women’s presence on the streets at night, the clothes they wear, their boisterous laughter, and indeed, the fact of being a woman, constitute the sufficient conditions for male violence.

The Crisis of Care/Social Reproduction and Beyond