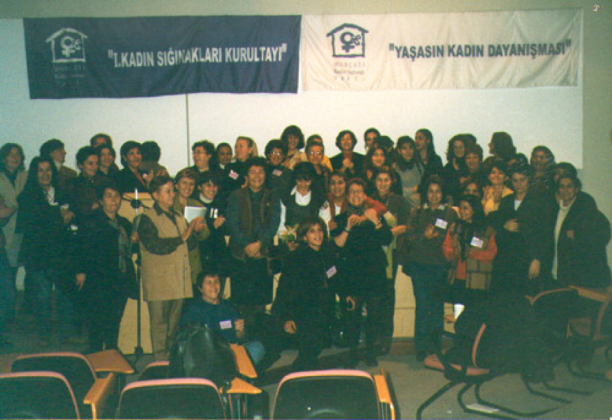 Mor Çatı Women’s Shelter Foundation (Purple Roof), founded in May 1990, opened its first women’s shelter in 1995. In the same period, “independent discussion group” in Ankara came up with a project to open a counseling center and a shelter. The independent discussion group, later named as Women from Ankara, founded Altındağ Women’s Counseling Center with Altındağ Municipality in 1991. In 1992, it opened its first shelter with the support of the municipality and founded Foundation for Women’s Solidarity. Women’s struggle for opening shelters resonated in central and local administrations. Women’s guesthouses affiliated to the Social Services and Child Protection Agency (SHÇEK) and women’s shelters affiliated to municipalities were opened in different cities. By 1998, women opened and endeavored to open shelters, counseling centers and violence hotlines in many cities from Diyarbakır to Mersin, from Antalya to İzmir, from Bursa to Edirne and they started organizing against violence.

The fact that all these women started to share information and experience among themselves and with Mor Çatı indicated that it was time to come together in an assembly. What could be done to make shelters and counselling centers more widespread? After Hülya Gülbahar came up with the idea of “organizing a women’s shelter assembly”, this subject, which was already on the agenda of Mor Çatı Collective, became a topic for discussion. The immediate action was to consult with women’s groups working on the subject. Since all feedbacks were positive, Mor Çatı Collective drafted a preparation program. After the program took its final shape following extensive discussions, Mor Çatı Collective made a call for assembly. Of course, in this process, resources were sought and found for organizing more comprehensively. Also, the basic principles of the congress were established. These principles were reaffirmed during the assembly.

These principles were as follows:

The First Assembly of Women’s Shelters and Solidarity Centers was held in Istanbul Technical University  Maçka Conference Hall on 21-22 November 1998 with the participation of over one hundred women from different cities of Turkey and Turkish Republic of Northern Cyprus (TRNC). The State Minister Işılay Saygın, ANAP (Motherland Party) deputy Lale Aytaman and CHP (Republican People’s Party) Group Deputy Chairperson Oya Araslı, who were invited to the public section of the assembly, could not participate but sent messages wishing success to the assembly.

Representatives from women’s groups and municipalities that have opened or about to open women’s shelters and women’s counseling centers, women’s shelters operating under SHÇEK (Social Services and Child Protection Agency), the General Directorate on the Status and Problems of Women, and from independent women’s groups attended the assembly. The concluding declaration widely covered the steps to be taken as well as financial and legal regulations required to eliminate male violence against women. Moreover, the concluding declaration demanded a women’s shelter and women’s counselling center for each district and listed necessary regulations to ensure the widespread dissemination and correct implementation of the Law No. 4230 which had just entered into force.

All documents pertaining to the First Assembly of Women’s Shelters and Solidarity Centers, along with the documents of the Second Assembly, were published in a book.

The Assembly of Women’s Shelters and Solidarity Centers continues to come together each year in a different city with the participation of an increasing number of women’s groups. Along with the main assembly, each year an interim assembly is organized in order both to respond to the needs of the main assembly and to strengthen the organization of and prepare for the main assembly. Based on the needs and demands in the following years, the assembly improved its principles that it had determined at the beginning. While listing the assembly principles, the assembly emphasized that it “adopts an approach that does not attempt to cover up differences amongst women in terms of class, ethnicity, religion, sexuality, etc. and allows for these matters to be discussed; distances itself from direct and implied discrimination; and stays away from nationalistic and militarist discourses and actions”.

All information about the assembly is collected on the website “A World without Shelters” – siginaksizbirdunya.org.