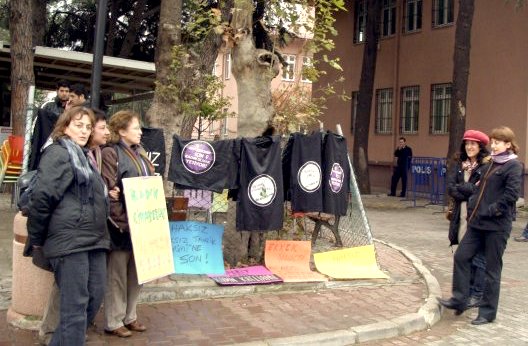 Satı Korkmak was smothered with a television cable by his husband Hasan Korkmak on 14th of February 2009.

Feminists were involved in Satı’s case when her family applied to Mor Çatı (Purple Roof Shelter). Hasan Korkmak stated that he killed Satı on the grounds that “she was in a ‘relationship’ with the son of the brother-in-law who lived in the same building” and claiming that she cheated on him.

During the first hearing in the 2nd High Criminal Court of Kartal, the feminists encountered a different scene. All the members of Satı’s family refused that Satı was cheating on her husband. Hasan Korkmak’s family was either going to claim that Satı was cheating on her husband and that Hasan Korkmak committed murder under “unjust provocation” or say that Satı was not cheating on her husband in order not to disrupt the “unity” of the family members who lived in the same apartment. Undoubtedly, whether Satı had a relationship should not be a subject of this case and should not be considered as a reason for a reduced sentence. However, since the current law says otherwise, there was a possibility of a reduction in the sentence if the family members had testified in this direction. Nonetheless, Hasan’s relatives, in their testimonies as witnesses, almost attempted to prove that there was no case of cheating. Feminist lawyers argued that the allegation of “cheating” should not lead to any reduction in sentences for femicides. In the second hearing of the case, the court decided to sentence Hasan Korkmak to aggravated life imprisonment.

Mor Çatı lawyers got involved in the case of Satı Korkmak case on behalf of the family of Satı. When the panel of judges did not let anyone into the courtroom except for the lawyers and families, feminists waited for the decision of the hearing in front of the courthouse. Following both hearings, a press release was read.

Satı Korkmak, Canan Akbulut, Zübeyde Yıldız, Azize Şimşek, and Ferfuri Akbaş have never met, but it was their husbands or ex-husbands who killed them that brought their names next to each other. The different names of all these women who never met, and of hundreds and thousands of others were written in the records under “killer masculinity”, the origin of all these killings. All the murderers had “manly” excuses.

Wanting to divorce, taking care of one’s children, wanting your share of the property acquired throughout the marriage, trying to escape from the violent husband, trying to establish a new life! On top of all these, endeavoring to achieve all this as a woman was more than enough to be killed. The trials of the murderers who were caught have begun; the investigation files are being prepared. And the evidence which will “legitimize” their killing of women is gradually taking its place in the case files. In line with the judges’ discretion, some of the justifications they offer will be found “legitimate” and the penalty for killing these women will amount to 5 to 10 years in prison. This mind, this mentality has been distributing “justice” for centuries. The state, officials, and those responsible are not adequate to ensure the safety of women, and they keep ignoring the lives taken from women. Given all this, the decision of ECtHr on Turkey is deemed “unjust” by the highest officials of the state.

We are asking everyone: What constitutes the real injustice here?

Today, as women’s organizations, we petitioned for involvement to reiterate once again the fact that we are a party in the case of Satı Korkmak. We, the feminists, are not only a party in the case of Satı but also in the cases of all women who were killed by their husbands, ex-husbands, lovers, brothers, uncles, fathers, and families. The husband, who feloniously killed Satı, will probably repeat what is state in the indictment and say throughout the trial that he was being “cheated” and that he committed this murder in order to cleanse his honor in a state of sadness, grief, and blind rage. In fact, he will keep repeating something that we already know: “The male dominated order gives the man the social right to keep the woman’s body under control!” In short, to all of us, he will say, “It was my honor”, “I cleansed my honor”! We will see together whether this “manly” right to which the murdered husband finds himself entitled, will be upheld by the punishment given by the court.

Although we cannot bring back beloved Sevim Zarif, Ayşe Yılbaş, Pippa Bacca, we are a party to this case to show once again that justice can work in favor of women and that women’s lives are not cheap!

Since we are against the male-dominated system that puts the right of disposition of women’s bodies and lives to the use of men in the name of honor, we reiterate once again that we are party to this case!

As women’s organizations and feminists, we do not accept the acquittal, pardoning, or rewarding of this understanding which favors men and costs women their lives. In cases where women are killed, the unjust provocation reductions, which are based on the grounds that the rules of the male dominated system and the interests of men are violated, must come to an end.

A tribute to Anne Sylvestre

Rape on public transportation and the responsibilities of municipalities– 2: Examples...