Somut (Concrete) magazine is a periodical publication of the Writers’ Cooperative (Yazko) which was active in the period of September 12 [1980 coup d’état]. It is also a valuable publishing experience for feminists. The adventure of feminist publishing that started here was going to extend to periodical publications (magazines), books, and even publishing houses. The foundations of the grand experience of “making the feminist voices public”, of which Çatlak Zemin is one of the heirs, were laid in those years.

The 4th Page of Somut is the first periodical in which the second wave feminists publicized their views. Writers’ Cooperative (Yazko) took over the weekly magazine Somut. The 4th Page of Somut which published the early feminist articles from 4 February 1983 until the last article on 5 August 1983, became a platform for dozens of valuable discussions blending theory with everyday experiences. Women who have labored for the production and translation of the basic texts of feminist movement wrote in these pages. The 4th Page published the letters sent to the editor from all over Turkey, providing a space for women’s experiences to be voiced. Both Turkey-specific matters and the discussions on women’s rights in the world were featured together. Texts produced used different models such as analytical texts, follow-up discussions, cultural themes and experience-sharing.

Knowing that feminist consciousness does not develop in a blow and that a feminist language against the male language, as the extension of the sexist world, cannot be formed in one stroke, feminists worked hard to form a new language as well as to find their own voice in all walks of life.  Analyzing and exposing the patriarchal codes, the 4th Page features diverse articles ranging from bodily rights (accessible healthy contraceptive methods, pre-natal and post-natal care, abortion bill, etc.), violence against women, legal regulations concerning women and selected news from the world, issues such as domestic labor, work life, and right to education to myriad cultural productions such as the critique of sexist jokes denigrating women and lullabies, movies with female protagonists (Kramer vs. Kramer, Mine, etc.) and sexist advertisements. For instance, in an article, Lawyer Canan Arın gives and analyzes various examples of sexist jokes which clearly objectify women in different cultures: “Male joke celebrates the ‘freedom’ of the man in humiliation of women. An aggressive point of view is what constitutes the basis of the male joke”, “In one instance, you see that woman is represented as lustful, in others as frigid or dead. All these can also be done with a plastic sex doll. In that case, who is being really humiliated? Is it the woman who is in an object position, or the man who is proud to be a mating machine?” 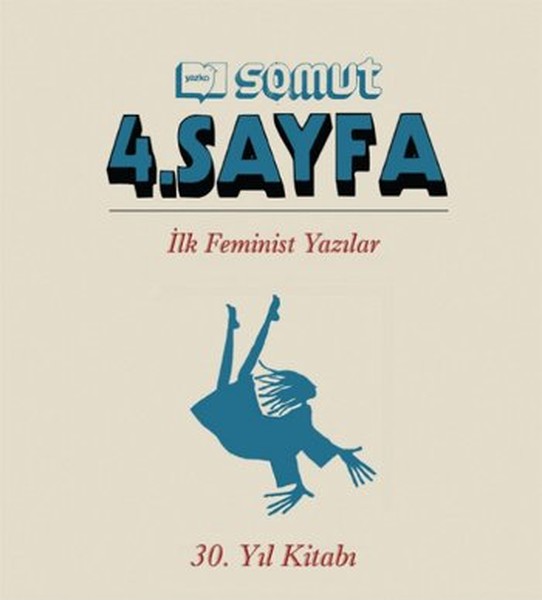 When we came to 2013, 30 years have passed since the early feminist writings analyzing the situation of women in the society. Thanks to the efforts of Stella Ovadia and Evin Doğu, this adventure was brought to daylight as a book published by the Foundation of Women, Culture, and Communication. The book titled 4. Sayfa – İlk Feminist Yazılar 30. Yıl Kitabı (The 4th Page – Early Feminist Writings, 30th Year) consists of four parts. The first part features how the generation engaged in the feminist movement felt when they read the 4th Page. The second brings together what those who had written in 1983 think when they re-read their writings 30 years later. The third part compiles the articles published on the 4th Page. And finally, the fourth part gives the life stories of feminists of all generations who contributed to this collection.

The anecdote told by Gülnur Savran, whose writings were features in Somut and who made valuable contributions to the feminist literature in Turkish with her writings and translated books, mirrors the adventure of the movement. Stella -probably because of possible reactions- wants to warn İstanbul that “the word feminist should not be on the name of the page”, but she cannot make a call from her phone at home (in Paris). Her child is in fever, so she cannot leave home leaving the child behind. Gülnur goes to Stella’s place to take care of the child, so, instead of the word feminism, a small femina symbol is placed in the title of the 4th Page. Şirin Tekeli, while talking about the same femina symbol, says, “In my head, the size of that femina was very big. When the Women’s Library was founded (1990) and I saw the original page, I laughed a lot.”

This journey, which became public on the fourth page of Somut, later turns into a great adventure extending to publications, meetings, mass parades, and institutionalization experiences.

The struggle against patriarchy in Mytilene / Interview with Anormia

The woman who doesn’t give up on “focusing on women”: Şirin...

Patriarchal labor exploitation in agriculture and its implications for feminist politics