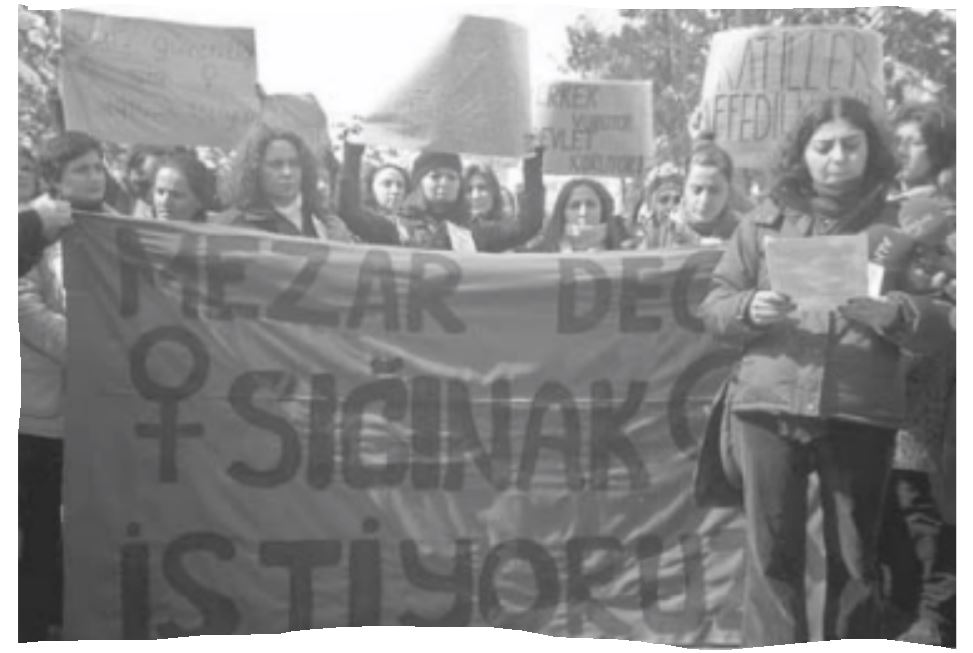 After Güldünya Tören’s death, who was raped by a relative and got pregnant and then killed following the decision taken by her family, a press release was read in Zincirlikuyu Cemetery accompanied by placards, pins, and a banner which said “We want shelters not graves”. The following text is from the press release of the demonstration which was called by the feminists and participated by almost 100 women:

WE WANT SHELTERS NOT GRAVES!

We, women, have said this yesterday, we are saying it today, and we will continue to say it tomorrow:

OUR BODIES, IDENTITIES, OUR LABOR BELONG TO US.

Neither your customs, nor your traditions, nor your male dominated system can dissuade us from our word. For many years with our struggle against male domination and sexism, we made the legal amendments addressing violence against women. Nonetheless, still our most fundamental right, our RIGHT TO LIFE is being violated today. In these cemeteries there are MANY WOMEN WHOSE RIGHT TO LIFE HAS BEEN TAKEN FROM THEM.

Güldünya’s story is not different from the stories of other women who have shared the same fate. She first fled to Istanbul knowing that the male members of her family would relentlessly and mercilessly try to kill her. Then, she appealed to the law enforcement. For Umut’s safety she left  her child. But, if there was a women’s shelter which could have opened its doors to Güldanya, then she would have been alive today.

The police which send women who appeal to the police stations on account of being exposed to violence by their husbands back to their homes, saying that “it is your husband, he can love you and beat you”, did not pay any attention to her appeals. Güldünya, who was shot in the middle of the street and attacked by the killers in the hospital. We, women, have filed a criminal complaint against those witnesses who did not take any measures to prevent this remorseless murder, the law enforcement officials, and Bakırköy State Hospital officials included. We do not want to, once again, see the decision which states that there is no ground for investigation. We want those public officials who do not fulfill their obligations to be penalized.

We are living in a country where all kinds of violence against women is legitimized and honor killings are considered rightful. We have been saying for years now that legal amendments would not suffice on their own; we kept on saying that the real problem is society’s and state’s perception and understanding of women and we will keep on saying this. We are repeating here once again that our struggle is against the male domination.

In line with the UN resolutions, we urgently want both the allocation of a sufficient share from the government budget in order to eliminate violence against women and the opening of WOMEN’S SHELTERS, which are vital for women’s life safety, with the capacity for 7,500 women and children. WOMEN’S SHELTERS SHOULD BE OPENED AND THEIR ADMINISTRATION SHOULD BE LEFT TO WOMEN.

We want honor killings to be processed as an AGGRAVATING CAUSE just like the feud murders, we want no sentence reduction in such cases, and we want the Penal Code to be amended in accordance with all the changes we request. We are not going to marry the rapists! We will not be discriminated against based on our gender! “Our virginity” and “our honor” are not your business.

Born in 1982 in the village of Budaklı of the Güroymak (Norşin) district, Güldünya was killed after the decision taken by the family because she was raped by her relative and got pregnant. Güldünya is one of the symbols of femicide. Güldünya, who fled to Istanbul after her family’s decision to kill her, was found by her brothers and shot in the middle of the street on March 1, 2004. Güldünya was taken to the hospital and she was killed there by his brother who found her in the hospital 12 hours later.

Her relative Servet Taş, who raped Güldünya, was also killed on October 14, 2011.

(Is there anything) beyond the silent majority?

31 December 2008: Another Purple Needle demonstration in Taksim at New...