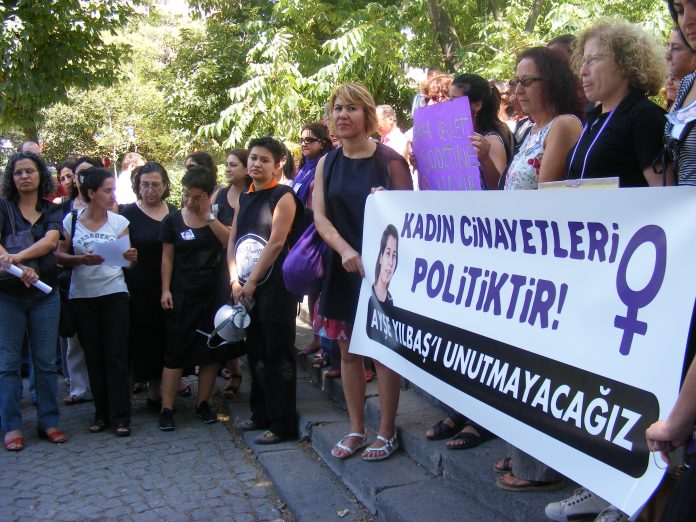 The case of Ayşe Yılbaş who was murdered on 22 February 2008 by her husband whom she wanted to divorce set an important example to feminist experience of being intervening party in femicide cases.

Just like Sevim Zarif who was murdered by her ex-husband on 22 July 2007, Ayşe Yılbaş was a woman we had contact with. She was a student at Cerrahpaşa Medical School. She was separated from her husband. She and her child were staying at her family home. She was about to divorce. Her divorce case was represented by two feminist lawyers. While working at the neurology clinic, Ayşe was murdered by 12 bullets by her husband Sergeant First Class Hüseyin Güneş Özmen whom she wanted to divorce.

Ayşe Yılbaş case was not the first legal case in which feminists are the intervening party. By the time this case started, our political stance against femicide was clear, and we had become experienced in how the male justice works in femicide cases.

Legal definitions of honor killings had been left behind at the time, and the definition of femicide was being used [in legal cases]. It was also expressed that the femicides are political and the reduction of sentences due to unjust provocation was a “reduction for manhood”.

Demand for being an intervening party in femicide cases had long been a part of the feminist politics. In this case, too, a petition for being the intervening party was given on behalf of Mor Çatı and other women’s groups. It was not accepted. Feminist lawyers pursued the lawsuit as the plaintiff’s counsels. During the prosecution, both the murderer of Ayşe Yılbaş and his counsels claimed that the murder took place as a result of “unjust provocation”. The local court did not decide on any reduction and sentenced the murderer Hüseyin Güneş Özmen to aggravated life imprisonment. The murderer was sentenced to two aggravated life imprisonments both for pre-meditated murder and for the fact that this murder, which was committed before the completion of the divorce process, was committed against the spouse (28.07.2009).

In the murder cases of Sevim Zarif and Pippa Bacca who were not represented by feminist lawyers, there were no aggravating circumstances –legally defined as “committing murder against the spouse”–  since the murderers did not have any kinship ties with the women murdered. Since the panels of judges neglected the charges of killing with monstrous feeling (Pippa Bacca) and pre-meditated murder (Sevim Zarif) as aggravating circumstances, the murderers were sentenced to life imprisonment (22.07.2009). In this respect, it was very important that in the Ayşe Yılbaş case the husband (who had official kinship ties) was sentenced to aggravated life imprisonment without being granted unjust provocation reduction. This case was perhaps the first one.

The case of Ayşe Yılbaş was significant for the involvement of feminist struggle in court cases. Thanks to this case, we further comprehended the details which can be used in favor of male domination embedded in the current legal system as far as the femicide cases are concerned. It was experienced during this prosecution that the male justice eschews sentencing “pre-meditated murder and murder with monstrous feeling” and that divorced women and unmarried partners are legally more vulnerable to male violence.

Throughout the case of Ayşe Yılbaş, the issue of defense lawyers was also discussed. We witnessed that, in lawsuits, regardless of the method chosen by the defense lawyers, the right of defense is performed with the aim of saving the client with little or no punishment. It became manifested at every stage of the prosecution that the defense lawyers were drawn into the whirlpool of male justice. Bahri Belen, Ayşe’s murderer Hüseyin Özmen’s first divorce lawyer and, later, defense lawyer following the murder, built his defense strategy by embracing the values of the male-dominant system and relying on the misogynist policies. Defending that the murderer’s mental condition was not stable and that he committed a love/passion crime, the lawyer demanded unjust provocation reduction from the court. Bahri Belen, a human rights defender, was proposed to withdraw from the case before the prosecution started, but he rejected the request on the grounds that his client would “suffer”. Bahri Belen assumed the role of the intervening party not only by being the murderer’s lawyer. He took off his gown and testified in favor of the murderer Hüseyin Özmen. When the court of cassation dismissed the case and the second round of prosecutions started, Bahri Belen resigned from his post as Hüseyin Özmen’s defense lawyer. In case of Ayşe Yılbaş, just like in the case of the murder of Sevim Zarif, the murderer repeatedly stated his discomfort about feminists’ and women’s organizations’ involvement in the case. And the defense lawyers seconded his statement.

All in one shout: On pregnancy conversations with Rita Ender