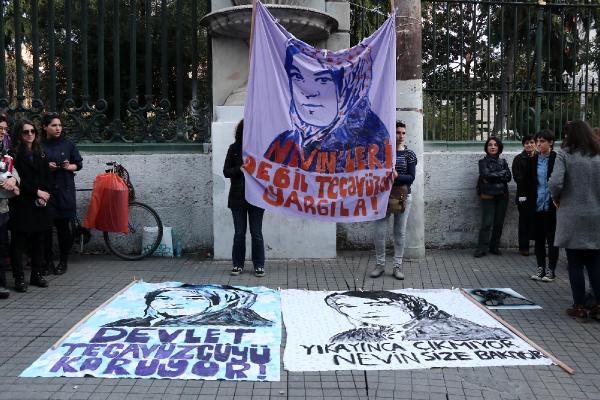 Nevin Yıldırım from Korukaya village of Isparta’s Yalvaç district killed her relative Nurettin Gider who  repeatedly raped her  at gunpoint on 29 August 2012 and threw his head in a sack in the village square saying, “here is the head of the guy who dishonored me, don’t you ever talk behind my back.”

Nevin was 26 years old and 24 weeks pregnant when she killed the rapist. She was forced to deliver the baby about whom Nevin had said “I will give birth to this child over my dead body!” “Every time it moves in my womb, it reminds me of the rape and the rapist,” Nevin said.

DNA test results showed that the father was Nurettin Gider. The baby was taken under the legal custody of the state and put into foster care.

The state jurisdiction which does not protect women from male violence filed a lawsuit against Nevin −who owned her life and killed in order to survive− demanding an “aggravated life imprisonment for murder with monstrous feeling”.

Feminists who went from Istanbul, Antalya, and Adana to the hearings during the process of trial which started on 4 October 2013 stood in solidarity with Nevin by visiting her in prison, sending her letters and postcards, and organizing protests in Isparta and Istanbul before and after the trial. They expressed that women who resist male violence and own their lives are not alone. On 25 March 2015, in the final hearing in Yalvaç Courthouse, male justice which grants all kinds of sentence reductions and acquittals to men who kill women sentenced Nevin to life imprisonment without reducing the prison time on account of unjust provocation or good conduct, let alone acquitting her for justifiable self-defense. During the final hearing, feminists, including the lawyers, were not allowed in the courthouse upon the prosecutor’s instruction and were battered.

Nevin Yıldırım’s case was dismissed by the court of cassation and reheard in the local court. However, the local court passed the same verdict again.

Nevin Yıldırım is currently in Antalya Penal Institution and the process of appeal to the court of cassation continues.

Chronology of the hearing that sentenced Nevin to life imprisonment: 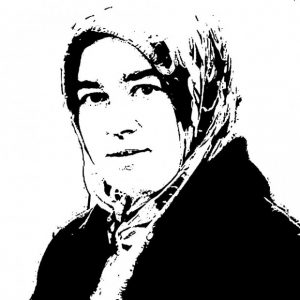 The first hearing of Nevin’s case was held on 4 October 2013, that is, 402 days after the incident. During the hearing, Nevin was asked whether or not she had a consensual love affair with Nurettin Gider. Nevin told that they had no relation relationship whatsoever and that she was subjected to rape. Nevin responded to the chief judge’s question of “Do you regret?” saying, “Yes, I regret, but I would do it again for my honor and dignity, I would cut [his head off] again.”

46-page long indictment filed 304 days after the incident by the Chief Public Prosecutor of Yalvaç, charged Nevin with “intentional and pre-meditated murder with monstrous feeling”. The prosecutor sought “aggravated life imprisonment” for Nevin.

The panel of judges adjourned the hearing to 15 November 2013 requesting a psychiatric evaluation report from Süleyman Demirel University (SDU) Department of Psychiatry in order to determine whether Nevin was mentally stable.

Various people from the village attended Nevin’s second hearing as witnesses. Halil Hilmi Tütüncü, Nevin’s lawyer, said that witness testimonies were hearsay evidence, and it was obvious that Nevin was raped.

After the witness testimonies, the panel of judges ruled for the continuation of Nevin’s detention. Besides, the panel decided to refer the case file to SDU Faculty of Medicine Department of Psychiatry for evaluation. The hearing was adjourned to 10 January 2014.

In the third hearing, witness testimonies continued. Nevin’s lawyer Halil Hilmi Tütüncü reminded that she was sent to the hospital to procure the report requested for her criminal capacity evaluation and said that he found no relevant documents in the case file. The lawyer requested an  adjournment of the trial. The panel of judges were requested to examine the reports and add them to the case file. The hearing was adjourned.

The Istanbul Forensics Medicine Institute 4th Department of Specialization reported that Nevin was mentally sane at the time of the crime, that she had no mental instability, or any mental illness. The report was accepted with six members’ affirmative votes against two members’ negative votes.

In this hearing, the forensics medicine report was examined. Hüseyin Aksoy, Nevin’s lawyer stated that they would object to the report. He said that the views of two board members who casted negative votes were also important. Nevin said, “They didn’t do anything at the board. They only asked my name, surname and how many children I have. Then, they said, ‘you can go out.’ I spent two days on the road. I do not accept this.”

The panel of judges overruled the request for reevaluation and ruled that the existing report was sufficient. Since during the trial process Nevin was not involved in crime scene visits, the prosecutor requested another crime scene investigation and the examination of the knife used in the incident.

The panel of judges overruled the motion for crime scene investigation by the prosecutor who was commissioned in the previous hearing. Prosecutor Osman Çubuk, who could not attend the previous hearing since he was working in another city, stated that the examination of the knife and crime scene investigation were not required. Objecting the prosecutor’s opinion, Nevin said, “I have restored my honor. I had neither a love affair, nor I had taken photos with him. All the witnesses are from his close circle, they paid the witnesses to speak.”

The court was adjourned to March 25. Due to the length of the period, it was decided that the case file would be reviewed on February 9. 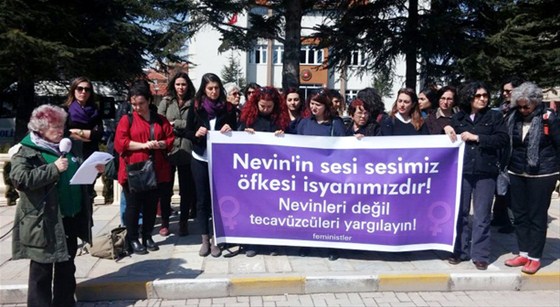 Feminists went to Yalvaç district of Isparta for Nevin’s final hearing and made a press statement in front of the courthouse. After the press statement, feminist women including lawyers, were not allowed in the courthouse and were battered. Women were subjected to violence by being dragged down the stairs by the police upon the instruction of the public prosecutor. Only a few people were allowed in. The judge said, “Yes, I gave the instructions. I don’t want any audience.”

At the hearing on March 25, the verdict was announced: Nevin was sentenced to aggravated life imprisonment.

Nevin was not granted any sentence reduction, neither for good conduct nor for unjust provocation.

Kocaeli Women’s Platform protested after Nevin was sentenced to life imprisonment. At the protest, feminist women marched chanting “Not women but the rapists must be given life imprisonment”, “We demand real justice, not male justice”.

After Nevin was sentenced to life imprisonment, the Emergency Measures Coalition Against Femicide called all women to chant “We demand real justice, not male justice!” At the protest held in Galatasaray Square on 29 March 2015, women demanded freedom for “women who defend their lives”.

IFC started a petition under the title of “Freedom for Nevin”. erktolia.org, a feminist platform which organizes online petitions supported the campaign. http://erktolia.org/p1150/

Feminist artists put up the sheets on which they drew Nevin on various locations in Istanbul. A call was published under the title of “For justice to women, we are revealing the injustices we go through!” A protest was held in Galatasaray Square on 16 April 2015 where women shouted the slogan “Nevin is looking at you, you cannot wash it off.” 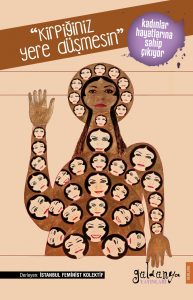 Istanbul Feminist Collective titled its 2015 August report “Women Are Owning Their Lives”. The report demanded justice for women who defended their lives against various forms of violence.

A book titled “Kirpiğiniz Yere Düşmesin” – Kadınlar Hayatlarına Sahip Çıkıyor [“Wish You Come to No Harm” – Women are Owning their Lives] was published by Güldünya Publications. The book comprises of excerpts from Istanbul Feminist Collective’s monthly reports and interviews with women who were covered in the reports. The book was named after the message Çilem[1] sent to women.

The Court of Cassation hearing was held. The Court reversed the judgment on the grounds that the local court closed the case before the investigation pertaining to whether Nevin committed the murder by herself was finished.

The Emergency Measures Coalition Against Femicide organized a protest in Kadıköy in 2018 demanding freedom for Nevin. 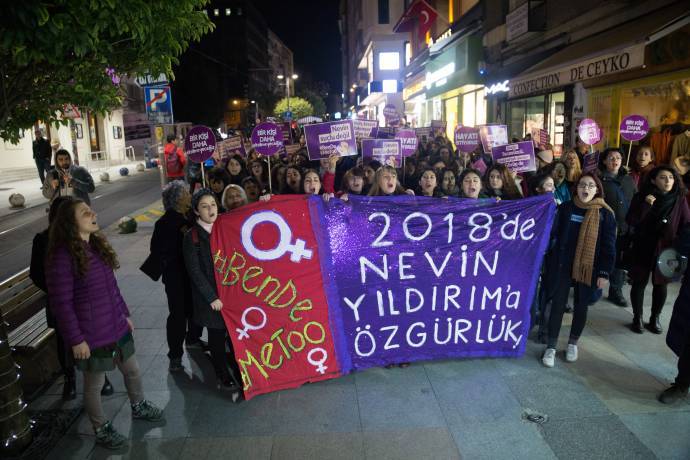 The retrial of Nevin Yıldırım’s case started in the local court. Feminist lawyers demanded the release of Nevin and the retrial to be more detailed on the grounds that the villagers’ statements were contradictory. During the hearing Nevin Yıldırım said that she committed the murder. The court overruled the request for release and adjourned the court to January 24.

Feminist lawyers demanded that a detailed report be obtained from Istanbul University Forensics Institution to examine Nevin’s statement on the grounds that Nevin’s statement “I have been raped” has never been investigated by the panel of judges throughout the trial and the local court gave its verdict based on its belief that Nevin had a consensual affair albeit Nevin’s statements about being raped. The prosecutor, in his consideration, reiterated in their life imprisonment request for Nevin. The panel of judges overruled the motion for forensics report and release request and adjourned the hearing to March 21.

Feminist women from Antalya, Adana and Istanbul went to Yalvaç to follow Nevin Yıldırım’s final hearing. Nevin, who had to kill the man who raped her for years, was not granted sentence reduction on the grounds of unjust provocation or for good conduct. The panel of judges sentenced Nevin to life imprisonment. The panel did not even grant sentence reduction for good conduct to Nevin who just graduated from high school and is preparing for university. 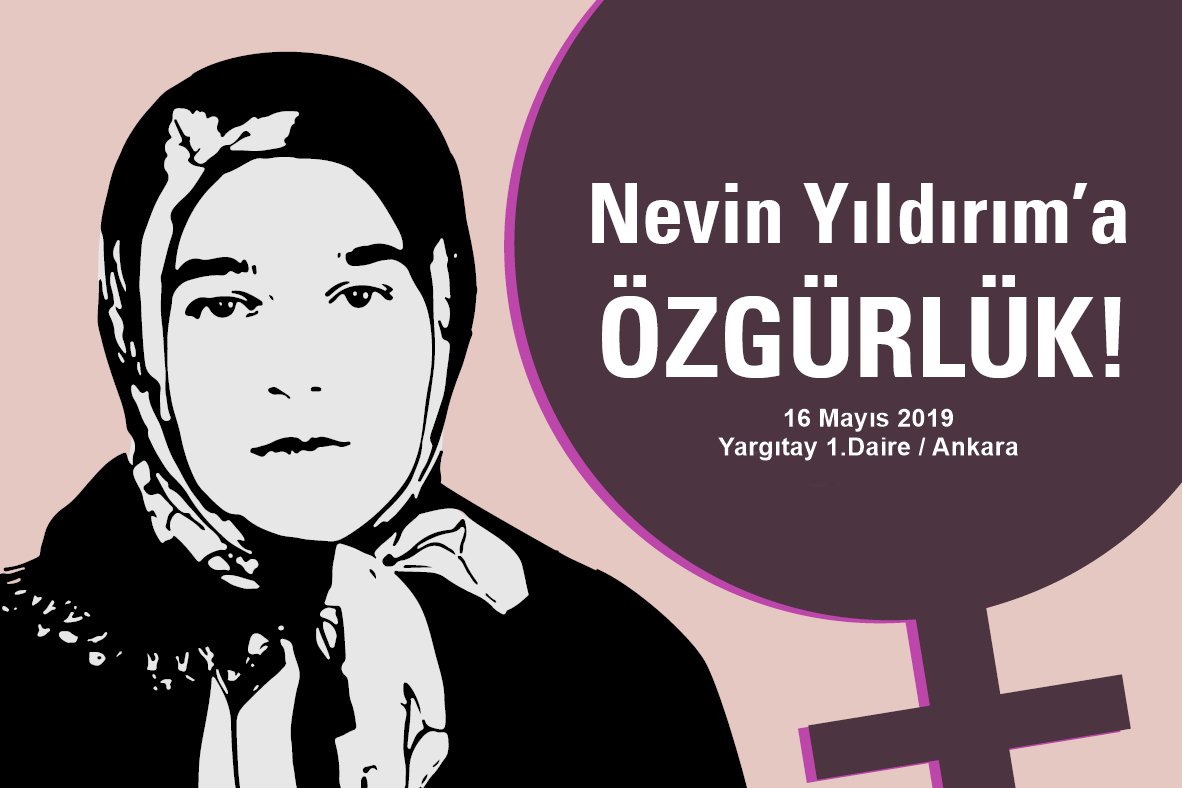 While men who kill, rape women are granted sentence reductions on grounds of good conduct and unjust provocation, the Court of Cassation approved life imprisonment for Nevin which is the severest punishment that could be inflicted. After the hearing held on 16 May 2019, the Court of Cassation announced the approval decision on 23 May 2019 which showed us, once again, that the justice is “male” and will continue to protect men. The only positive aspect of this decision was that Meryem Üstüner, a member of the Court of Cassation, lodged a statement of opposition regarding the need to apply [sentence reduction for] unjust provocation…

[1] Çilem (Doğan) is another woman who was put to trial for killing her husband who was violent towards her. (Editor’s note)

Why do women artists still exist?