Just like all the other cliches about womanhood and manhood, sayings such as “women cry over everything”, “men don’t cry” are also banal. And again, like every other cliche they have turned into self-fulling prophecies. 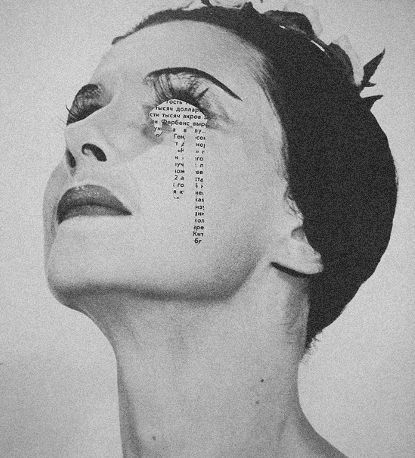 Tomek, the protagonist of the movie A Short Film About Love asks, “Why do people cry?” The response −from his friend’s mom− is clear: Because they suffer. We might think that this response neglects tears of joy, but perhaps the right thing to do is to distinguish weeping −of joy, happiness…etc. or for any other reason− from crying. As a matter of fact, I will leave the science of crying to the scientists. However, having read Heather Christle’s The Crying Book which made me contemplate the relationship between shedding tears or crying and our moods, I will take the opportunity to raise the issue of crying once again.

What brought me back to the dialogue in the aforementioned movie −and also made me think of details about crying from different texts− which of course made me cry at the end, was the linguistic/conceptual differentiation author Heather Christle was making between crying and weeping: “As far as words go, crying is louder, weeping is wetter. When people explain the difference between the two to English-language learners they say that weeping is more formal, can sound archaic in everyday speech. You can hear this in their past tenses −the plainness of cried, the velvet cloak of wept.”

The author’s linguistic touch opened new doors/brought up new questions for me. We can weep for joy or a bodily feeling  −perhaps more for a bodily pain. But is this considered crying? What is crying? As I mentioned, leaving the science of it to the experts, I pose the expected questions: Do men cry? Or: Why do women cry a lot? Why do the images of a crying woman and a crying man end up being so different? This issue comes up a lot in movies and books. For instance, in the novel Normal People, we see how drastically different the reactions of the female and male characters are −since the woman cries at the end− while they are watching a movie: “They watched The Umbrellas of Cherbourg in her apartment. But at the end Marianne cried, but she turned her face so it looked like she wasn’t crying. This unsettled Connell. The film had a pretty sad ending but he didn’t really see what there was to cry about. Are you ok? he said. She nodded, with her face turned… […] Hey, you’re not pregnant or anything, are you? Marianne laughed. That settled his nerves.”

Yes, as we see in this example from Normal People, crying makes people uncomfortable. And the conception that women cry often or over “everything” and men don’t, circulates with texts and books, and also becomes a predominant belief −or delusion− in our daily life, mundane stories.

Certainly, most of us have heard the sentence “I’ve never seen him /(her) cry”, and this phrase is often uttered with reference to a man. Or stories that start with “I’ve seen my father cry only once”, memories that are intensified by “My grandmother/mother/sister would lock herself up into her room and cry secretly for hours”.

In The Crying Book, Heather Christle frequently touches on the issue of women crying “A kitchen is the best −I mean the saddest− room for tears. A bedroom is too easy, a bathroom too private, a livingroom too formal. If someone falls to pieces in the kitchen, in the space of work and nourishment, they must be truly coming undone. The bright lights offer no comfort, only illuminate. The floor should be vinyl and cold. … Charlotte Perkins Gilman −feminist writer, sufferer of postpartum and other depressions− proposed in 1898 that private kitchens be abolished, as the work they demanded of women left them with no time for other activities. ‘The cleaning required in each house would be much reduced’ she argues, ‘by the removal of the two chief elements of household dirt −grease and ashes.” does not mention a corresponding reduction in tears.”

Just like every other cliche about womanhood and manhood, sayings such as “women cry over everything”, “men don’t cry” are also banal. And again, just like every other cliche they have turned into self-fulling prophecies. We actually see women crying more often, and it is either frowned upon or unsettles people. Typically, they relate the crying to biological reasons and resolve the issue through this particular explanation. When we come across a man crying, we tend to treat it differently.

As a child, I remember frowning upon my mother for crying over a movie. Indeed, even as a child. (Of course this also has something to do about finding most things regarding adults strange, but nevertheless the fact that I caricatured my mom’s crying is worth noting.) So, I made fun of my mom, then what? I ended up striving to sigh silently in dark movie theaters, drying my eyes before the lights went on.

There are strange dilemmas in and challenges to crying in a public space, in a group or in between friends. Sometimes, when I’m telling someone a story or when somebody is talking about a sad event and shedding tears −even when I really try hard not to− I can’t help but cry or tear up, my voice gets shaky. I get really angry at myself in these cases. Instead of consoling the other person, I’m crying over there, in other words putting my feelings before theirs. It is annoying in all aspects. Or let’s assume that I was angry about an unfair situation, and I immediately start crying over it. Then I feel embarrassed, because I desire being the strong woman, waving her fist, showing her muscles, breathing fire instead of crying like a baby. However, these are the dreams and realities at hand. I also find myself phony for crying over someone else’s pain or loss. Even after the fact, I question whether I forced myself to cry, if my tears have been sincere. I feel guilty, pondering why I had to cry, telling myself I could have refrained from crying. Sometimes crying really transforms into such a challenge. Maybe the regret over crying at that moment stays with us for years. Actually, there are moments in which we can refrain from crying. But in certain situations that I also mentioned above; even if you’re in a crowd, a dark movie theater; no matter how hard you try, you break into tears.

It might be hard to believe −or perhaps it’s a common experience among women who attend marches−, but during the 8th of March night marches, while I’m marching and yelling out with hundreds of women on giant squares, streets, sometimes it’s hard to hold my tears. For instance, while we’re yelling out “Women won’t obey”, I feel a rush of emotions, my voice shakes and I can’t get over it for a while, my eyes tear up. While I’m trying really hard not to cry, I see that a group of women right near me are already dancing the halay or crying out “you’ll see what I’m capable of”, dancing to it.

Since the hallowed day is approaching and it’s difficult to think about anything else, I’ll end by saluting the many 8th of Marchs, and the 19 years of night marches on account of our conversation on crying.  No one should think that our tears have dried up. We’re making peace with both our laughter and tears,  and we will certainly make our peace with it. We’ll carry on dancing, laughing along on the streets until our eyes are filled with tears, until we shout ourselves hoarse.

Pink Life LGBTI+ Solidarity Association: “The decision to withdraw from the...