Aside from the “amateur philosopher” –as he calls himself– Homer’s “orientalist” dreams about Greece and director’s (Jules Dassin) caricatured representation of this American character played by himself, the movie offers a different reading on Medea. Illia, played by Melina Mercouri reinterprets Medea and introduces a happy ending to her story in 1960, long before Christa Wolf’s modern interpretation. The scene, in which she talks whilst playing the barrel organ, trying to convince Homer –who has professionally studied Greek tragedies– that the actual plot of the story is different, is a magnificent one. Later, Melina Mercouri plays the role of Maya; an actress playing the role of Medea, in a different movie (A Dream of Passion) also directed by Jules Dassin in 1978, perhaps departing from this inspiring scene. But to be honest, Melina/Illia impresses me the most with her dance performances and stroll every time I watch this all-time favorite. 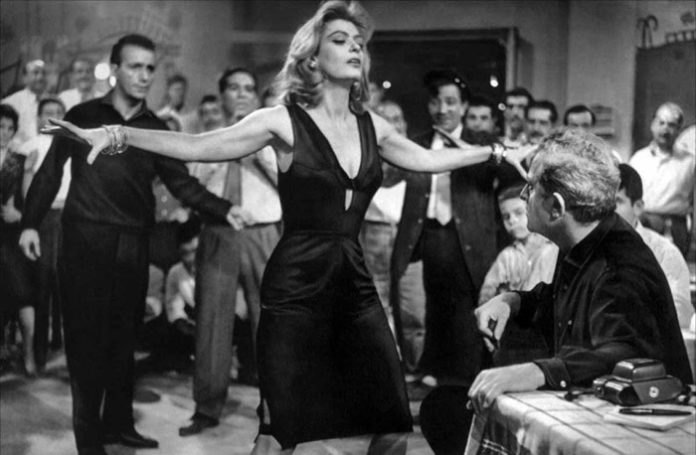 There’s a movie scene I’ve been watching over and over again for years whenever I feel upset, sometimes when I’m happy and definitely when I’m just chilling at home on  sundays. A scene in which Melina Mercouri is at home; she puts a record on the record player all of a sudden and starts dancing somewhat crazily by herself. This scene is from the movie Never On Sunday (Ta Pedia tou Pirea). When I’m watching it, occasionally I also get up and dance, and even if I don’t, I definitely tap my fingers sitting down. There’s a second scene where the same song is playing this time without lyrics, one that pulls me in every time. It’s a great syrtos scene.

While all the actors and actresses in the movie are playing syrtos, they challenge Homer with their hands in the air or tapping their fingers. Because Homer had told Taki the bouzouki player that he’s not a real musician since he can’t read notes; Taki had been offended, and he had locked himself in a room. Nevertheless, in a short while Illia convinces him that it is extremely valuable to be an illiterate musician, and they all lose themselves in the rhythm. Actually, this is also the scene where everything gets resolved. It marks the defeat of the American intellectual and him becoming somewhat local. Apparently, I’m not the only one impressed by the movie and its soundtracks. Manos Hajidikas who made the soundtracks received the Oscar for the Best Original Score with this piece in 1960, and English cover versions were made as expected.

But I contemplated the whole movie, why I like it so much, Illia and her comment about Medea for the first time only a few days ago. Then I watched the movie once again. I made it through the end feeling a sense of victory again. Especially, the scene in which prostitutes are resisting at the prison was amazing. A group of women dancing and singing in jail. Their attitude. The way they act together to lower the rents. And their leader Illia.

So, who is Illia? She is a prostitute who is independent, never takes anything lying down, refuses to pay racketeers. She only sleeps with the ones she likes. She is friends, equals with the local fishermen, captains, workers and shopkeepers at the Piraeus harbor, and sleeps with them as she pleases. Among the sailors who visit the harbor, she chooses not the ones who give her the most money, but the ones she finds likeable as customers. Illia is a confident, unapologetic woman who doesn’t question life. Besides, she is affectionate. And perhaps most importantly, she is a happy woman. Beautiful, attractive; her boldness is very particular- just like Cemal Süreya describes in Üvercinka: “ the boldness even the most alluring woman lacks”. And just like the course things take in Süreya’s poem, whenever Illia appears in the movie sex gets involved in one way or another, even in settings such as the tram between the Pireaus harbor and Athens.

Illia is my role model. Who I strive to be like or who I want to be. I’m telling you, she’s happy, what else is there? However, I’m not the only one who idolizes Illia. The naive, idealist American tourist Homer –yes, his father named him after Homeros, since he was infatuated with the Ancient Greece– who appears at the Piraus harbor also idealizes her, but he wishes to save her. He sees her as a symbol. But the common sense of the ignorant masses is sharper in its analysis. Tonio says: “Illia is not a symbol, she is a woman.” But to Homer, she is a challenge, a symbol. According to him, Illia is the symbol of the corruption of the amazing civilization of Ancient Greece has gone through. Homer, who is a Western cliché constantly looking around taking notes has theoretical philosophical, explanations for this. He walks around, keeps saying “A prostitute can’t be happy, and this brutal world is not a happy place”. He talks as if he is Platon, saying he wants to get inside her head, replace the fantasy with illogic, immorality with morals. When he says “You have to be logical, I mean this is Greece”, he is referring to Aristoteles and Platon. But Illia doesn’t like Aristotle. “He’s a bad man” she says, “he looks down on women”. When Homer says “Aristotle also walked around this harbor, Aristotle who came up with logic, oh God Illia, don’t you ever think about how amazing this is?”; she responds in such a teasing manner saying “eveeerryyy dayyy”…

Homer tries to convince Illia. He wants to transform her, actually to save her. He tries to explain to her that one can’t get anywhere with bodily pleasures, one needs mental satisfaction for actual happiness. The rest of it is a Pygmalion cliché.  The mobster of the region Mr. No Face gets disturbed by Illia working independently; since he wants her to quit the business, he pays Homer, and together they put her through some sort of training camp. Barrel organ gets replaced by piano; syrtos gets replaced by baroque violin concertos. They put a sign on Illia’s door saying “closed for educational purposes”, her shelves fill up with books, but every single day her pallor worsens. She strives to pay for presents that have been given to her in the past, fish and vegetables. Over time, she starts to think that she’ll be a better person this way. “Maybe my life isn’t fun anymore, but it is better” she says to Spiro the fisherman. The overbearing dream of becoming virtuous makes a troubled woman out of her. She loses her joy. She is looking at the Picasso painting, the chess board surrounding her, listening to a violin concerto that bores her, right before the scene I like the most. The scene starts with her putting on an old record all of a sudden, with a spark in her eyes. It’s all downhill from there. She leads the women resisting Mr. No Face for making them suffer with the high rents. When she hears that Homer was working with him, she burns down everything that has been brought to her, and goes back to her old self. My second favorite scene is the syrtos scene right following this. The scene in which Homer confesses that just like the others he always wanted to sleep with Illia; and Tonio –who is also in love with Illia– says now it’s too late, embracing her.

Is Illia the ideal woman or one that has actual desires? Masculine art, literature, philosophy, religion, they all want her to be a faded idol, but Illia is standing there fearlessly, so full of life.

Of course, you can ask whether or not there is anything wrong with the movie, if it’s politically correct to that extent. The movie includes men from various professions, but only Illia and other women who are all prostitutes. So, we end up being curious if all these men who are crazy about Illia have lovers, wives, sisters, mothers (another noteworthy scene is the one where Homer gets beaten up after he makes a psychoanalytical remark about Jorgo’s mother); because we don’t see any other women. Perhaps, it’s because the movie is about their relationship to Illia, and the other women are not included in that narrative, but obviously this is a missing element. Nevertheless I can’t evaluate it critically in this sense too, because it has such a fascinating and utopic establishing shot, and that is enough for me. Illia is running to the harbor with a basket in her hand, simultaneously taking her clothes off. She takes off her sandals, skirt and blouse respectively on the way and jumps into the sea with her bikini. There are a lot of guys applauding her arrival, cheering. They are harbor workers, fishermen, captains but they don’t overdo it; they don’t even bother her. It is worth watching them all jump into the sea, following her lead. As soon as she challenges them saying “Are you slaves? All you do is work!”, they all follow her into the sea, one of them taking off his glasses, another one dropping his paintbrush into the water. Illia who drives all these Greek men into the sea with a single remark…

Homer, who says that he came to Greece to find the truth, throws away all the notes he has taken from the deck on his way back. Perhaps, he goes back to his hometown, understanding that reality is relative, who knows. The last time I saw this movie, this scene reminded me of a character from another movie (Gadjo Dilo) who breaks the gypsy music records he has made over months and buries them in the ground. Well, that’s a movie about the interaction of the modern world with gypsies’ idiosyncratic lives, but it’s not as joyful and light as Never on Sunday. Everything is more brutal there.

So, if you ask me what all this has to do with February 14th and love and think that I have misguided you; watch the movie and focus on the final scene. The final word is love. Even if it refers to the transformative quality of love, even if it uses the word “saving” with regard to Illia, I can ignore this tiny glitch and quote the final words with the captain’s heavy Greek accent: “With love it is possible”!

Moreover, if you really want to talk about love, –perhaps it started before the movie– see: the love between the director Jules Dassin and the leading actress Melina Mercourie…

The Case of Leftist Men Or: How not to make an...

Sexism in the DSM diagnostic system

Who will cover the expenses?