Even though she kept saying that she is a “shy feminist”, she was “the real deal” who was a trailblazer for many women across Turkey and even beyond. 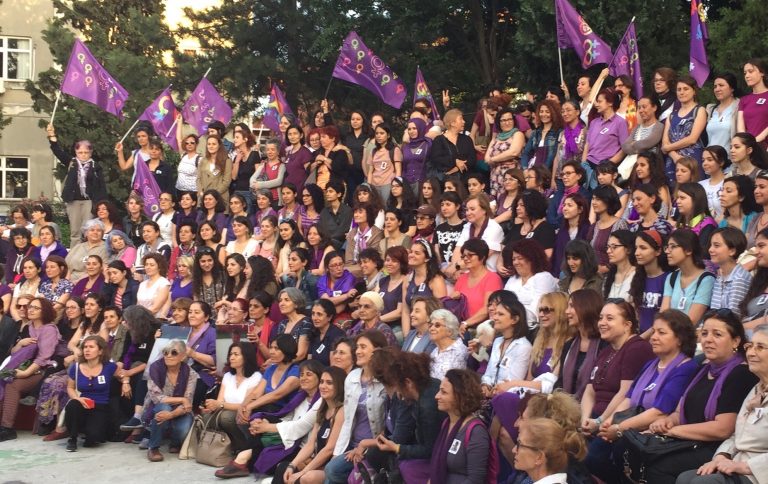 My dear Şirin please! I’ll take all your cases, get all your business done, but please, let’s not talk about that will stuff every year!

But of course, she wouldn’t listen. She considered being cremated, scattered at sea, donating her organs (but she would say that her organs were also useless at that point); in the end she decided to donate her body to the university to be used as a cadaver: She went ahead, signed the contract. She called me, as if she was bearing good news; she was relieved! In her final journey, while we were presenting her body to Professor Şebnem[1] and young doctors at the Istanbul Faculty of Medicine, I also almost felt relieved! I humbly asked: “Can you please tell the medical students that will examine her who she was, what kind of a woman she was?”

Şirin was a woman of science, so it was only natural that she dedicated her body to science. She was very naive, but equally devoted to science, realistic, and analytical. Even though she kept saying “I’m not at all interested in politics” in her final years, she was a political scientist really engaged in politics!

Even though she was saying that she is a “shy feminist”, she was “the real deal” who was a trailblazer for many women across Turkey and even beyond.

And of course, women in purple bade farewell to her…

When we view her childhood through her own words, her kindness to people of all ages and segments and her grace become crystal clear!

“I was born in 1944, meaning on the last year of the Second World War. I even have a sweet memory about it. My very first id had ‘ration assigned’ written on it.

My mother Hayrunnisa Köni and my father Yunus Köni were both philosophers. They were both teachers, but my father also had an administrative position in the Ministry of Education at some point. I spent my childhood in Ankara due to my father’s position. My father was openly atheist, my mother was agnostic. My grandmother (my father’s mother) was living with us, she was a Balkan immigrant; a woman performing prayers, fasting during the Ramadan. These are contradictory beliefs, but they had mutual respect while living in the same household, despite their differences. Thus, I spent my childhood in a tolerant environment. Later on, I became an anarchistic democrat, and stayed that way for the rest of my life; but origins of this political position actually lie in the environment I was raised in, in its democratic approach: People of different faiths living together, showing tolerance to each other. I guess this is the most important thing I can say about my childhood.”*

The neighbor’s son Mr. Demir, who was spending a lot of time with her in her final years, −as he is about seven years old it is hard to tell why she referred to him as “Mr.”, but he was also calling her “Ms. Şirin”−, the handyman Mr. Ahmet, Professor Mr. Cemil, were all treated with the same tact and respect in her life!

While feminism conveniently rendered us equals; as Şirin, Stella, Gülnur, Ceylan and Filiz…

We’ve undertaken a long journey with Şirin. She has opened doors for me, enlightened my path. I’m sure that a lot of other women feel the same way. But what is interesting is that she was able to do all of these things in a subtle manner; and that is unique; enlightening someone without “teaching” or patronizing them… I don’t know how many of us have that ability; how many of us guide others tactfully in this “cruel world”, I don’t know!

Ok, she was graceful, but Şirin was also very stubborn, very much so! She would never give up her beloved cigarettes! Despite her anxieties about the country’s political situation and her physical problems −especially in her final years− she neither gave up on smoking and drinking wine, nor on watching the news… She didn’t take advice from any of us; seriously, from any of us. She set the boundaries; we would know that our attempts were futile!

She led an incredibly modest life −throughout her life, but especially in the final years. Her cozy flannel dress with floral patterns wrapping her up was like an integral part of her! She neither had a lot of things, nor a lot of clothes; a cardigan, a flannel dress…

Above all, Şirin was erudite!

Briefly, the story goes like this: After her high school years, her mom rents their apartment which they inherited from her grandfather and sends her away to Paris. After taking language courses in Paris, she starts Law School there. But she realizes that she’s not into law and gravitates towards political science after moving to Lausanne.

She describes those years in her own words as follows:

“… Lausanne University’s Political Science Department had really good faculty members during those years. While I was in Paris, two thousand students were attending Maurice Duverger’s constitutional law class; it was hectic. We would get by with the photocopies. Whereas there were only thirty students in the Political Science Department at Lausanne; unlike the situation in Paris, we had close relationships with our professors”.

I realized later on when I was looking at my old report cards: Even though Marxism wasn’t on the rise yet −it was going to be really on the rise after 1968− I had shifted from existentialism to leftism for ideological reasons. I had repeatedly preferred topics related to Marxism in classes…”

Şirin graduates from school in 1967, comes back to Turkey. She starts working at the Political Science Department in the Faculty of Economics as an assistant in 1968. She and a group of her friends found the Association of Assistants in All Universities, Colleges and Higher Education Institutions (TÜMAS) in 1975.

She prepares a thesis on women’s participation in politics to become an associate professor during  the same years. This was a first in Turkey! And of course her thesis faces considerable opposition within the university. There was only one person defending her against those saying, “Political science is a serious field, what’s the point of focusing on women?”: Bülent Tanör!

Our dear Şirin Tekeli, our Şirin never gives up on “focusing on women” after that day, till the end of her life!

The path that started with YAZKO (Cooperation for Women Writers and Translators) women series, working on the journal and the first feminist writings published on Somut magazine led to a proposal presented for debate before the Parliament for the implementation of the Convention on the Elimination of All Forms of Discrimination Against Women (CEDAW) with thousands of signatories on 8 March 1987… 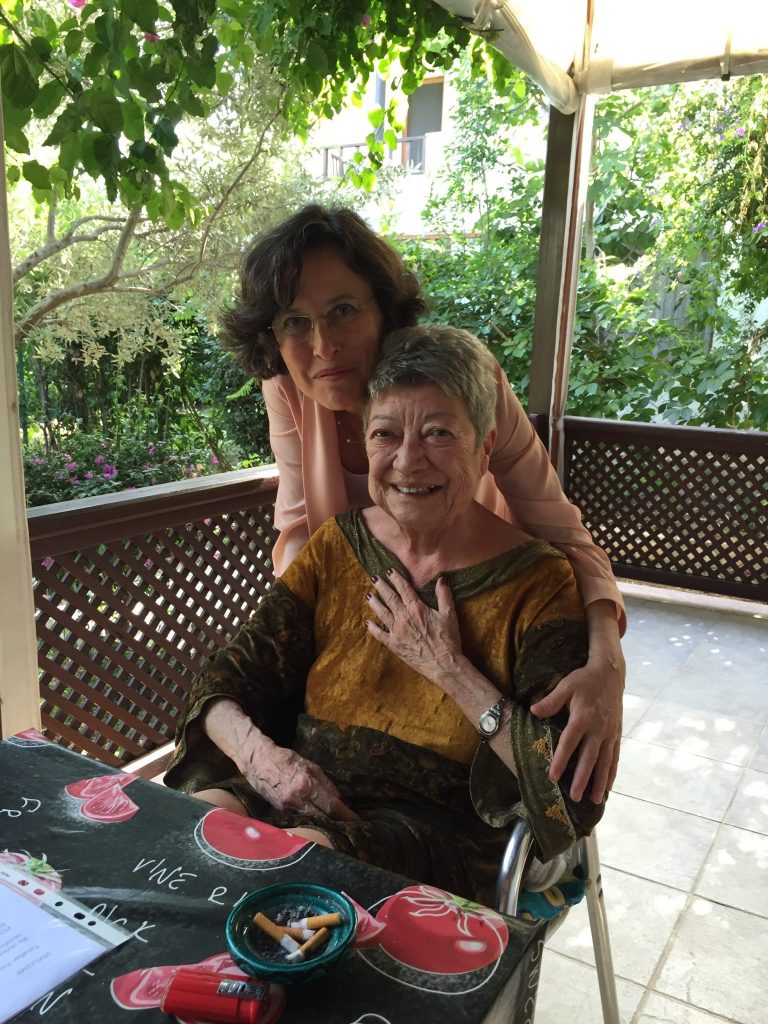 Prior to co-founding Mor Çatı Women’s Shelter Foundation, we organized the “Campaign Against Battering of Women”. I still vividly remember her coming to the march at Yoğurtçu Park in Istanbul, colorful placard −which was made by her own hands− that has flowers around the edges saying, “Stop Pressuring Women”.

Şirin also translated 25 books −most of which are about women and democracy− into Turkish. Her last book was titled “Thinking About Feminism”.

As I said she was an erudite, she really was! Whereas money was an object she could easily share, she never needed much of it, ever.

The last thing we co-founded was “Şirin-Ahmet Tekeli Foundation for Supporting Women Lawyers” (KAHUDEV). And thanks to her, dozens of women lawyers receive scholarships every year. The foundation is also named after her husband Ahmet Tekeli with whom she has met in Lozan and got married; it is our most precious treasure; the one we will sustain as long as we live… As she summarizes in her own on words on the foundation’s website:

“…We, Ahmet and I did not agree on everything: politics divided us a lot; he liked football, I liked opera… etc. However, there were issues that we shared and venerated both: law, justice, and women’s equal rights in every field.

This explains why after his death in November 2010, I decided to create a foundation with the money he left, dedicated to support women lawyers (students, assistant lawyers, researchers working on women’s issues…etc.) We will support them with grants and scholarships…”

My dear friend, to whom I kept saying “Oh, please let’s not talk about your will”, donated her estate to women’s organizations, foundations, and her body to science.

Happy birthday, we’re so glad that you’ve enlightened our paths.

Women in purple will never forget you…

*(This excerpt is taken from Şirin Tekeli’s interview with Esen Özdemir, published on 5harfliler.com on 30 June 2020).

This text is written to be published in the March Issue of Güncel Hukuk Dergisi [Contemporary Law Journal] and is published here by courtesy of the journal.

[1] Here, the author is referring to Şebnem Korur Fincancı who was the Forensic Science Department Chair at the time. She is currently the Chair of the Turkish Medical Association.

In the shadow of obligations: Family planning and abortion