Domestic labor and caretaking becomes a primary concern in countries where the welfare state is being dismantled, while women’s participation in the workforce remains crucial. 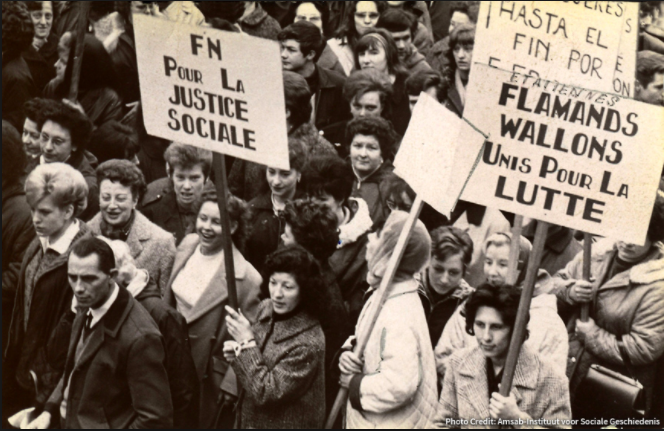 Written and directed by Chantal Akerman, Jeanne Dielman, 23 Quai du Commerce, 1080 Bruxelles follows the life of a middle class “housewife” in Belgium during 1970s over three consecutive days. In the movie, which is almost shot in real time −excluding the sleeping time− we watch the ceaseless daily routines of Jeanne who is in her 40s. These routines are portrayed through detailed descriptions of a woman’s repetitive, prosaic life cycle. Plates are put on the table; later they are taken away; lights are switched on and off, clothes are prepared, put in the wardrobe; jackets are held; shoes are shined; potatoes are peeled; sex is had; baths are taken, and lights are turned on and off absolutely each and every time. Even though the movie holds a surprise ending for the patient audience, it makes us focus on the dullness of domestic work which can drive one insane, for three hours.

The movie was shot in 1975, and that was the year when “National Labour Council” in Belgium constituted by the representatives of workers and employers was about to sign the collective labor agreement on “equal pay” for the first time. This agreement was important in terms of its influence on women’s lives at national level, however the timing wasn’t coincidental. Around 3000 women working at an arms factory titled FN Herstal in Belgium went on strike for three months demanding equal pay, nine years prior to this agreement. Women initiated the strike by blocking all of the production equipment; and the strike spreaded across the streets of Herstal. Even though the unions refrained from participating at first, they couldn’t help but support the strike after women succeeded to sustain the resistance for 12 weeks and gained public attention. The strike ended on a successful note; women workers’ demands were partially met, and their wages were increased. Herstal strike was a milestone in many aspects; it paved the way for “equal pay” to be an institutional demand and for unions to reevaluate their policies regarding women workers[1].

Women’s −who participate in paid labor market− strikes in factories were conducive to new accomplishments for women throughout the 19th and 20th centuries. Women initially struggled to be included in the labor market, then to remain in it and to be treated equally. Women working at cotton factories, weaving and shoemaking workshops, in mining, education, logistics and healthcare occupied workplaces and streets to demand the reduction of their working hours, amelioration of their work environments and primarily to be subjected to “equal” conditions with men, primarily in terms of wages. United Tailoresses of New York, the first women’s union founded in 1825 in New York, mobilized the women workers working in textiles and clothing industry who were perpetually overlooked by the existing unions. The union organized a strike with over 1600 women in 1831 and called attention to the worthlessness of women’s labor in factories through the slogan “a just price for our labor” at only the first half of the century[2]. The women workers (Mill Girls – also referred to as Factory Girls) working at Lowell Cotton Factory in Massachusetts resisted salary deductions a few years later and their struggle became a precursor to the upcoming waves of strikes in the next few years. The women working in logistics in London went on strike for low wages in 1918, their sisters working in Ford’s factory at Dagenham followed their steps in 1968. The Dagenham strike procured the Equal Pay Act to be passed by the Parliament in 1970 in the United Kingdom. Strikes didn’t only take place in countries that had already gone through the industrial revolution. In a strike organized by 50 women –who were members of the Greek and Armenian communities–, hundreds of women working in Fez Factories walked to the Sublime Porte in Istanbul to submit a petition to the Grand Vizier demanding their overdue wages in 1876[3]. Prior to this, another women’s strike took place in 1839 in Plevne, part of the Ottoman territory; women workers experiencing anxiety over losing their jobs revolted against mechanization[4].

Obviously, the history of women’s strikes is much more expansive than the examples mentioned above from a limited number of places and contexts. The industrial revolution rendered factories commons where masses unite, but also underscored the boundaries between factories and homes. Women were only able to negotiate their paid labor while working double shifts at home and factories. The argument that what is public is political and what is political can be resisted was to be refuted by second wave feminism.

From factories to homes

Second wave feminism revealed the exploitation of women’s labor and bodies in private spheres during the 60s and 70s, and that was when women’s demands for rights and control over their paid labor in the public sphere were partially met. Even though the progress differed according to context, women’s participation in the labor force increased considerably and their work fields diversified. Legal regulations were updated; even though rights to succession, work, equal pay and childcare support sometimes remained on paper and they were put into practice in a limited number of countries; they started to be included in –national and international– legislations. Meanwhile, the vast majority of women’s employment fields were still makeshift, precarious, and compatible with their families across the world.

For the women participating in the paid labor market, the benefits of the welfare state such as the provision of services for child and elderly care to a certain extent –which confine women to home– are instrumental. Governments’ social policies do not directly or radically change the domestic division of labor. However, the economic and social benefits which empower women against the patriarchy are conducive to the reconfiguration of private space through social policies.

Furthermore, domestic labor and caretaking becomes a primary concern in countries where the welfare state is being dismantled, while women’s participation in the workforce remains crucial.Elder members of the family, parents and other women in their extended families lend a hand to working women. The institution of family turns into an intrinsic economic cycle where the elderly provide care for the newborns and later the newborns provide care for the elderly. As the families become smaller and meeting other family members becomes difficult within urban life, homes turn into “workplaces”. Then it starts to include a “worker” providing his/her labor at a cost. These workers are also women, working for women employers.

While the neoliberal policies were restructuring the distribution of resources in favor of the accumulation of capital; they also collectively transformed not only the division of labor between men and women, but also between women and women. Paid domestic laborers providing domestic work and care services which were only available to upper class nuclear families, started to be common among middle class families. Consequently, this formed a new and prevalent domestic labor regime in which paid and unpaid labor coexist.

And perhaps one of the questions we’ve been dazzled by for a while is: how are we to build sisterhood to stand against patriarchy, while the neoliberal division of labor positions us against one another within the domestic space? If Jeanne’s overwhelming life is being assigned to another woman, how are we going to get out of this vicious circle? Perhaps, looking at the changing, evolving definition of women’s strikes today can create a fruitful ground to answer these questions.

The politics of the private sphere requires us to root for both paid and unpaid labor within the domestic space, and to build new relationships among women to develop new political strategies. We find the ground for organizing and acting collectively in factories and workplaces, however when it comes to domestic labor –and of course when it comes to love, desire, sex– we turn into independent subjects, acting and making decisions by ourselves; and we need to change this. Every relationship is susceptible to arbitrary breaches unless we determine its terms.

Employing regulated relationships as a basis for paid domestic labor and relationships themselves –as if negotiating an overall discount– can resolve this issue. Providing benefits for the paid labor such as making contracts for all domestic workers -immigrant or not, full time or part time-, ensuring the parties involved, introducing benefit obligations, determining work hours, securing rest hours, social security registration can render the domestic space public and empower our sisterhood.

Women’s strikes gained strength because they were perceived as threats targeting the employers throughout the 18th and 19th centuries. They enabled the formulation of new rules to be put into practice and institutionalized. Can we constitute a real threat for the subjects we’re resisting on the streets today, if we were to organize a so-called “strike” with the same will power? Will this threat manifest itself through any radical change in women’s private lives? We will see this over time. But for now, we can consider the union support for these new models of strikes –which stem from women’s resistance against the patriarchy and not just their labor but their entire beings turned into commodities and oppressed– are being supported by the unions in some countries as a silver lining.

[5] ITUC – IDWF – ILO – GAP Action Guide for Unions and Domestic Workers on How To Lobby or Convention, 2015, Available at: https://www.ituc-csi.org/IMG/pdf/itucdomesticworkersunite-final-en-final_digital.pdf (Access: 01.02.2018).