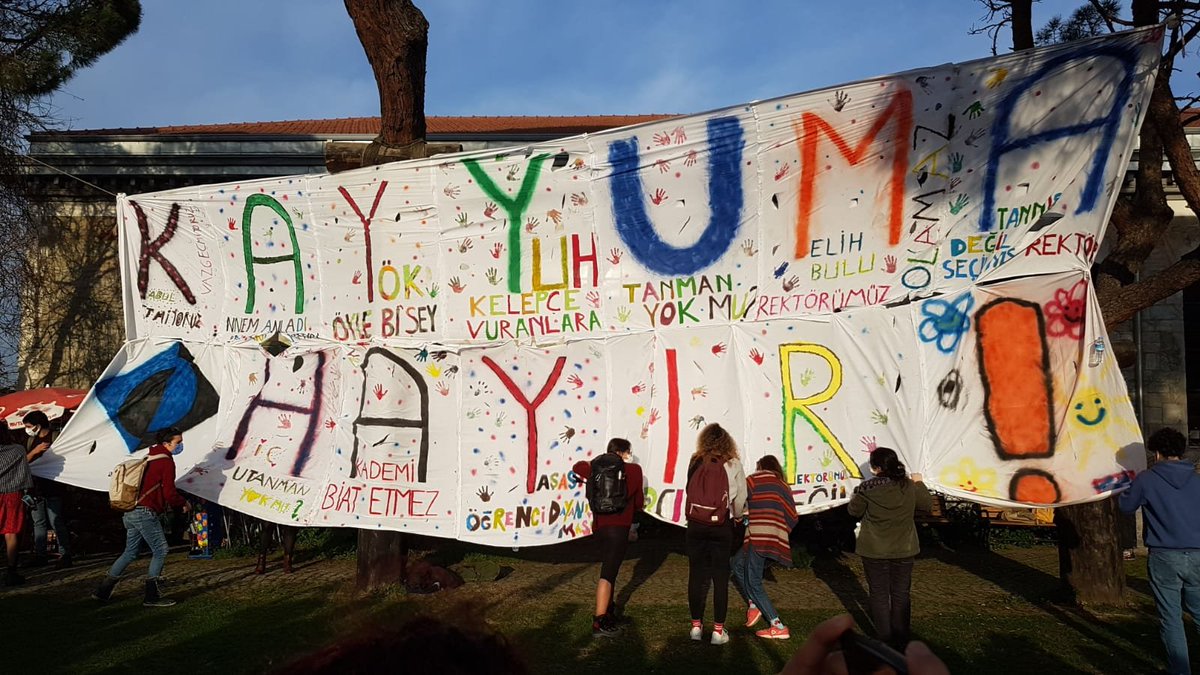 Cemre: The protests have been going on for over a month now. Would you please tell us what has been done so far and what do you find meaningful in all this?

İmge: Our protests began with a very basic democratic demand and continued that way. This is a demand for universities and academies to be autonomous and to have a say in their own administration. The protests, of which we have been a part both inside and outside the university since the day the trustee rector was appointed, have all been peaceful and we participated in these protests in accordance with our democratic rights. From where I stand, I think that our struggle to defend our life spaces is very important. We are motivated to have a say in the university where we live, attend lectures, and continue our club activities as well as to prevent any harm being inflicted to these spaces. However, it is necessary not to limit this resistance to Boğaziçi University, for sure. The appointment of rectors to universities has been an ongoing situation for many universities. Indeed, Melih Bulu is not the first trustee rector of Boğaziçi University. In this sense, I think that student solidarity plays a very important role in the protests against the appointed-rector and is very visible. I also think that the protests of academics who turned their backs to the “appointed-trustee-rector” has also echoed in the public. During Boğaziçi resistance, as students, we have organized many different activities. I think that this is related to the student clubs’ culture that has existed in Boğaziçi University for so many years now. From short skits to songs, meditations to marches, banner workshops to roasting halvahs, from open courses to exhibitions… An artwork in an exhibition organized by students who took the initiative to organize this activity has become the subject of public discussions. If it remained only as a subject of discussions, I guess this artwork would have fulfilled its function. However, as a result of incredible targeting and misinformation that has been serviced to the public by the government officials LGBTI+ students and particularly BÜLGBTİ+ have been declared the “culprits of the protests”. However, we were all in those spaces and as LGBTİ+ people, just as we are everywhere, we were at the protests. One of the points that I find valuable in this process was that since the beginning of the protests, the reactions against the rainbow flags which gradually evolved into an anti-LGBTI+ stance were countered by greater number of people and we got support from many people and institutions in this regard.

Cemre: We all know what happened to BÜKAK and BÜLGBTİ+. What do you think as a BÜKAK member? How will you continue your club activities?

İmge: It all started with a lawless and irregular search of our club room. We plan to exhaust all the channels within the university and within law. The investigation is not pursued over BÜKAK, but we try to conduct this process in solidarity with BÜLGBTİ+. Additionally, one of the democratic institutions in our university is KAK. In KAK, we stand together as members of many different clubs against the targeting and lawless procedures. However, our entrance into our club room is blocked by the rector. We were having an online semester and we have managed to adopt our activities to this online form; however, arbitrary obstruction of our access to our club room is unacceptable. We are of course having difficulties in continuing our work under these conditions and this agenda, but we try to keep communicating as much as we can, to preserve our spaces, and to continue our discussions and activities. We have already started the preparations for the 8th of March as well as the bulletin that we publish twice a year. I hope that our protests will end with gains and the work that we engage in during this period will be informed by these protests.

Ege: Our protests essentially started against an anti-democratic appointment. Faculty members, students, graduates, and workers supported and participated in these protests. Each group determined their own actions. The faculty, besides continuing their own actions with a great determination, agreed to take part in a joint action and refused to work with the rector altogether. Students organized various ways of protests. They made calls to meet outside the campus, and they also held classes inside the university. Professors from abroad were invited to hold open lectures with them. The support text published in the first weeks of the protests was opened to signature internationally and supported by names such as Butler and Chomsky. LGBTI+ people on the other hand, actively participated in the protests to emphasize their political subjectivity, and by bringing their own voices, they discussed both the anti-democratic foundations of trustee appointments and explained why it cannot be acceptable on the part of LGBTI+ people. The government must have been disturbed by this, so it tried to attribute these protests to the LGBTI+ people and to criminalize them and us hoping that these protests will lose legitimacy. However, I think there is an extremely hopeful picture here. Muslim students also wrote a statement, departments are writing their statements one after another. In other words, no matter how hard the government tries to destroy the legitimacy of our struggle by creating a dichotomy and picking out LGBTI+ people as the enemy against itself, it is not working. We transcended the dichotomous discourses within which they try to corner us, and we continued and will continue our struggle.

Cemre: As a member of BÜLGBTİ+ for a long time, what do you think about the fact that the club was shut down?

Ege: Of course, it is unacceptable. BÜLGBTİ+ and BÜKAK penned a joint statement about what happened. The entire process was handled in an extremely manipulative way. Afterwards, ÖFKK (Student Activities Coordination Board) and CİTÖK (Sexual Harassment Prevention Office) made statements about the shutdown of the club. Faculty, student clubs, institutions and students of Boğaziçi University all stood behind the club. I can say that looking from where we are now, I feel the power of change. All the reactionary efforts against the political subjectivity of LGBTI+ people backfired. There was great support from outside the Boğaziçi University, and despite all their efforts neither the criminalization attempts were successful, nor the legitimate ground for action was shaken. From the moment I started the university, this club has contributed to me a lot, maybe more than the classes. It was actually a home to me in a sense. My thoughts developed with the people I met there, my views changed there. I learned both to take a critical stance towards the world and myself. It was at the club that I learned that I could act together with other people. And one of the things that is most dear to me was the support messages. One day everyone used the hashtag #lgbtirightsarehumanrights, and the next day we, altogether, said #weareseymaswitnesses to combat misinformation. Our words are not produced within the confines of political polarization created by the government. We utter words that are inclusive of everyone who transcends this duality. And I think, they are actually afraid of this, that we can all communicate with each other, that we can end the polarization. That is, they are afraid of both change and the ideal of a different world.

Cemre: Can you tell us about the KAK tradition/rule of the university? What happens when KAK does not function?

Deniz: KAK is a platform bringing together all the students club of Boğaziçi University. Student activities at our university are subject to the ÖFKK (Student Activities Coordination Board) and the ÖİD (Dean of Student) . KAK is an inter-student board that is bound by the regulations of ÖFKK. Weekly KAK meetings take place with the participation of at least one representative of each student club within this board. Representatives of the seven clubs which received the highest number of votes as a result of elections held in the general assembly at the end of each year comprise the executive committee of the Board. Any agenda regarding clubs and student activities is presented to KAK by club representatives before being put on the agenda of other boards and the dean’s office that I mentioned above. KAK is not a decision-making authority, it can only express an opinion or offer a proposal regarding the issue at hand. Therefore, the failure of the operation of KAK causes the absence of a platform where students can convey their opinions.

Cemre: KAK issued a statement with the signatures of 43 out of 45 KAK members. Can you tell us about the process, what were the demands, how could it get such great support?

Deniz: There are 44 clubs in the university. 41 of them signed the statement. Two clubs became signatories. In total 43 student clubs signed this statement. On the morning of January 30, we learned from the governor’s office that a club room shared by two student clubs was raided and searched by the police. Clubs contacted the KAK Executive Committee and asked what could be done both about this incident and about the hate speech against BÜLGBTİ+ and against LGBTI+ people in general. We had a meeting. In the meeting we talked about the fact that club rooms were our working spaces and that there was an effort to criminalize these areas. Also, the BÜKAK-BÜLGBTİ+ joint club room and the club room of GSK (Fine Arts Club) were searched on the grounds of an exhibition that they did not organize. All KAK members knew that neither club had organized the exhibition, because the event permissions are addressed at the KAK first. In addition, the ethical principles of our school, to which student clubs are also affiliated, obliged us to raise our voices against the hate speech against LGBTI+ people through BÜLGBTİ+.

Club representatives decided to write a statement to raise a voice against the unlawful searches of our club rooms and hate speech against LGBTI+ people as well as to inform the public correctly. The fact that our club rooms where we can easily enter, and work were suddenly presented as a crime scene and that BÜLGBTİ+ was targeted only because there are LGBTI+ club members were the points that we wanted to speak against. I think that’s why the declaration received such extensive support. Besides, these slanders targeting both the club rooms and LGBTI+ people were an intervention in our living spaces, and these problems pushed us to unite and to be in solidarity.

Deniz: After we drafted the statement, BÜLGBTİ+ was unlawfully closed. For example, we discussed this issue at the KAK meeting and discussed what we, the student clubs, could do. I find KAK important because it is a discussion platform for students and the procedures are handled in a democratic fashion. I find it valuable that the democratic entities established by the students produce discourses and object to the ongoing and future anti-democratic practices that started with the anti-democratic rector appointment.

“I have to feel up to come next year”: 9th Boğaziçi University Pride Parade