Boğaziçi University Sexual Harassment Prevention Office (CİTÖK) which has been active since 2012 has been frozen last week after the coordinator of the office has been forced to take unpaid leave. We have conversed with Cemre Baytok, who has been working as the coordinator of CİTÖK since 2016, about the history of CİTÖK, its contribution to the struggle against gender inequality, the current situation. 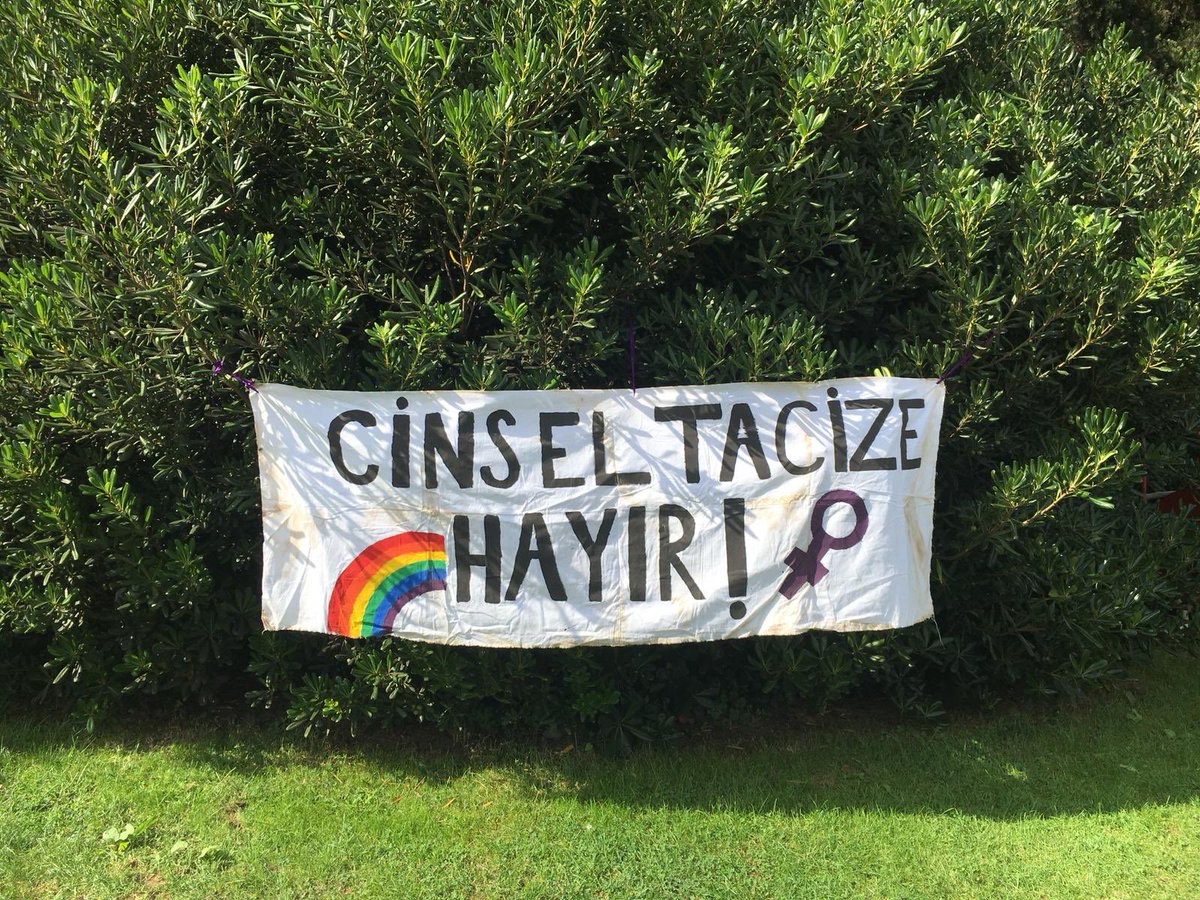 When was CİTÖK established? What was the rationale behind its establishment? What kind of difference did CİTÖK effect with respect to fight against sexual violence and the people who applied to the office?

CİTÖK was established in 2012 with the contribution of academics and students who work in the field of gender equality. Besides the academics and administrative personnel, student representatives also took active roles in the office. In 2016, when Gülay Barbarosoğlu was the rector of the university, a coordinator started working at the office and a room was allocated to the office. I have been working as the CİTÖK coordinator during the past five years and I had one-to-one interviews with almost 400 people –most of these people were students. Before the establishment of the office, the number of people who applied to CİTÖK was one tenth of this. The existence of an office and the fact that it became operative won people’s confidence; and during this period, the office became an accessible consultation and guidance unit. I have been invited to give presentations and training, since the beginning of my post, but particularly at an accelerated pace during the last two years at various institutions outside the Boğaziçi University. In others words, various institutions and structures of the civil society have paced up the works they carry out to establish these kinds of units and prepare documents and regulations of gender equality. Two years ago, these kinds of works were not this pervasive.

How did CİTÖK contribute to the establishment and formation of similar offices, commissions, and units in other universities? In other words, how was the common line of struggle established with these units?

Many universities in Turkey have sexual harassment offices, commissions, and units. For years, these units have been sharing their experiences with each other in a group called the “Intercollegiate Communication Network Against Sexual Harassment and Assault” (CTS). The units are in coordination with each other. CİTÖK is also a part of this network. The fact that CİTÖK had a coordinator who was responsible for running activities to prevent gender inequality and who did not hold any other position in the university, set a unique example to other institutions in the country. Many other universities who wanted to found similar units invited CİTÖK for meetings and those units were established.

Could you please talk a bit about the process that led to the de facto shutdown of the CİTÖK through the method of “unpaid leave”?

Since the ban on dismissal of employees is de jure in place, the administration had to decide on one of the two options: they were either going to keep the employee and pay the employee’s salary or they were going to impose unpaid leave on the employee. The administration opted for the second option. I am the only employee of the office. Since nothing has been said about whether this situation is temporary or not, in other words, since no guarantees are afforded, this situation means that the office is de facto shutdown. During the term of the previous rector, although it was communicated to the administration that a more institutional, systematic, and sustainable office structure was needed and that the position of the CİTÖK coordinator is insecure, no action was taken. Therefore, the office was destroyed in the “first coup”.

At this stage, I think that the commission will continue its work and given that the office is de facto shutdown, the commission will probably keep working with the support of the students who want this kind of work to continue. First of all, it is clear that the presence of the office is utterly functional for students. Of course, the widely accepted principle of ensuring gender equality in institutions and in the academy which is itself the product of years of efforts and experiences will not suddenly disappear with the shutdown of the office. However, the coordinator occupies the position not only of someone who directs applications but also carries out consulting and training works. The absence of an office will create a deficiency in this respect. For instance, for the past three years, students who are in their prep year, during the orientation period, had been listening to two introductory presentations on university life offered by CİTÖK and were attending compulsory courses in the following months. Together with the institutions outside the university, we tried to eliminate the deficiencies in the access of the young generation to information, to provide information they need –particularly on sexual health and to establish a mechanism which they can refer to even if they only want to get consultation. I believe that, having this experience, the commission and Boğaziçi University will reopen the office.

One of the first actions of the rector who was appointed as a trustee was to close BÜLGBTİ+ and to put a lock on the door of the club room that they share with BÜKAK. Now, a decision has been taken that would render dysfunctional the commission of which these two student clubs are a member. What kind of a picture does this paint in terms of the rector’s priorities?

It is not possible to think about these developments independently of the course of developments in the country. We are going through a period that the concept of gender is feared. On top of that, we experienced, during the term of the previous rector, that this office provides one of the biggest contributions to the university when it comes to compliance with international standards and inclusion in the relevant lists. In other words, we are not just talking about developments that would contribute to increase in gender equality. The shutdown of the office will have negative repercussions for the Boğaziçi University in terms of the international academic standards. For the past three months, we see that the democratic and egalitarian principles of the university have been receding into the background with Melih Bulu. CİTÖK was an organic outcome of the established culture. Its loss points at a symbolic and concrete reality of how the future of the university is being imagined.

When we take a look at the agenda of the country, we see an effort to erase the emphasis on gender equality in the activities carried out by the municipalities, universities, and NGOS. Especially in a context of withdrawal from the Istanbul Convention, what does such a decision mean?

As I have said, this is not something independent of the general trend. We are in a period of efforts to prevent one by one the mechanisms for gender equality. It was a turning point in 2019 when YÖK removed from its website the “Gender Equality Attitude Certificate” which it sent to the universities in 2016. The decision to withdraw from the Istanbul Convention can be considered as the last step taken because according to the Istanbul Convention’s vision openly states the principle of mobilizing various institutions to organize trainings and to support these kinds of works in the fight against discrimination and inequality. CİTÖK and these kinds of units at the universities constitute examples of this principle. It is obvious that combatting discrimination, inequality, and violence is not wanted.

How do you think the struggle will continue from now on?

Today the topic of preventing gender inequality and establishing and functionalizing mechanisms pertaining to sexual harassment and related acts is widely discussed in civil society and some public institutions. People are increasingly sharing knowledge and their experiences. The shutdown of the office, just like other similar developments, is sad and wearisome. However, it is no longer possible, in 2021, to shut down this field of struggle. I think the struggle will go on with new mechanisms and efforts.