“The methods of struggle brought by the oppression periods may be different, but why can’t movements that have experience of waging a struggle by forming coalitions organize about the demand for peace even when there is no official process?” 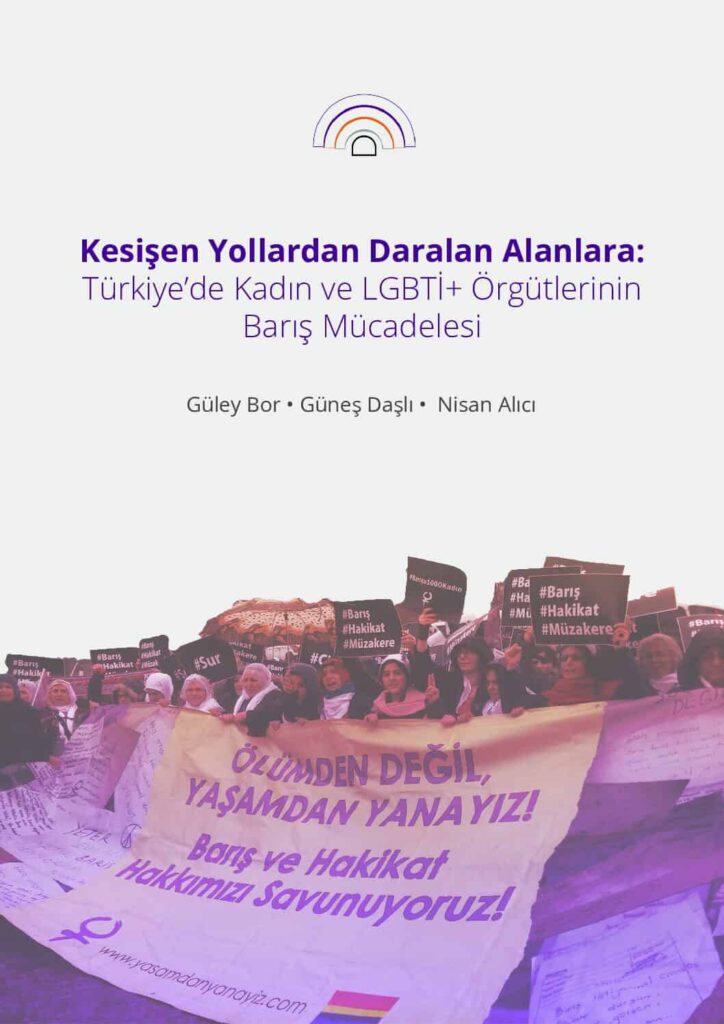 Güley Bor, Güneş Daşlı and Nisan Alıcı from Research Association for Democracy, Peace and Alternative Politics (DEMOS) published a report titled From Converging Roads to Narrowing Grounds: The Struggle for Peace by LGBTI+ and Women’s Organizations in Turkey. Almost seven years have passed since the end of the process, which gave hope for a democratic solution to the Kurdish issue, in the summer of 2015, and the armed conflict restarted violently. By means of this report, remembering the 2013-2015 period and looking at that period through women and LGBTI+ organizations make us think about the meaning and limits of these official processes from a gender perspective, as well as the possibility and necessity of a peace policy that goes beyond official processes. We talked to Güley and Nisan, who are two of the authors of the report.

We are aware of the efforts of DEMOS and also your personal efforts at DEMOS to look at peace from a gendered perspective, and we follow it with interest. As you said in this report, you are already active women in the peace movement and the LGBTI+ movement. There is some answer to this in the report, but I would like to ask you to explain in more detail, why did you choose to look at women and LGBTI+s together?

Let’s start by thanking Özlem for the questions and Çatlak Zemin for hosting us. One of the principles that DEMOS applies to all of its work is to have an inclusive gender perspective. We do not consider gender as a separate field of study, but as a main axis that crosses our four fields of study (peace and reconciliation, transitional justice, collective memory and conflict transformation). This is a principle we have adopted since the day we were founded in 2015, but we can say that it has transformed over time. This transformation is the result of our questioning of the acceptance the issue as gender=(non-trans hetero) woman , which is also prevalent in peace and transitional justice studies. While patriarchy is so intertwined with heteronormativity/forced heterosexuality and gender duality, the feminist methodology we have adopted requires a critical approach to this acceptance. At the same time, it is essential for knowledge production in peace studies to look at the interactions of various domination ideologies such as militarism, racism, and nationalism with each other and with sexism/LGBTI+phobia.

You make us remember how active women’s organizations were in their demands and activities in the part where you listed the activities and achievements in the solution process.[1] From the involvement of women at the negotiating table to the different methods of expressing the demand for peace, to being a third party. What can this experience teach us for periods when official processes are not carried out?

This is a very interesting question and one that we need to think about. Maybe we can start thinking about it from here. We also mentioned the continuity of violence for LGBTI+s and women in the report, that is, periods of non-conflict are not free from violence. In the solution process, of course, the social and political conditions were very different, there was a certain freedom environment, at least the opportunity to wage a visible peace struggle. But there was also a patriarchal politics space that was fought against at the same time. To put it simply, let’s recall the debates about the transition from the committee of wise men[2] to the committee of wise people. In other words, the fact that the activities in that period were so rich was of course under favour of a very concrete framework such as the ongoing solution process negotiations. But for example, if we remember the activities of the Women’s Freedom Assembly, the inclusion of Ceylan Bağrıyanık in the negotiation committee as the common representative of the women’s movement, etc., we will see that the gains of that period were also achieved through long struggles. This, of course, is based on an accumulation that precedes the solution process. On the one hand, this also shows that the various methods of struggle you mentioned in the question can take different forms even when there are no official processes. The methods of struggle brought by the oppression periods may be different, but why can’t movements that have experience of waging a struggle by forming coalitions organize about the demand for peace even when there is no official process? Compared to the solution process, the issue of coming together and collaborating in the struggle, which is currently referred to as missing, seems to be the key issue here. We discussed the details in the report, we do not want to repeat them here, but we know that as a result of the increasingly authoritarian regime and the shrinking civilian space, the movements have turned in upon themselves and their contact areas have decreased a lot. I think that to overcome this and while trying to overcome this, discussing how the demand for peace can unite these movements may be the first step to see what can be done when there is no official process.

On the other hand, you also say that these activities are more limited in the LGBTI+ movement. What do you think is the main reason for this?

This is an important question, but we do not have any findings in the report as to why the LGBTI+ movement does not carry out more peace work towards the solution process. In the history of the LGBTI+ movement, there is close contact and many partnerships with anti-militarist, conscientious objection movements. In the report, we drew attention to the similarity of the concept of “social peace” that the movement embraced and frequently mentioned with Galtung’s concept of “positive peace” (positive peace indicates both the end of conflict and the elimination of inequalities that cause violence). Last December, we had the chance to present the report at the “Peace Struggle and LGBTI+ Movement in Turkey” event organized by SPoD and then listen to the forum the participants from LGBTI+ organizations took place. Friends who were involved in the movement, including during the solution process, shared the work of that period, and we included a significant part of it in the report (thanks to the Kaos GL archive).

Although the efforts to influence the official negotiations are limited, there are various peace works carried out by LGBTI+ organizations and activists while the solution process continues and after it has officially ended. These works are aimed at raising the word of the lubunyas[3] in the broad peace struggle as well as spreading the demand for peace among the lubunyas. On the other hand, we can also note that the founding declaration of the LGBTI Peace Initiative, the first LGBTI+ organization allocated to peace, published in August 2015, shortly after the solution process ended, included self-criticism for not contributing enough to the peace struggle during the solution process. Maybe if the solution process had continued, LGBTI+ organizations would have included influencing the negotiations on their agenda. In short, I wish there was research allocated to the peace struggle of the LGBTI+ movement, and it would paint a holistic picture of the history of the struggle. Our research has examined only a limited period of this struggle.

As you said at the end of the report, this is an effort to refresh the memory. What surprised you the most from what the research reminded you and what the interviews revealed?

One of the things that surprised and made us think the most was this memory issue itself. A significant part of the participants gave a lot of reference to remembering and forgetting while talking about their work during the solution process or shortly after it. This was a point we emphasized in the report as well. We witnessed that our participants had difficulty remembering many things that happened a few years ago or were surprised that they actually happened very recently. An important reason for this is that the peace agenda seems to have been walked all over. The criminalization of the peace struggle and the compulsory change of strategy in the face of attacks on fundamental rights and freedoms is another reason here. In recent years, peace efforts have not only decreased, but the demand for peace has also become quiet, indistinct, and inaudible, almost as if it is not one of Turkey’s needs. To crown it all, when the fact that those who fought for peace at that time had to deal with different urgent agendas in recent years, the memory of peace weakened considerably. It was interesting to see, but also a little sad. But if we look from a somewhat hopeful perspective, we can see that remembering these and talking together was good for both us and the participants. At least, that’s what we were told. As two of the researchers (Güneş and Nisan) we were also people who took part in that period and followed closely, so the interviews sometimes also served to activate our deep collective memory with the participant. And as you talk and think about it, it is actually possible to establish many new connections. Making sense of the period when the peace struggle was very active helps us to make inferences for the future. But I think the more important thing is that it helps us to remember that getting together strongly is possible and that there is an accumulation of struggle that has extended over a very long time even if we don’t always remember it, and it helps us to take strength from there. This may be motivating for new partnerships.

[2] During the solution process, a committee was formed, which included some famous/reputable names, considering that it would contribute to the execution of the process. (Translator’s note)

[3] Lubunya is defined as “Initially referring to feminine gay men and trans women in queer slang (Lubunca) in Turkey, lubunya has come to refer to a wide range of sexual orientations and gender identities in recent years. It can be loosely translated as queer,” in the report of DEMOS titled “From Converging Roads to Narrowing Grounds: The Struggle for Peace by LGBTI+ and Women’s Organizations in Turkey” (Page 6).

Our existence is resistance: Hayriye Kara of KAOS GL tells the significance of the Istanbul Convention