It seems to me that feminist utopia can only be intuitive, since the feminist movement is not a social project that adapts itself to a predetermined telos; it does not consist of coherent stops that follows a sequence; with no guarantee it will eventually succeed. 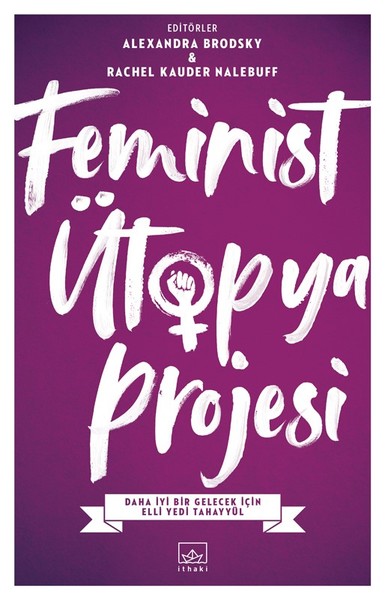 The first ever feminist utopia I have read was Herland by Charlotte P. Gilman[1]. I had found it boring back in the day. Partially because I was young and a know-it-all, partially due to the fact that my literary review of the novel found it lacking adequate suspense. At the end of the day, I thought of it as the story of an unknown land where only the women and children are living happily. Years later, I became aware of the significance of Herland when I started focusing on utopias from a feminist perspective.

The last utopia I have read is an anthology edited by Alexandra Brodsky and Rachel Kauder Nalebuff, titled The Feminist Utopia Project: 57 Visions of a Wildly Better Future[2].  It is an anthology that brings together the essays, poetry, stories, drawing, photographs and interviews of fifty-seven feminists of different age, race, vocational, sexual identity backgrounds.  This rainbow colored, sparkling volume joins a wide array of imaginations spanning from “What Will Children Play with in Utopia: Or: What Is the Opposite of a Mirror?” to “Feminist Constitution”, from “The New Word Order” to “My Own Sound” penned by a deaf feminist, to “Equity Eats” and “Embroidering Revolution” focusing on a world where new works of art composed of handwork can be seen at home. There are also quite entertaining chapters like that of “Lesbo Island” and “A List of Thirty-Three Beautiful Things to Wear on Your Breasts”.  The backbone imaginations of the volume rest on plurality, body and sexual/gender identities.

It is impossible to agree with the imaginations presented in the anthology unless you are incredibly misogynist or homophobic, coupled with a big “but”. In my opinion, the most important shortcoming of the volume is that most of the imaginations presented in the book are content with negating the issues we are currently grappling with, rather than pointing out a possibility. I would like to explain this deficiency relating to the word “utopia” via using Ernst Bloch’s concepts.Bloch, in his grand work The Principle of Hope[3] expands the reaches of what “utopian” is and historicizes it. The utopian aspect, as suggested by Bloch, lies in the attitude adopted while doing something rather than what is being done, and in the consciousness that orients the action rather than the action itself. The utopian consciousness is built on the “principle of hope”, as Bloch defines it.

The principle of hope, which manifests itself in different fields from fairy tales to folk songs, from daydreams to street performances, from architecture to the experiments of alchemists, from astrology to myths, is intuiting the “not yet existing” (Noch-Nicht-Seins); that is the hope of what has not yet come true, that is not yet possible, or even that has not yet come to the level of consciousness as a desire or aspiration. It is a longing for the fulfillment of needs, which, when left unmet, turns into a kind of political unconscious. Standing somewhere between what can no longer be and what has not yet happened, the principle of hope itself is a part of the reality it aspires to change, even as it tries to eliminate its reasons for being necessary. It is therefore dynamic, contradictory and far from certain. The principle of hope is the driving force of creative and political energy, as it is based on the belief that a complete human and a completely better world is possible. And I think this commonality brings feminist utopia and the principle of hope together. It seems to me that feminist utopia can only be intuitive, since the feminist movement is not a social project that adapts itself to a predetermined telos; it does not consist of coherent stops that follows a sequence; with no guarantee it will eventually succeed. When I say intuitive, I mean a vision of a future that includes values such as freedom and equality, on which we rely while dreaming of a “better world”, “another world”. The intuition of what is possible, the intuition of the means by which life will be transformed for the better.

Again, in Bloch’s words, daydream, as the first step of art, tends towards betterment of the world and what is possible becomes visible thanks to art. The daydream that expands the world is also included in science. To paraphrase Bloch, after all, science too can go beyond superficial correlations only with foresight. This intuition may consist exclusively of so-called discoverer-like ‘assumptions’ that outline a picture of the whole issue without going into details.”[4] One of the reasons why I found Herland noteworthy is that I think Gilman wrote this book with this intuition. Gilman opposes the patriarchal society, which she sees as the cause of war, famine, diseases, and the exclusion of women from education, art and science, with another vision of society. The intuitive thing here is that in this utopia, written in 1915, 103 years ago, reproduction was conceived in a way that excludes men. Therefore, Gilman renders the possible visible, and discusses another possibility. Of course, it is not the condition on which relies a good utopia, but today it is known that women couples can give birth to children carrying their own genes without the need for sperm.[5] Probable problems, such as whether access to this technology will be democratic, whether the method will be used to produce chosen children, belong to the “here and now”, the time we live in, and is no longer about the utopia.

Most of the imaginations featured in Feminist Utopia Project relate to the era we live in, already labeled, even sloganized, included in the spheres of struggle that feminists occupy and far from the prophecy of art which point at the utopian future ahead, and what can be called demands rather than imagination of what is possible in another way. For example, see the following chapters: “Not on My Block: Envisioning a World without Street Harassment”, “An Unremarkable Bar on an Unremarkable Night”. Thousands of feminists in Turkey and in many other countries of the world come together and voice these demands. Feminists in Turkey have been organizing night marches under the slogan “nights are ours, so are the streets” for years now. Same critiques hold true for imaginations surrounding the body and identity. There is a repeated reference to with all our differences (regarding coexistence, being accepted etc.), which immediately makes the reader think that there will be a norm in utopias in terms of desire, body etc. The most obvious category we employ to define ourselves and others could be our sexual orientation in this moment and the world we inhabit (as labeled by different letters and abbreviations such as LGBTI+, cis etc.), but what about in our utopias? Borrowing from Sedgwick[6], Eve Kosofsky asks whether it’s not odd to imagine a world that is defined by the sex of the person one is attracted to despite all that accumulation of various queer experiences that point at “an open web of possibilities, gaps, overlaps, inconsistencies and mutual understandings, shifts of meaning, and more”?

I have to admit that I find some parts of Feminist Utopia Project too American and commonplace. By depicting a land without naturalization ceremonies for immigrants, the chapter titled “Description of a Video File from the Year 2067 to be Donated to the Municipal Archives from the Youth Voices Speech Competition” is a critique of these ceremonies in the USA. Or take this quote for example, “when menus were passed around she would know which dishes were gluten-free. She knew that the restaurant staff would take her gluten sensitivity seriously, and would consider any possible areas of cross-contamination in the kitchen”. The imagination at play in “Let Him Wear a Tutu” (126) deals with what is now such an ordinary subject that a singer like Celine Dion, who can be called the queen of mediocrity, can shoot a music video for the sake of it, and establish a company that produces “gender free” children’s clothes. Do you think the existence of these kinds of demands/texts has something to do with being feminist to be considered as a subset of political correctness and the fact that feminism has become more accepted in the recent years, especially in the US and Europe?

One of my favorite chapters in the volume (yes, there are chapters I liked) is “Working Utopia”. The author of the chapter deals with sex work, and instead of describing a utopia, she strives to leave “people the resources they need to realize the utopian vision of future” (203) and claims that history is one such resource to prove that you are not alone. According to her, another critical resource for the future is asking the questions that have not been asked before. She closes her article with the following question: “Though I act as if there is room for me, I accept that I won’t be around for utopia. If a politics of exclusion doesn’t ensure that, time passing guarantees it. So who will be here? Who are we building the future for?”

As stated in the introduction of the book, it is difficult to “dream big when we are constantly playing whack a mole with the patriarchy”. But when was the last time it was easy? As Alessa Johns underlines in “Feminism and Utopianism”[7], “centuries of utopian writing demonstrate how feminists time and time again have relied on utopia in order to posit a viable as opposed to an unattainable future”.

[5] https://www.birgun.net/haber-detay/kadinlar-20-yil-icinde-sperme-ihtiyac-duymadan-cocuk-dogurabilir-233329.html [News article in Turkish on how women will be able to conceive a child without any need for sperm in 20 years]

[6] Bennett, Andrew and Nicholas Royle, An Introduction to Literature, Criticism and Theory. Routledge, 2018