Debt turns into a prison that condemns women into houses and workplaces. 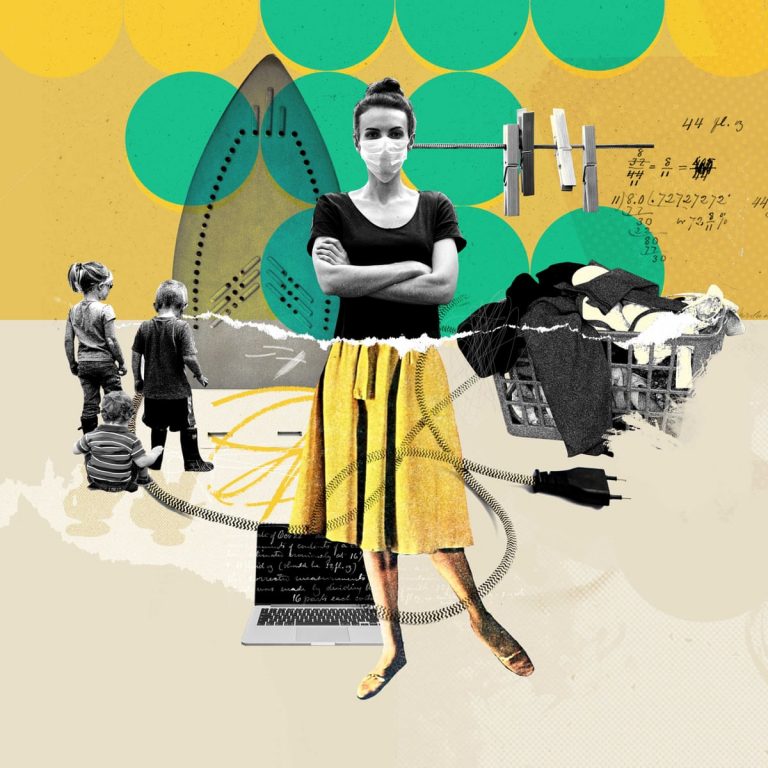 “I wouldn’t be too concerned even if I face foreclosure… Because this is a common thing nowadays. It is one of those things that everyone faces; it is a routine thing. I mean, everyone is indebted.” These are the words of a woman who is one of the 25 million people who have credit debts in Turkey. Unlike its commonness today, in the early 2000s, consumer loans and credit cards appealed to a very small segment of the population.

But what happened and indebtedness became “a routine thing”? Two main transformations are important here. The first one is the financialization process. Short-term capital investments, which is also known as hot money, became effective in the financialization of not only external debt but also loans. As a result of consumer loans which got cheaper and a series of institutional regulations, the household turned into the most attractive consumer base for banks. Credit expansion was also one of the keys to creating an artificial economic growth based on spending to balance domestic demand against the steady decline of real wages. The secret of “economic growth” records in AKP’s [Justice and Development Party] early years was also based on “spending”. The second and related transformation is the inequalities that drive households to banks. In fact, some scholars emphasize the political aspect of these processes and claim that the government has adopted an inequality management model based on social assistance programs on the one hand, and indebtment on the other in an effort to alleviate political risks.[1] Currently, indebtedness and precarious employment feed into each other, and this is yet another mechanism to ensure the control of the working class.[2]

Official data reveal the extent to which household indebtedness has reached in Turkey. The ratio of indebtedness based on household disposable income raised from 4.7% in 2002 to 55.2% in 2013, reaching its peak.[3] In the same year, groups with an income of 2000 Turkish Liras or less made up 60% of the indebted population and their share in the total debt amounted to 45%.[4] Of course, in a period when the foreign capital dependence has increased, interest intervention has become more difficult, and economic crises have gained a permanent character, a class politics that involves the strategy of indebtment is swiftly becoming unsustainable. In any case, what these two main transformations leave us with is the household debt burden which amounted to 800 billion TL during the pandemic.

Household indebtedness has often been an issue discussed outside the boundaries of the “house”. Based on my interviews with dozens of women from indebted households in Istanbul and Athens, in this piece, I set out to draw attention to the processes “inside” the indebted household. I will particularly focus on the context of Turkey as it points to a social structure in which indebtedness and gender-based inequalities are entangled in specific ways.[5] In Turkey, while 83% of men have bank accounts, only 54% of women have bank accounts.[6] These rates show that Turkey, among the 144 countries assessed within the scope of this survey, has the highest rate of gender-based financial access gap. More interestingly, 72% of women who do not have a bank account explain this fact saying, “someone else in the family has a bank account”.[7] It should not be too hard to assume that this “someone else in the family” is a man. Although women, especially “homemaker” women, are one of the most important targets of financial access action plans, efforts geared to that end do not yield the desired results due to the reasons we can guess.

How can we talk about women’s debt burden if almost half of them do not even have a bank account? At this point, we need to look at the indebted households from within the households. In doing so, we need to bring up social reproduction, an issue often emphasized by feminists. Social reproduction means total and continuous formation of the material and spiritual conditions of existence.[8] In other words, social reproduction is based on three fundamental processes: biological reproduction (including the social construction of motherhood), social reproduction of labor power (including resources and conditions of nutrition, education, healthcare, etc.), social reproduction of supply and care needs (including private and/or public services).[9] Recently, feminist authors point at the relationship between indebtedness and social reproduction and demonstrate that this relationship is a gendered one.[10] That is, with the precarization of labor and the weakening of welfare practices, social reproductive labor is transferred to women and the increasing cost of this burden is transferred to credit mechanisms. The situation mapped out here is the financialization of social reproduction on the one hand, and the increasing debt burden of women who are obliged to shoulder this burden on the other. For instance, studies focusing on the credit markets in western countries reveal that many women get loans for the basic needs of the family, are exposed to high interest rates while taking loans, and therefore face more risks such as income loss, poverty, and foreclosure.[11]

In the case of Turkey, the gendered relationship between indebtedness and social reproduction is manifested in peculiar ways. Recently, we have seen, in addition to the attempts for commodification of public services and flexibilization of the labor market, that family-oriented social policies which impose the burden of care work on women have gained momentum.[12] This neoliberal-conservative patriarchal regime adopted by the government continues to simultaneously push women both to flexible work and to dominant gender roles.[13] This, in turn, exacerbates the multilayered inequalities that hinder women from formal secure employment. Currently, only one third of women participate in the labor force, about 60% of those who are not in the labor force cannot participate in the labor force because they are occupied with house chores and care work; moreover, 40% of women employees work informally.[14] Additionally, my interviews show that women fall under indebtedness even though they are not personally in debt. For not only debt but also indebtedness is shaped by gender relations. While debt is used to cover the increasing cost of social reproduction, indebtedness requires a management for minimizing this cost and causes the burden of balancing the adverse effects caused by indebtedness in the family. That is, indebtedness requires a twofold “care” for the debts on the one hand, and the indebted family on the other. This care work usually consists of emotional labor that comes into play to make sure that the payment follow-ups and the monitoring of expenses, household saving strategies, informal works for contributing to the budget, overtime work, and the financial burden, will affect the family members less. As part of the maternal and conjugal roles attributed to them, women undertake some or all of the abovementioned workload, depending on the situation. Moreover, many women who cannot participate in formal labor because of domestic responsibilities engage in various informal jobs, including paid childcare in their homes or in their neighborhood and try to finish their debt installments. That is, loans taken to cover the cost of social reproduction are paid or tried to be paid, again, by social reproduction labor.

As I mentioned, the management of debt and the indebted household becomes part of the social reproduction labor, changing the content of this labor. In fact, it affects not only the content of social reproduction labor but also the division of labor. Under normal conditions, women manage money while men control it. That is, women can rarely have access to men’s income and are not usually included in the decision-making as to how this income will be used. However, with debt burden, financial responsibilities become heavier, bringing about the necessity to act faster and in a more planned fashion. In essence, the debt relationship is based on self-discipline of the indebted person and, thus, needs more disciplined and responsible subjects. Looking at it from within the indebted household, it becomes more difficult to manage and control money, and the need for a meticulous person to manage money increases. In cases where men are the only income-earner, women already undertake more managing work than usual. However, in cases where women are the only income-earner and men do not have a regular job, women assume both management and control. In other words, women can have a say in household monetary matters only when the “breadwinner” status of men is weakened. For example, a woman who earns minimum wage and whose husband does not have regular income tells the financial division of labor at home saying, “I take care of it, I decide, I think, I pay.” She adds, “the bank is my priority, when I get my salary the first thing that I do is to pay the bank installment.” That is, she could undertake the “care” and “responsibility” of both the debt and the indebted household after her husband has backed off. In fact, in such cases, the financial division of labor in the household shifts from male domination to a situation where women assume more roles. Of course, it is not possible to use concepts such as “empowerment” when explaining works imposed upon women in difficult times. What we need to pay attention here is the conditions under which the gender division of labor changes.

Increasing financial responsibilities and unequal distribution of these responsibilities come at a heavy price for women. Debt turns into a prison that condemns women to homes and workplaces. Debt payments require not only money but also time. These requirements, in turn, create a bodily domination. Almost all of the women I had interviews with mentioned problems such as stress, depression, anxiety disorder, and self-alienation. For instance, when I asked, “What have the debts affected most in your life?”, a woman replied “myself” and continued, “Sometimes I say to myself that, I am not a doctor, but I wonder if I am mentally well. Sometimes, for real, I go into the house and I don’t want to talk to anyone, I just sit down.” Another woman, who said that she constantly thought about the debts, told why she avoided social meetings: “I don’t want to go out because my mind is always busy with them [debts]. I do not understand anything, I feel like the crowd is coming over me. It feels like torture.” While expressing these, women were at the edge of crying and they were also relieved to share their feelings. Many women said that the interviews felt like “therapy”. Despite their emotional and bodily burden, women’s future expectations started with the statement “as soon as my debts are over…” and end with the sentences “there are lots of things to do; we cannot do anything with our salary if we do not take loans”.

[5] I discuss more in detail how women’s debt burden affects women’s participation in paid and unpaid labor and what kinds of experiences it causes in and through the familial roles in the following article: P. Kılınçarslan (2020) Gündelik Deneyimler Üzerinden Türkiye’de Kadın Emeği ve Borçluluk, Praksis, 53, 39-66.

[8] Social reproduction is a concept that feminists have focused on and discussed extensively. For current sources for theoretical and historical evaluations on the subject, see: M. Yaman (2020) Toplumsal Yeniden Üretim: Birleşik Bir “Feminist” Teori? Praksis, 53, 9-37. G. Acar Savran (2020) The Crisis of Care/Social Reproduction and Beyond

Nationalize care services in the face of the narrowing paid labor/unpaid labor clamp!

The struggle of women healthcare workers during the COVID-19 pandemic*