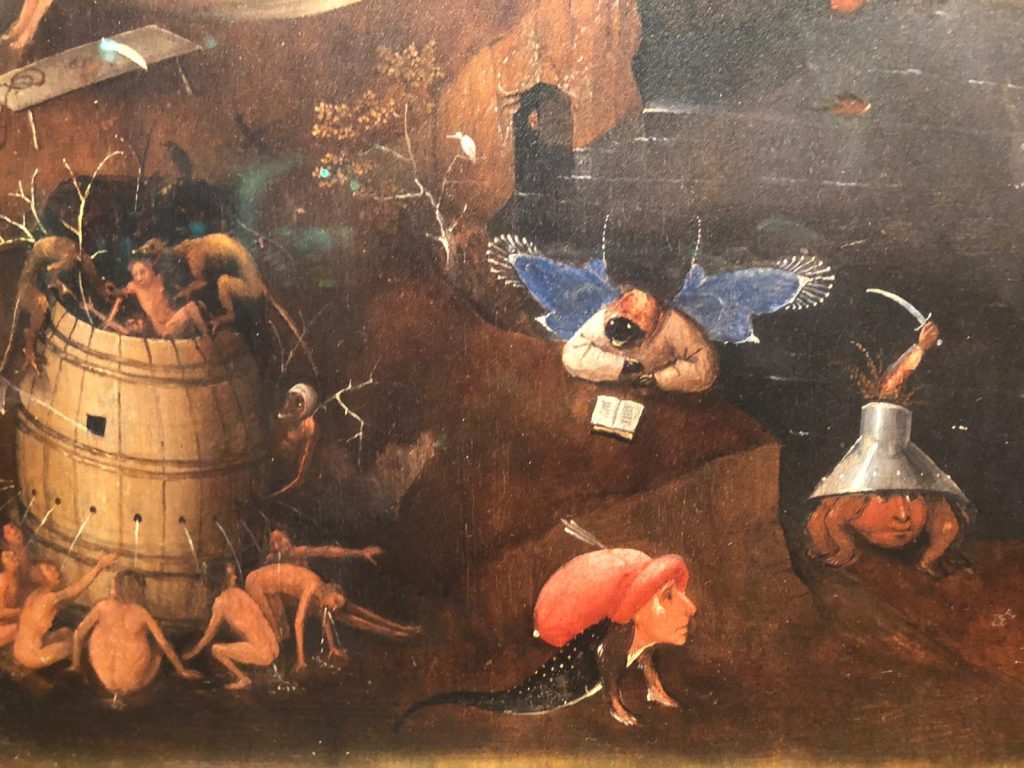 TV-series Star Trek has left its mark on the childhood of a generation. Those who have seen the show know that when Captain Kirk of the Starship Enterprise utters the words “Beam us up, Scotty”, the characters disintegrate into their molecules and then reintegrate in the location where they want to travel to. We have grown old watching Star Trek and many other similar sci-fi shows captivated by the illusion that the future would be completely different. We are amidst a pandemic, and all we see are the masks which are not supplied in the most powerful states of the world; health-care personnel struggling to work wearing garbage bags for protection; inadequate hospitals which on account of privatization do not consider having in stock the necessary materials for dire times; patients who die in their homes or are left with high bills to pay since they do not have medical insurance. The question posed by one of these people just before being resuscitated due to respiratory difficulties is a question that we need to keep in our minds: “Who will cover the expenses?”

We are going through a pandemic which has confined not all but many of us to our houses and resulted in physical and social isolation. Even though 100 years have passed since the Spanish Flu (it is called as such even though it did not originate in Spain) the fact that we are once again facing the same incurability, lifts the lid off the truth, as it happens in times of crisis. The realities of life which are hidden behind the cogwheels begin to make themselves manifest. Some concepts start to reoccupy our everyday conversations. For instance, the concept of immunity  –for those of us who are not medical doctors it is a concept we have heard about in science classes but did not know what it is good for, and for medical doctors, who are also uncertain about what it is exactly good for since they rather refer to pharmaceuticals for solutions, it is a matter of basic sciences– has occupied a central stage in our agendas. The fact that the possibility of one getting sick is dependent on the arm wrestling between the pathogen’s virulence and the immune system is also a subject-matter of basic sciences.

It might be surprising for many that the body’s fundamental defense mechanism against the diseases has remained so out of focus for so long. However, this pandemic against which science is also desperate, we are reminded again that the immune system is as important as washing our hands. The fundamental cornerstones of the immune system are healthy nutrition intake and sleep, regular exercise, access to clean air, water resources, and healthy housing as well as a holistic psychological health. As it can be extrapolated from these necessary conditions, taking individual precautions are not always adequate. What is needed concurrently is regular income and a livable environment. One of the realities that resurfaced during this pandemic is that any policy that can be characterized as neoliberal is structured not with the intention of giving priority to human life or the needs of the people but is rather it is driven by profit-making and economic development defined as the priority given to the interest of a handful of corporations. Again, in line with these neoliberal privatization policies, what is at stake is that healthcare provision is no longer seen as a public service. Health is no longer regarded as a birth-right, but as a purchasable commodity, the acquisition of which is everyone’s individual responsibility. The commodification of health reveals the fact that people can only access healthcare services if and only if they have the finances to afford it, and this state of affairs, particularly in times of pervasive crisis like the pandemic we are living in, exacerbates the vulnerability and anxieties of people. As healthcare becomes commodified as a service producing profit, the priority of this service is no longer the prevention of natural diseases, but the treatment of people who have become clients when they become sick. For this reason, preventive healthcare services are regarded as unnecessary measures and precautions that cause unnecessary spending and reduce the profit margin of the corporations. The investments are not directed towards prevention of diseases, but to expensive technological devices and pharmaceuticals. In case of sickness, providing a diagnosis  and treatment of the patient using pharmaceuticals are seen as the necessary steps to be taken. Once the goal is procuring profits from health, the giant hospitals become more dependent on both healthcare services geared towards treatment and hospitalization of more patients.

It is a well-known fact that pharmaceutical companies constitute the second biggest and powerful industry after the weapons industry. However, we rarely think about how this fact affects medical education and practices. The lack of preventive healthcare services coupled with the air and water pollution, the poisoning of earth with pesticides and various other chemicals, desertification, the food products losing their nutrition values, result in chronic diseases becoming widespread. The link between the increase in the number of people who suffer from autoimmune diseases, diabetes, heart conditions, autism as well as cancer and the destruction of the ecosystem of the planet Earth and the fact that we are breathing and eating poison, is rendered invisible or completely ignored.  The microsystems in our guts and bodies also experience a similar destruction as that of the ecosystem of the earth.

For some time now, we know that our immune system is located in our intestines. Approximately until we are three years old, we keep developing a micro flora –as rich as the rain forests– or in other words a micro ecosystem in our intestines which has been previously regarded as a simple excretory passage. This flora is called the microbiota and it comprises almost 100 trillion bacteria, viruses and fungi. We know that this ecosystem with which we live can influence our psychology and direct our mental activities or decide on what kind of allergies or immune diseases we are to develop or not. It can decide on whether we would survive or not. Despite the fact that the functions of the majority of the “microbes” with which we share our body still remain unknown, we have some information about others. We are impoverished and rendered vulnerable against the diseases when the balance of this microsystem is altered, in other words, when some kinds of microbes over-reproduce. Just like planet Earth. The strength of our resistance to diseases is based on the richness of the diversity of the nutritive flora. Destruction of the forests, mineral explorations, opening of agricultural fields and forests to construction, increasing levels of environmental pollution not only lead to a decrease in the diversity of the flora but also accelerate the rate of climate change and increase contact with the wildlife. It is said that this contact with the animals of the wildlife facilitates the emergence of new pathogens that can travel between human beings and domestic animals. A fact which we often forget, or for that matter, we never think about is that there is a vital bond between the trillions of “microorganisms” that inhabit and constitute our bodies and the “microorganisms” that constitute the biosphere. The fact that if we keep on destroying the ecosystem on earth, we are doomed to become extinct.

If we do not believe that diseases come into being suddenly and with no reason, or explain away everything with our genetic traits, we need a medical practice which is organized in order to explore when and how mechanisms creating diseases in the body are broken; to think why a person gets sick but not the other; and to mobilize the self-healing and organization mechanism of the body. We need to deliberate on the distant medical education which, instead of exploring the underlying reasons, gives a final name to diseases just to be able to prescribe medication.

We refrain from questioning the independence of science due to the fear that if the idea of scientific independence is unsettled, we will be left in a desert without a ground to stand on, fall prey to superstitions and unscientific practices, and surrender to charlatanry. On account of these fears, we prefer yielding to that already exists. However, even though the body of practices that we call medicine finds its source in science, it might not always be the science in itself. It is often affected and influenced by existing policies, political preferences and patriarchal conventions. For science to be independent, thousands of dollars of research funds should be spent not for corporate profit but for publications committed to public health, and the pioneering scientists should produce publications for the benefit of the public health without facing the unemployment threat and with true scientific preferences. In an article Chomsky wrote during the pandemic, he explains the cause of Coronavirus as neoliberal savagery. He says that while the laboratories all around the world could have started working on a potential pandemic way earlier, they did not do it due to avarice and that these companies, which he calls “tyrants” find it more profitable to produce body lotion than engage in vaccine research. We know that this virus is a mutated version of the earlier coronaviruses, and that the Pasteur Institute had developed a method to find a vaccine for the previous virus, but the studies were suspended for not getting funding. It is not true to say that the world, more precisely, the scientists were not ready for this pandemic. In fact, a 2015 study mentions the possibility of the outbreak of a SARS-like virus originated in bats. That is to say, scientific research anticipated it, but they probably could not receive funding for the medication.

During the pandemic, the lack of the vaccine or any strong medication as well as the significance of immunity increased the demand for vitamins and herbal products that are known to boost immunity. The importance of antioxidants and vitamin-rich nutrition is all the more emphasized. In addition to those who already know the positive impact of particularly vitamin D and vitamin C on immunity, those who used to consider these to be nonsense started consulting and researching about which products they should use. In fact, the healing power of herbs has been known for centuries especially by women. Curiously enough, quinine, one of the medications used in this pandemic, is an alkaloid extracted from cinchona trees. The use of quinine for malaria treatment which had been treated with bloodletting methods until 1681, caused abandonment of the Galenic medicine and brought many ineffective treatment methods to an end. Just as in the case of the discovery of aspirin in 1828, yet another crucial medication extracted from willow bark, these were the times when medications were not patented. In capitalism, conversely, patent rules apply to medications and these rules procure incredible profit rates which are allocated to corporations. Natural products cannot be patented, thus, corporations refrain from allocating funds to high-cost research and development that is required for pharmaceutical research as it is not profitable. Which corporation would invest in a product that it cannot patent and profit from? Speaking of which, it wouldn’t be wrong to say that bio-equivalent female hormones have not become widespread on account of patent considerations.

According to Arundathi Roy, this pandemic is a gateway between worlds. It is up to us to pass through this gate keeping these truths in mind and reminding ourselves that the commons are not a part of our health, they are our very health.

How are our lives shaped through the protocols of the Presidency...

The rainbow that cannot be banned and the importance of solidarity