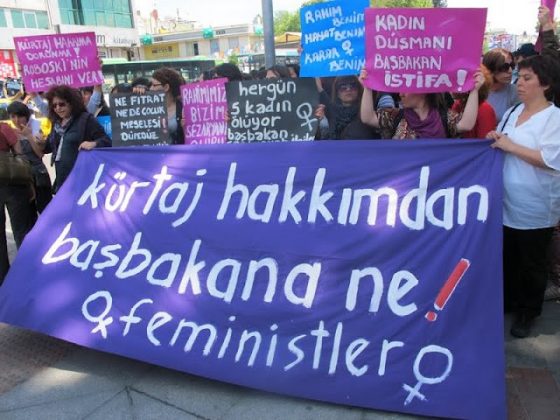 Prime minister’s following statements brought abortion and c-section to the foreground: “I see abortion as murder”, “You keep on saying Uludere. Every abortion is an Uludere. I am asking you, what is the difference between killing a baby in the mother’s womb and killing it after it is born. We have to know that this is a sinister plan aimed at erasing this nation from the face of the earth.”

The first response from the streets to this statement came from Istanbul Feminist Collective. On May 27, feminists who say, “Abortion is a right, Uludere is massacre” blocked the traffic in front of the office of prime ministry in Dolmabahçe Palace carrying a banner saying  “Why does my right to abortion bother the prime minister?” In different cities, women took to the streets. Many different sections of the society responded to these statements. On June 4, thousands of women met in Kadıköy with the slogan “Our right to abortion is not open for discussion. Abortion is a right, Uludere is a massacre”. The signatures of almost 60,000 people and 1000 institutions which were collected on the website kurtajyasaklanamaz.com were sent to the parliament and government officials. Many women who say, “My body, my decision” and “This is my issue” and many men who say “It’s women’s, my partner’s, my daughter’s body and thus it is her decision” participated in large numbers to the campaign initiated by Bianet. During this period, the most participated and unremitting platform called Abortion is a Right, The Decision Belongs to Women which tried to reach people via pamphlets and manifestoes organized synchronous protests in many different cities on 8 and 17 June. The statements pertaining to abortion were brought the forefront as a part of AKP’s (Justice and Development Party) aim at controlling and regulating the bodies and sexualities of women particularly through family policies.

Against the prohibition of abortion, an opposition beyond the already present anti-AKP opposition has emerged. Women within AKP also voiced their protests sometimes outrightly, sometimes under their breath. During the street protests, slogans such as “Abortion is a right” and “Our bodies belong to us” came to the fore politically. Erdoğan, targeting the slogan “Our bodies belong to us”, claimed that this slogan is wrong. However, they were not strong enough to prohibit abortion, so they stepped back. However, the government took a different turn of controlling and regulating women’s reproductive capacities and sexualities. They began to keep records of women through a legally regulated system that monitors pregnant women, newborns, and prenatal and postnatal care (GEBLİZ). The government did not illegalize abortion yet de facto prohibited abortion through new public regulations.

The rainbow that cannot be banned and the importance of solidarity

A short note on divorce and alimony