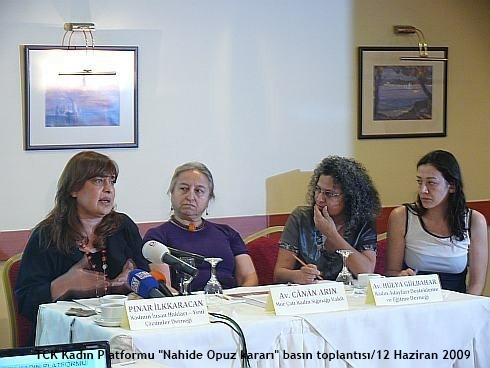 ECtHR penalized Turkey on June 9, 2009 for not protecting Nahide Akgün (Opuz) from male violence. With this decision, for the first time, a European country has been convicted in a court case pertaining to domestic violence by the Strasbourg Court.

Nahide Akgün married Hüseyin Opuz in 1995. Nahide has been exposed to the violence perpetrated by her husband many times. She filed a suit against her husband, but the husband was released due to lack of evidence. Hüseyin Opuz wounded Nahide with seven knife strokes in October 2001. He also got released of this crime with a fine.

The complaints made by Nahide Akgün to the police and the prosecutor’s office did not yield concrete results. She even had to withdraw some of her complaints to the prosecutor’s office following her husband’s threats. As a last resort, she tried to escape. In 2002, while she was moving from Diyarbakır to İzmir with her mother and three children her husband intercepted her on the way. Her mother, who was trying to protect her, was killed by her husband. Although Hüseyin Opuz was sentenced to 15 years in prison for the murder of Nahide Akgün’s mother, he was released in 2008.

On the grounds that the law enforcement and judicial authorities of Turkey (in other words the state), which had remained deaf to the behaviors of the ex-husband towards Nahide and her mother, had violated the European Convention of Human Rights’ articles on right to life, prohibition of torture, right to a fair trial, and prohibition of discrimination, Nahide Opuz’s attorney Meral Danış Beştaş appealed to the ECtHR. In the application, it was emphasized that this insensitivity stems from the inequality of women and male domination. The Court ruled that Turkey acted in a discriminatory way by not protecting a woman who has been exposed to male-violence albeit her appeal to the prosecutor’s office. The Court fined Turkey a compensation amounting to 36.500 Euros.

Women’s Platform on the Turkish Penal Code in the press conference that they held on June 12 at Taksim Square Hotel evaluated the ECtHR ruling pertaining to Nahide Opuz’s domestic violence complaint and called “the government to immediately take action in implementing the legal amendments, taking necessary measures to realize the rights, completing the half-done regulations in order to ensure that women can participate in every aspect of life as equal individuals and mobilize all the resources to this end.”

Who is afraid of HPV?