The reason why women in the society have been feeling “dirty”, remaining in silence and putting the blame on themselves for years is actually hidden in the phrase “her rapist”. 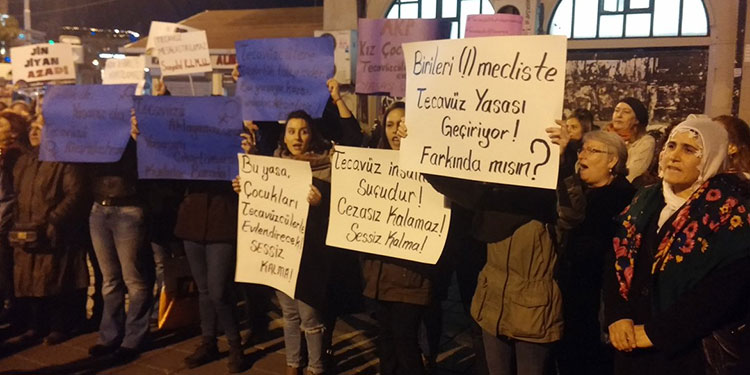 During the previous weeks, we discussed the bill proposing that the rape survivor woman be married to “her rapist”[1], and objections to it. I’d like to write about one aspect of these discussions that drew my attention and in so doing mention media coverages which serve to justify the conjugal intentions.

We first discussed the bill and potential repercussions of the codification of the bill. We, hundreds of women took to the streets and collectively objected to the bill, for women’s solidarity keeps us alive. This bill would also pose an obstacle to women who speak out and express what they have been through, not to mention those women who, after the rape, are concerned about the kind of reactions they might receive from their family, social circles and the society in which they live and give up on expressing what they have lived through. The reason why women in society have been feeling “dirty”, remaining in silence and putting the blame on themselves for years is hidden in the phrase “her rapist”, as well.

This phrase that we have normalized establishes an ownership link between the rape survivor woman and the man who has raped her.[2] Seemingly a linguistic practice, this phrase in fact positions the man who performed the act as the “owner” of the woman who is subjected to that very act. That is to say, the phrase “her rapist” evokes the question of “whose rapist” the answer of which can be given as “that woman’s rapist”. The phrase “her rapist” ends up serving to justify the rapist’s act of non-consensual, unpermitted intervention into someone else’s body through informal ownership link. It creates a perception that as if the “owner” of that body and the woman who owns that body is the rapist due to the act of rape. A woman who has been subjected to this act is reminded of an ownership. That is why, we should not use the phrase “her rapist” but “the person who has raped”. The abovementioned bill was an attempt to formalize this informal ownership link through marriage. Accordingly, through marriage, instead of bearing the consequences of his act, the rapist would be enabled to dominate the woman he has raped.

In relation to this, I cannot accept the use of the word “rapist”. Because the word “rapist” defines the act of rape as if it is a profession. Just like the person who paints is called “painter”, the person who rapes is called “rapist”. It can be argued that the underlying reason for that is the Yeşilçam character Coşkun the Rapist. Coşkun Göğen has portrayed a man raping female characters in many movies. That’s why he was given the “nickname” “Coşkun the rapist”. The mention of Göğen with this nickname was framed in a humorous language in interviews or tabloid TV shows, and in fact the nickname itself was considered to be an element of humor. In other words, the “job” of Coşkun’s character, came to be defined as rape. For this reason, I don’t like the word “rapist”. Because it maintains the idea that men who commit rape as a business practice do not do anything “wrong”. Put differently, it conveys the feeling that if a woman walks alone in the street late at night, a man whose is a “rapist” by profession teaches her a lesson and puts her in her place by raping her, that is, by supposedly “performing his job”.

We can analyze Harika Avcı’s movie Alışırım [I’ll Get Used to It] as one of the media representations which creates the belief that it would be positive for a woman to marry the person who has raped her. In the movie, Harika Avcı is a beautiful, charming woman and she is abducted and locked up in a house by a group of men. These men one by one rape the character performed by Harika Avcı for several days. Even the title of the movie sums it up actually. So much so that Harika Avcı’s character falls in love with one of the guys who raped her, the one performed by Hakan Ural. And she forgets all that happened to her, and her experience becomes more bearable.

Another example is also a Yeşilçam movie Fatmagül’ün Suçu Ne? [What is Fatmagül’s fault?] and the more recently aired TV show which has the same title as the movie. Before moving on to the analysis of the movie and the TV show, I should make something clear: the TV show deserves praise for bringing women’s and LGBTI movements into the story and, unlike the movie, for giving place to a woman seeking her rights. However, since these productions do not offer an alternative life other than the “happy” life which a woman will build with the person who has raped her, this above-mentioned bill can be presented as if it “saves” a woman’s life.

The plot of the movie and the TV show was as follows: While a young woman walks around a beach, she is raped by a group of men. In the group, there is a man who does not rape her but creates an environment for and does not prevent the rape. The other men get away with it because they are rich, the poor one, who does not rape her but does not stop the rape either, is released for agreeing to marry the rape survivor woman. This is an apt example revealing the class dimension of the story. Because, had the bill been enacted, wealthy men who commit rape could have used resorted to a solution shown in these productions to get away with the crime.

On the other hand, the relation between the bill and these productions is as follows: Although Fatmagül initially stayed away from these men as in both productions or even though the man treated Fatmagül with anger for ruining his life as in the movie (because, marrying her, he actually saved Fatmagül and her life), at the end of these productions woman and man fall in love and live happily ever after. Marriage is presented as a solution to save the “ruined” life of rape survivor woman.

As a result, from everyday media representations to political proposals, men, whether they are depicted as fighting the monsters (prince charming or romanticized abuses[3]) or they become the monsters by committing an act of rape, they are introduced to us as protectors and saviors of women. Instead of providing women with the legal and social environment in which women can live the life they choose, various methods are found to condemn women to a family or a man. The phrase “her rapist” should also be a concept that we should avoid using as it is evocative of men as the owner of women and as the place to where women belong.

[1] Since the law proposal was discussed using this phrase, I used the same phrase at the beginning.

[2] Because I am writing particularly about this bill, I make the categorization as rapist man and rape survivor woman. I am aware of different cases, for example the Kemal Ördek case. For detailed information, see http://bianet.org/konu/kemal-ordek. Last accessed on 08 December 2016.

[3] For another article that I discussed this concept, see https://catlakzemin.com/romantiklestirilen-taciz-yeni-model-erkekler/. Last accessed on 08 December 2016.

Women’s labor in times of crises: From strategies of capital’s profitability...