It may take many years for women to comprehend whether or not the attention they had received from the teachers, who are well-informed about their eagerness to be intellectually visible and respectable since adolescence, was a genuine form of relation and communication. 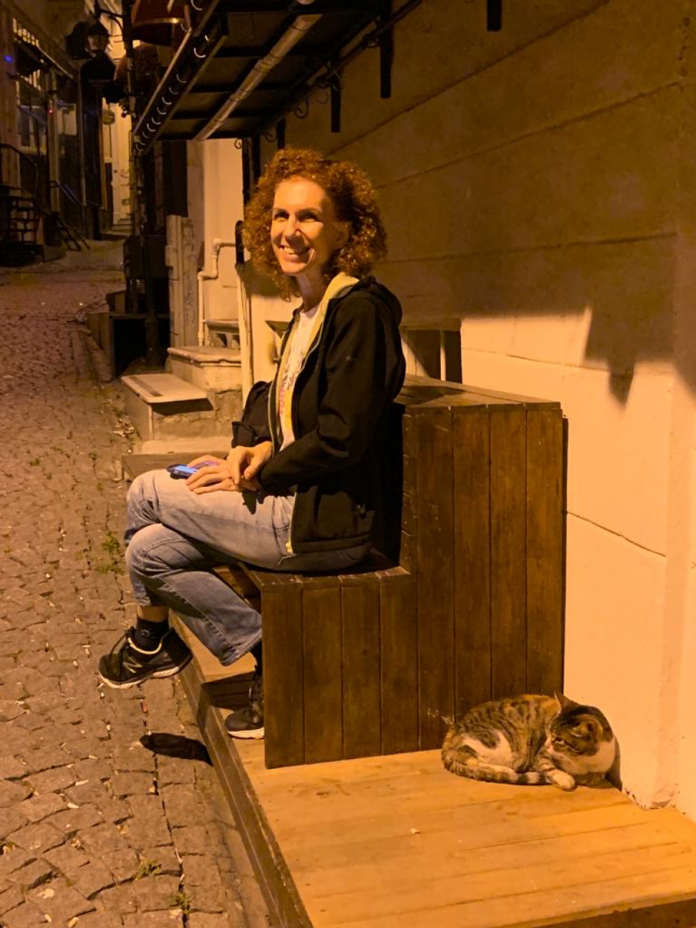 There is a photograph in front of me on the screen of my phone. I am looking at it. My partner took it the other day. During one of those long walks which we made a habit of taking in the Corona days whenever we find the opportunity, I am sitting on a boarding step in between the streets in the vicinity of the Galata Tower, approximately 20 steps away from the iron gates of the high school from which both of us had graduated. I have a smile on my face, and on my left side cheerly lies a cat. Whereas my upper body seems to be relaxed, my legs are in a state of unnecessary strain. As someone who has done workshops on how to transform what has been suppressed and got stuck in our bodies for years, the words of Pina Bausch ring in my ears: “Movement does not lie.” Crossed legs and hands in the shadow of a smile… I ask myself why I had sat down in that neighborhood on that specific day with my pent-up body. The day this photograph was taken, I had read a piece by Candan Yıldız on T24 just before leaving the house for a walk. The piece was about the story of peer-abuse during high school years shared by Deniz Dülgeroğlu in one of the Merdiven Altı podcasts. For sure, during these days when we retreat back into our houses, the frequency with which we send messages to our friends has increased, and from time to time, we have ended up raking up the past and spilling out the old photographs. What prompted Deniz Dülgeroğlu in doing this podcast were the old photographs shared among her own high school group. I am glad that she did the podcast. I not only read the article, but also listened to it. Just as I was listening to the podcast, abuse and defamation stories dating from my high school years, which I, perhaps, have carefully camouflaged began to resurface.

With the streets of Istanbul becoming less crowded during the pandemic, it seemed to me that a huge cloud of fog that blurs my view was dispersing before my eyes, just like the scattering of the fixed air pollution that hovers over the city or the dimming of the regular noises that fill the streets. During this period, like many of us, my vision has become clearer. With my perspective cleansed of its cloudiness, I started to question as someone who is living in the vicinity of her old high school, why I like this neighborhood and find myself in this place whenever I have the opportunity. Above everything else, I felt happy in this neighborhood, or at least, I thought I did. How well I knew all those stones, walls, and steps. Who knows for how many times I threw myself into the school in the darkness of early mornings with my averted looks fixed on the ground in a state of vigilance. Who knows for how many times I have enacted, as I climb the beautiful Kamondo Stairs, the scene of a beloved friend of mine from the volleyball team slamming the ball on the back of a man after being harassed by the hands of that very man. I could have not even imagined that years later, when I was harassed by another man in a similar way as I was walking down Kurtuluş Street, I would find myself copying that scene and pulling a marvelous slam with my skinny body.

In our high school years, we did not question and accept unfamiliar men abusing us in the streets or in public transportation with a courage the origin of which we never fully grasped. This was not something about which we talked or made a fuss. These things happened and the only methods of struggle we know were limited to staying away from these men, or in some rare occasions, resisting their behavior with a slam or with our screams. The real issues were the things we were exposed to within the walls of the school building in which we took refuge after escaping the dark mornings and the radars of those “rascal” men. My friends and I were systematically abused by two of our teachers. We were middle- and high-school students who were going through adolescence. During the 1980s, when our lives were mostly confined to our houses for different reasons, our schools and teachers took on the task of preparing us for a bright future with a western, progressive approach. We had believed in this story and followed our classes with great enthusiasm. When I take a look at our high school photographs, our curious eyes and smiley faces do not square with the stories of abuse to which we were then exposed. We had not only normalized these stories but also covered them with a fake joy that comes with the energy of the adolescent years. We had been in deep silence for years until one day when we shared with each other around a joyful dinner table how those two teachers had harassed us in different ways. The harassment we were exposed to outside the high and protective walls of the school did not hurt us as much. We had already found ways to react against those. However, when it was our teachers with whom we had formed bonds based on respect and admiration, we were not able to raise our voices. The denial mechanism inside us was functioning. We were telling ourselves “they did not do such things”. Maybe we accepted those moves as compliments. These well-read and educated men were different from those abusive “rascals” on the streets. We were normalizing their behaviors as their way of showing recognition and appreciation. I recollect those memories from my senior year about one of these above-mentioned teachers chasing junior middle school girls up the stairs. That was the first time when I intuited that abuse and harassment are matters of power. Touching small and unprotected girls under the guise of joke and making it a matter of laughter, making a play out of abuse and precluding any form of objection… It is so familiar, isn’t it? They echo all those utterances of “I was only joking”, “You got me wrong” with which we are familiar as adults, or even the sentences such as “Are you Beyonce or something, why would I abuse you” which are introduced to our repertoire via TV series.

All adult men know very-well who and how to abuse and which methods to use. The women who are not aware of this mentality are left with a series of questions in their hands about the attention that is shown to them, or in many cases they are simply left with silence. Now I know that this silence insidiously spreads to all forms of future relations including those formed with intimate partners to discriminatory mechanisms at the workplace.

The practices through which the women of our generation normalize abuse and harassment continued until women began to find different spaces of solidarity throughout the years. From time to time, the guilt we felt on account of not being able to give a name to what we had experienced had riveted our silence. Today, the younger generations have access to many resources and platforms which share detailed information about the mechanisms of abuse and harassment. Still, what does the existence of young women –high school or university students– who are inclined to read the intimate messages, touches, and looks by the teachers whom they trust as a form of compliment say to us? How come abuse and harassment can be understood and accepted as a way of flirting smoothly?

Through my awkward posture in the photograph, it was as if I was teleported to those days when I uneasily sat at my desk in a high school classroom. I found the opportunity to analyze a case which had remained hanging in the air for years. I wanted to write about a past experience from almost 40 years ago in order to emphasize the ongoing abuse and harassment at today’s educational institutions. Putting these experiences into words is like reopening an inflamed wound which had been hastily stitched and closed. After all these years, experiences, and support, is it still possible to heal that wound? I do not think so. I am at an age to know that complete healing is a delusion. On the other hand, I can say that shattering my years long silence and turning back to my own experiences to write these words outside the confines of academia is very empowering.

I am pretty sure that I will return to that neighborhood with happy feelings. After all, it is where I experienced my adolescence years of awakening. The seeds of many of my relationships with my high school friends were sown there, in that neighborhood. However, it is no longer possible to cover the stories of abuse and trivialization that have been sedimented in my consciousness. Even my body gives signals about the impossibility of this. It may take many years for women to comprehend whether or not the attention they had received from the teachers, who are well-informed about their eagerness to be intellectually visible and respectable since adolescence, was a genuine form of relation and communication. Compared to the past, today we have more spaces to share our stories in a country where being abused is attributed to women’s ignorance or naivete, or treated as a misunderstanding. It is very liberating to  lend an ear to our bodies as we do to our minds sometimes and resurface some of the stories remaining in the shadows of our joy… As someone who could share her own story 40 years later, I see no point in reminding that it is not easy to share stories of abuse and harassment in public. Our existence is shaped not by what happens to us but through how we react to those things. We often come across the responses which were not given at the right moment as a commonly shared knot in the life stories of women. As I share this story, deep down I feel that I am patiently carving a petrified ghostly weight which I had been carrying around for many years. The doors of my high school cease to be my mind’s and soul’s doors of silence. As the people who built this wall of silence, we also have the strength to pull it down. What lies at the foundation of making our mechanisms which we use to deal with abuse and harassment work is the courage to look back, albeit years later, and to analyze, by asking for support if necessary, the stories frozen in the past in a way that would serve today. In order to breath, produce, and exist in genuine joy, it is of utmost value to untiringly narrate our subjective experiences  over and over again.

Feminist research at the intersection of immigration and gender / Interview...

Brief past and present of transgender people in Turkey: Ülker Sokak...