“I am a 28-year-old woman who tries to make a living and build a career. Harvey Weinstein is a 64-year-old, world-famous man and this is his company. The balance of power is me: 0, Harvey Weinstein: 10” 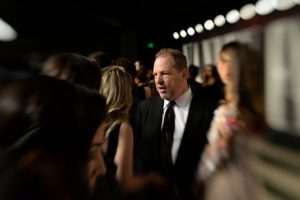 Recently, following a special news coverage by The New York Times, how American film producer Harvey Weinstein sexually assaulted young women for many years is being discussed. Many other testimonies came to light after this coverage which was written with reference to various sources such as testimonies of women who he sexually harassed, employees’ testimonies, some news that popped up in the media at different times yet not captured any attention, and complaint files. For women all around the world, sexual harassment and assault is a difficult experience to stand against and to share after being exposed to. Not only because it is traumatic -sexual harassment and rape does not have to be traumatic for every woman-; the hardest part is that harassment, which is a result of power asymmetry, renders women powerless and makes them feel helpless and guilty. And of course, the difficulty of finding a person who would listen to them without blaming and believe what they have been through… Notwithstanding the diversity of geographies, cultures and classes, the pattern is very similar. This time, we see a famous producer and early career young women. Locations are the US, England and France, more precisely, hotels where Harvey Weinstein stayed.

Men harass women because they think they can. Because the patriarchal system re-faces itself in every cultural and geographical context to reproduce the relations of property over women. Another aim and result of sexual harassment is the exclusion of women from certain areas and making women pay for being in the public space. Not that home is a safer environment, in intimate relations, sexual violence has different dynamics.

Although Weinstein’s case is openly discussed recently, it turned out to be a story that everyone knew and about which everyone was already talking. It turns out that Weinstein’s methods remained the same over the years. A common thread that appears in the testimonies of women who have been sexually harassed by Weinstein is that at the time of the incident, they were all in their 20s and Weinstein invited these early-career women to his hotel room to talk business. Weinstein welcomed some of them in his bathrobe, asked others to give him a massage, and sexually assaulted other women. He threatened women who rejected him with ending their career and he actually ended the careers of some women.

These women either worked at Weinstein’s production company or were young actresses. There are two main reasons as to why women remained silent for years, especially those who worked at his company: The first one is their career. Weinstein, an influential and powerful person in the Hollywood industry, has the power to ensure that those women will never find a job in the industry. Lauren O’Connor, who filed a complaint and felt compelled to reconcile, summarizes the situation: “I am a 28-year-old woman who tries to make a living and build a career. Harvey Weinstein is a 64-year-old, world-famous man and this is his company. The balance of power is me: 0, Harvey Weinstein: 10.”

The other reason is the non-disclosure agreement (NDA) signed by everyone working at his company. This agreement prohibits employees from making statements that might affect the employer’s commercial interests. One of the anonymous company employees’ remarks, in The New York Times article, that they realized what they had done was to arrange casting meetings with actresses for Weinstein. That is, with the aim of having sexual intercourse, Weinstein makes women believe that he would cast them and uses his employees to that end. However, the employees could never speak out due to the NDA. Instead, they developed strategies such as not going to meetings alone, advising each other to wear thick clothes while going to the meetings. Over the years, other women filed complaints, too. In each case, the parties reached a reconciliation as a result of which Weinstein paid compensation. NDAs are an indispensable part of these reconciliations. Accordingly, women are by no means allowed to talk about the incident – a systematic mechanism every step of which is carefully planned.

After the scandal unfolded, many women started sharing their experiences about Weinstein. Women, among whom are stars such as Angelina Jolie, Gwyneth Paltrow, are speaking out and telling their sexual harassment and rape stories that lasted for years. At this point, I suggest taking a step back from the story and ask this question: who has not heard the cliché of an actress having a sexual intercourse with a producer? This sentence, so common that its source is almost impossible to pinpoint, tells us that women can accomplish only by casting their sexuality as a price -in other words, selling their sexuality. Here, the problem is not with whom and with what purposes women have sexual intercourse, the problem is the men who, benefiting from the power asymmetry, have relationships with women. In this case, it is a producer; in other cases, they are an admired writer, a professor, a coach, a teacher or a manager. In response, Weinstein accepted that he might have mistreated his employees as well as that he needed help. However, there is one and extremely important thing he did not admit: the things he did were not based on mutual “consent”. Maybe Weinstein is not lying, that is, maybe it didn’t occur to him that those women did not give consent. He doesn’t know the answer because he did not ask any of them. He never thought that when he, as a producer and as a person who has the power to have an impact on women’s careers, desired those women, he had the power due to the advantages he has, and he abused them with the power he holds. It is the producer’s responsibility to recognize and combat the systemic problem that tells women that she should sleep with the producer in order to advance her career. Weinstein, in short, says, “I am 70 years old and the work life used to be different, I couldn’t keep up.” In fact, nothing much changed in the work life. Women have been striving to survive for years in spite of men like Weinstein. Men like Weinstein, on the other hand, guess when and how women are more vulnerable and susceptible to abuse. It is not a coincidence that women who have said ‘he has sexually harassed me’, ‘he has raped me’ went through all these at their 20s and at the beginning of their careers.

Why women haven’t spoken up is well-known, what about the entire industry? What about men? At this point, we need to dig out who Harvey Weinstein is a bit more. In addition to being a producer who can market even a mediocre movie to do well at the box office and win an award, he is known to be a democrat. In fact, here comes one of the most disgusting things about him! These are some of Weinstein’s activities in recent years: his company distributed The Hunting Ground, the documentary about sexual harassment in the university campuses, he organized a fundraising event for Hillary Clinton’s election campaign, he contributed to opening a faculty chair in the name of Gloria Steinem at the Rutgers University, he participated in the Park City, Utah leg of the Women’s March in January. Isn’t he an exemplary democrat, supporting women’s rights?

In the meantime, some people tweet about what everyone already knows. This is just the tip of the iceberg. Male solidarity, just like a cancer cell, metastasizes to and takes over all spheres of life. There were many posts in solidarity with women who stood up against Weinstein. Some women told their own experiences while some others showed solidarity with other women. There are actors among them. My personal favorite is Ben Affleck who, I think, is a noteworthy example. Ben Affleck shared a post stating that he was saddened and angry, that he did not know about it, and said “we need to do better at protecting our sisters, friends, co-workers and daughters.” Immediately after, he was reminded of how he sexually assaulted women in the past. Affleck apologized for his “inconvenient” behavior. Rose McGowan, one of the women who were sexually assaulted by Weinstein reminded Affleck that he remained silent even though he knew what happened to her. By the way, I’d like to remind you that Ben Affleck’s brother Casey Affleck, whom the Academy had no problem awarding this year, had sexually assaulted two women working with him. Of course, male solidarity manifested itself in this incident which was covered up.

In this period, Weinstein was fired from the company named after himself, his wife Georgina Chapman left him giving the message that she was in solidarity with women. The latest news is that New York and London Police Departments started a prosecution against him about the accusations. We don’t know what will happen afterwards or if Weinstein will regain his reputation. Well, there are lots of rapists/harassers who have not been discredited. Nonetheless, despite the hypocrisy of keeping what everyone knew as a secret for all these years and, in turn, of helping Weinstein assault other women, there are silver linings. Because, women need to have faith in justice.

Harassers are everywhere. Sometimes, using the reputation and power they hold, they harass women at the universities, at the workplaces. Other times, they do it just because they are men and you are a woman who dares to go out to the streets. But who are these men? They are the director of the movie we liked very much, writer of the book, man who works at the next office, our childhood friend, brother, cousin, father, husband, boyfriend.

The most hopeful aspect of this dark picture is to encourage women to speak up about what they have been exposed to. Otherwise, we keep quiet. We remain silent about what we know. Because, what we face is a system which always protects and encourages the perpetrators and which, at the outset, manifests its disbelief in women. Price of speaking out might be heavier than keeping quiet. Every judgmental look you give to a woman who has said she was sexually harassed causes another woman to remain silent and countless women to be subjected to sexual harassment.