Considering the often-committed sex crimes on public transport, all municipalities should be able to prove that they have taken all necessary measurements and according to the duty of care so that women can benefit from these public services within the framework of equality. 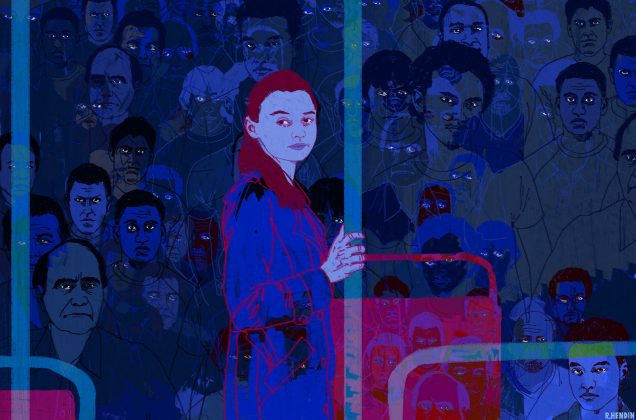 I am writing every sentence of this article on the sex crimes committed on public transportation bearing in mind that “transportation is a public service, and it is organized for the public good”.

We must talk about a public responsibility when it comes to harassment and rape on public transportation irrespective of the fact that they are run by public or private companies. If sex crimes are committed as a public service is provided, then the responsibility arises. The demand is not simply that the person who committed the crime of rape is sentenced. It’s also not poetic justice that these people are killed in prison like a hypocritical way of searching conscience. These do not relieve the municipalities of their public responsibility.

After the criminal is proportionately sentenced, we must turn our attention to ask: how do the relevant public authorities take responsibility for the often-committed crimes against women on public transportation? Are you keeping statistical data? Do the coordination centers for transportation (explained in detail below) established under the metropolitan municipalities have a holistic action plan?

In a restless environment where disturbing events are commonplace such as the news of a bomb explosion almost every week, and people try to guess the means and location of the next one; crimes committed against women in the public space do neither catch the eye of society nor the mainstream media. Or these incidents do not go beyond blowing up a “scandal”, and they don’t open a social discussion on the subject. The deterioration of the peace environment, fears, and the insecurity and uncanniness of the streets, limits use of the public space, especially for women. It can be observed that there are fewer women on public transport and the streets late in the evening than before. I cannot fail to mention one of the decisive developments of this period: the ongoing gender discriminatory discourses of political subjects regarding the visibility and appearance of women in the public space. Violence exerted against Ayşegül Terzi for wearing shorts and Ebru Tireli for playing sports in the park, thus gained a prominent place in Turkey’s history of violence against women in the public space.

Rape on public transportation came to public attention when Özgecan’s murder following a rape attempt on a dolmuş she took to return home in Tarsus sparked rage in public. It is important to examine what that rage translated into now. For example, have Mersin Metropolitan Municipality and Tarsus Municipality devised an action plan against these sorts of crimes on the abovementioned dolmuş route?

During the past year, we have also heard rape on public transportation stories from other cities:

In Gebze, a Romanian woman was raped by a public bus driver (September 2016)

In Istanbul, a Yemeni woman was forced outside of the bus and raped by the bus driver (September 2015)

In Ankara, an Azerbaijani woman was raped on a private shuttle bus couple days ago (January 2017)

It is possible to access these examples with a limited Google search. Not only do we lack an action plan but also reliable data on the matter. Perhaps we can treat the facts that in the three examples from last year we have found online, women of foreign nationalities were targeted; alongside the factors that influence committing crimes against foreign women or the distinct intent of the perpetrators in another article.

Our demand for proportionate punishment and putting an end to discriminatory discourses against women which act as encouraging and justifying factors for these crimes remain eternal. In this article, I would like to discuss a specific part of the responsibility by looking at public transportation from the perspective of the quality of the public service and by making a connection between the principles of providing a public service and the responsibility of municipalities for crimes committed against women, despite that privatization policies have muddled the field of public services from health to transportation, to education, and the role of central administration and local governance structures has changed.

Public transportation as a public service

In political science, public service is defined, in the shortest and simplest terms, as the function, duty of the state. Public services are continuous and organized activities provided to the public by state and other public legal entities, or under their supervision and regulation, to meet their collective needs and for the public good.The conceptual classification of public services and different theories are not within the scope of this article. My main objective is to bring the responsibility of municipalities forth in provision of transportation services as an administrative activity in light of the sex crimes and discriminatory behaviors on public transport.

Local governance structures take care of most services related to people’s daily lives. There are certain guiding principles to providing these services: continuity, equality, impartiality, adaptability, transparency, simplicity, and accessibility. Transportation, just like electricity, is categorized under financial public services, which is a subcategory of public services in general. Transportation is provided by actors that have the capacity to provide public services directly or by institutions or individuals who are organized for the public good under the close supervision of these actors. I will not be talking in detail about administrative law, which is already so expansive, and jump right into parts concerning public transportation.

According to the Law on Municipalities, a coordination center for transport should be established with the objective of running all land, sea, lake, and railway transportation services in coordination. Its mission is to:

Municipalities provide transportation services through private companies but the fact that private companies are providing the service does not relieve municipalities of their duty to supervise and responsibility towards the public. Considering the often-committed sex crimes on public transport, all municipalities should be able to prove that they have taken all necessary measurements and according to the duty of care so that women can benefit from these public services within the framework of equality.

However, when we examine the regulations and directives issued by Istanbul Metropolitan Municipality and Ankara Metropolitan Municipality on private public buses and public transportation, there is not a single mention of women or gender-based crimes that are frequently experienced on public transportation. The only regulation on crimes against passengers is on “insulting the passenger, mistreating them”. It is also clear that the “safety of passengers” heading, which is no longer than a sentence, in the IETT Passenger Rights Directive does not meet this need.

Following the rape incident in Ankara neither the municipality nor the related units, nor the private shuttle bus operator, nor the institutions or individuals who authorized the shuttle service made a statement. The only statement released was from the Chamber of Private Public Buses and the only point they made was that “the incident took place on a shuttle bus, not on a private public bus service. The incident is an immoral act.”

Will you act as the authority responsible for transportation as a public service?

Are you going to devise a concrete action plan with a holistic approach against harassment and rape?

Will the regulations, directives and other relevant legislation on public transportation vehicles change in line with this action plan?

Whenever harassment or rape is brought to public attention, the only “solutions” proposed by the creative public offices are pink metrobuses, pink buses and CCTV. We know that these methods are rather ineffective and that pink buses reflect another type of discriminatory attitude towards women. An exception to the widely known methods we are bored of hearing is the policy that granted women the right to get off the bus closer to their homes, regardless of the bus stops. Although this suggestion is welcomed, it is not enough to solve the issue on its own.

It would not be an exaggeration, or a baseless allegation, to say that there is a serious problem of inadequate street lighting in many districts of the 81 provinces in the country, especially considering examples from metropolitan areas like Istanbul and Ankara. We can make a long list that includes, but not limited to, the following areas of improvement: providing adequate street lighting on the streets and avenues, and the remotest corners, emergency buttons that cannot be inactivated by drivers, encouraging women who experience these crimes to report these incidents, launching awareness raising campaigns that empowering witnesses to intervene, increasing the number of personnel on public transportation and increasing the number of women employed in this field, establishing specific units that treat sex crimes on public transportation, increasing supervision over private companies that provide services, changing the registration policies, including amendments on this subject in tenders, technical specifications and concession agreements, and implementing penal clauses to companies that are responsible for providing the services when such an incident occurs.

There are a number of studies on this subject that inform action plans of programs and projects against harassment on public transport. The second part of this article is dedicated to action plans, research, and campaign examples from around the world.

Rape on public transportation and the responsibilities of municipalities– 2: Examples from around the world

Is healthy and happy sexual life possible after sexual traumas?

A tribute to Anne Sylvestre