The Istanbul Convention touches upon multiple aspects of the recent paradigm shift. It is important to tackle this global assault in its entirety, in the context of this process in which we had to learn the contents of an international convention with every single detail. 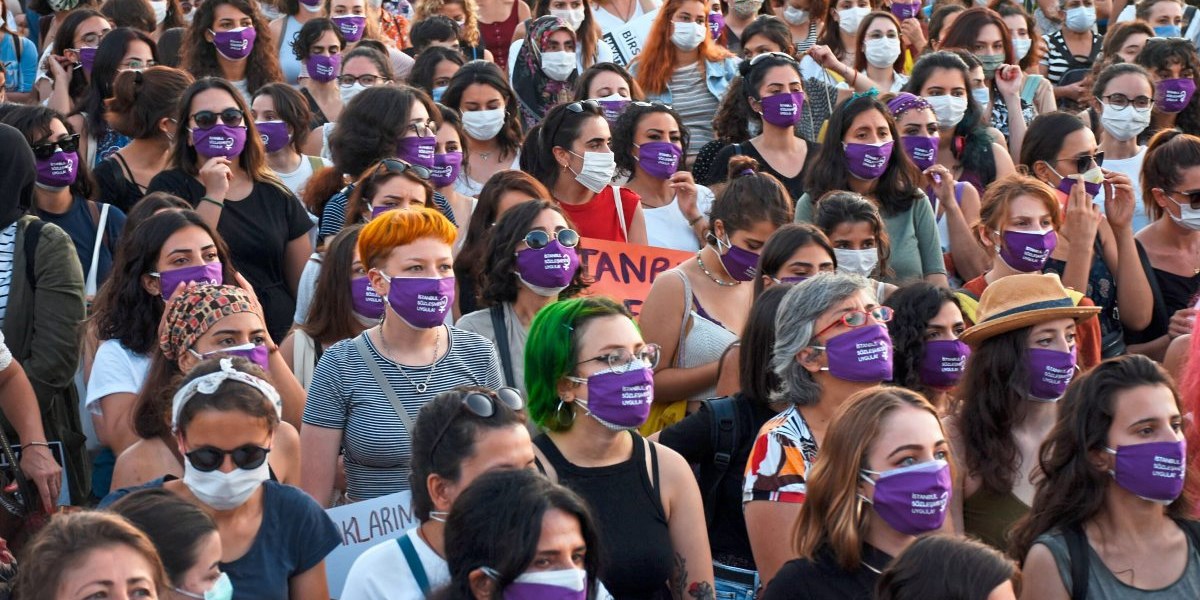 Unless there’s an unexpected turn of events, Turkey, the first signatory of the Istanbul Convention, will be the first country to withdraw from it during its 10th year celebrations in 2021, as of July 1st.

Following the presidential decision on March 20th, women across many cities in Turkey immediately took to the streets despite the ongoing pandemic, and millions of them protested the decision on social media. The protests are still in full swing today. Feminists and LGBTI+ groups in Turkey received support messages one after another also from abroad[1]. The importance and positive impact of the support for the struggle of women in Turkey, and transnational feminist solidarity are indisputable. Whereas this piece was written to underscore a global assault –not at all coincidentally– targeting the Istanbul Convention; and while combating this assault it is essential to move feminist coexistence beyond solidarity actions.

In Turkey, statements against the convention were initially uttered during the summer of 2020. At the beginning, it was surprising for an international convention to suddenly become a hot topic, but once we examined the issue from a larger perspective it was obvious that this discussion wasn’t anything novel. We’ve heard statements against the Istanbul Convention from the state officials in two countries during the same summer. In Turkey, AKP’s deputy chairman stated that issues such as gender and sexual orientation covered in the Convention are “incompatible with our society” and the signing of the convention was the wrong decision in the first place. Whereas, Poland’s Minister of Justice called for withdrawing from the Convention also arguing that the convention is in conflict with Polish culture and family values, within the same month. This call immediately resonated in Poland and the President Mateusz Morawiecki invited the Constitutional Court to assess the legal grounds of the Istanbul Convention. This step was also not the first of its kind, in fact Bulgaria had found the convention to be unconstitutional in 2018. 12 out of 45 signatory countries still haven’t ratified the convention and this is not a result of bureaucratic procrastination, but of a public stance against the convention which state officials found pertinent.

Even though violence against women is considered unacceptable today thanks to the feminists who have been long combating it; these discussions that revolve around the Istanbul Convention, which precisely strives to prevent violence against women are not surprising. Because the convention pushes the buttons of the sexist, homophobic, racist, and nationalist discourse of the far-right that has been on the rise in recent years.

Unlike its predecessors, the Istanbul Convention sets forth the link between violence and the power dynamics –namely, the patriarchy– that fosters this violence. It states that halting the first one is only possible by challenging the second one. The convention which stands against discrimination based on sexual orientation and gender and targets the existing gender system, also recognizes different groups that are faced with violence.It identifies the fixed gender hierarchies and the antiegalitarian perspective as the foundations of violence. Meaning, those who are against the convention get it right. The term anti-gender has recently become widespread, often used in reference to anti-gender discourses that are rising globally, organizations that support them and politicians who carry these policies to the official level. This political standing which builds the foundation of its misogynist, homophobic, transphobic discourses upon human nature and “fıtrat”[2] is often fostered by religious references[3]. It is not surprising that this perspective stands against the Istanbul Convention. This standpoint doesn’t recognize the different sexual orientations and gender identities recognized in the convention, as well as normalizes the existing gender roles and oversimplifies the resulting hierarchy by defining it as natural differences; ascribes women to motherhood and other sexist roles. They uphold the heteronormative family values and claim that the convention undermines them.

We’re going through a period in which transnational human rights discourses and systems are losing power, and this recent development is also conducive to such discussions around the Istanbul Convention today. 32 of the 45 signatories of the Istanbul Convention, signed the convention within the first three years it has been open to signature. I don’t think the ratification decision received any public attention in these countries, aside from the ongoing interest by institutions working on violence, feminist and women’s organizations. International conventions get drafted and signed, and nobody was aware of these processes until recently. This was especially the case during the 90s and 2000s when non-governmental organizations could defend global human rights standards, and their positions were widely accepted. We’ve moved from a period when basic human rights were defended –at least at the discursive level– to one in which these rights are questioned and states’ accountability under international law is targeted by the rising nationalistic discourses. One of the novelties put forward by the Istanbul Convention is precisely this mechanism for monitoring accountability. Thanks to the GREVIO reports[4], we find out that even in countries where the convention is not publicly contested, implementation problems exist and women can’t access the protection provided by the convention equally. GREVIO establishes a monitoring mechanism that enables not only governments and transnational organizations to oversee other governments, but also feminist, LGBTI+ organizations and women’s institutions to oversee policy makers and implementers.

The common argument about the “unconstitutionality of the convention” in countries where it is contested, reignites an ancient debate that upholds the supremacy of the international legal system and constitutional values.. (At this point, it is worth remembering that Turkey prioritizes international conventions in the case of a constitutional conflict. But unfortunately, we will see what the legal supremacy of international conventions will entail from now on, since the country was able to withdraw from the convention with a presidential decision overnight.) The “national values” they would like to protect today is comprised of a value system based on family unity; it is anti-egalitarian, –in their words– against “gender ideology”, homophobic and transphobic. The far-right extremist leader Orban who came into power in Hungary in 2010, immediately changed the constitution –one of the first things he did– and updated the constitutional definition of marriage as a union between a man and a woman. Similarly, parties that are against the convention continuously put forward the unconstitutionality argument in Slovakia, where marriage is also defined as a union between a man and a woman in the constitution. Latvia is another country where a case was initiated on the compliance of the convention at the Constitutional Court. However, the court decided that the provisions of the convention comply with the Latvian constitution[5] last week, but this didn’t hamper the emergence of similar political ramifications in public debates. The “exemplary country” –in this respect– Bulgaria found the convention unconstitutional in July 2018, pronouncing that the definition of gender drawn in the convention contravenes the binary understanding of sex established in the Bulgarian constitution[6].

Different value and belief systems taking each other as “examples” and supporting one another  when it comes to certain topics  proves how global and extensive the assault in question is. The statement by Turkey’s Directorate of Communications following the reactions to the president’s decision mentioned that Turkey is not the only country that has serious concerns about the convention, listed the EU countries who haven’t signed the convention and put special emphasis on Poland’s case[7]. Then it became evident that Poland[8], which was worthy of this special emphasis, was already preparing an alternative international convention. Poland’s Ministry of Justice called a group of countries including Croatia, Czech Republic, Slovakia, and Slovenia to prepare an alternative to the Istanbul Convention. Some countries stated that either they haven’t received such a call, or they won’t support it, but the call emphasizing international coexistence was rather interesting. Romanowski who made the call had written “In our times, the defense of the family requires, in my opinion, not only national regulations, but also international solutions developed in a larger group of European countries.”[9] Even though it is hard to predict the future of its international presence, Poland proposes a Family Rights Convention as an alternative to the Istanbul Convention titled “Yes to Family, No to Gender”. This project has already been accepted by the Polish parliament and is awaiting sub committees’ approval[10].

In short, the Istanbul Convention touches upon multiple aspects of the recent paradigm shift. I think it is important to tackle this global assault in its entirety, in the context of this process in which we had to learn the contents of an international convention with every single detail. Before I end, I would like to also mention a group that adopts this approach. An international group that has been formed through the calls of the feminist and LGBTI+ organizations from Turkey on May 11th, on the 10th year of the Convention, started a campaign titled #United4IstanbulConvention[11]. As the initiators of this campaign we have believed from the start that the withdrawal from the Istanbul Convention should be discussed at transnational level, and we’re working as hard as we can to make that possible.

It seems like we found ourselves back at the most basic struggle, the fight for equality, under the increasing pressure and attacks. But we’re saying that we’re no longer demanding equality between women and men, but an equality that surpasses the binary gender regime. We defend our rights by acknowledging the intersections of different power relations, drawing relationships between male violence, all sorts of violence and power relations, aiming to undermine those powers; by recognizing the positions of different political actors carrying on this struggle and their right to determine politics, and by never limiting the struggle to national borders. Turkey withdrawing from the convention will directly affect the lives of women and LGBTI+ individuals and encourage the other governments who are already disputing the convention. But we’re determined to grow our struggle and continue to widen our horizons, space, and coexistence in spite of those who oppress us. We will not give up on the Istanbul Convention.

[2] Fıtrat is an old word which means “law of nature / disposition” and  has religious associations. President Erdoğan stated that men and women cannot be treated equally because it goes against fıtrat in a speech he gave in 2014. His words caused a stir locally and globally. (translator’s note)

Our existence is resistance: Hayriye Kara of KAOS GL tells the significance of the Istanbul Convention

Pink Life LGBTI+ Solidarity Association: “The decision to withdraw from the Istanbul Convention is the declaration of what is obvious.”

The Case of Leftist Men Or: How not to make an...

Sexism in the DSM diagnostic system

What does crying tell us?